The LG G6 smartphone was launched in India last month.

LG India has completed 20 years in India and to celebrate its anniversary, the company has announced a special discount for the LG G6 smartphone. As part of the offer, the LG G6 is now available for a flat discount of Rs 10,000 on Amazon in India. To buy LG G6, now you have to pay Rs 41,999 as against its initially launched price at Rs 51,990.

The company has confirmed the discount via its official Twitter handle today. However, LG has not revealed the duration for the discount offer. It is also to be noted that this is the third time the LG flagship smartphone has got the price cut. Just last week, we reported of LG G6 receiving a discount of Rs 9,000 and was available on Amazon for Rs 42,999. Earlier, the phone was available for Rs 41,990 from a Mumbai-based phone retailer known as Mahesh Telecom. 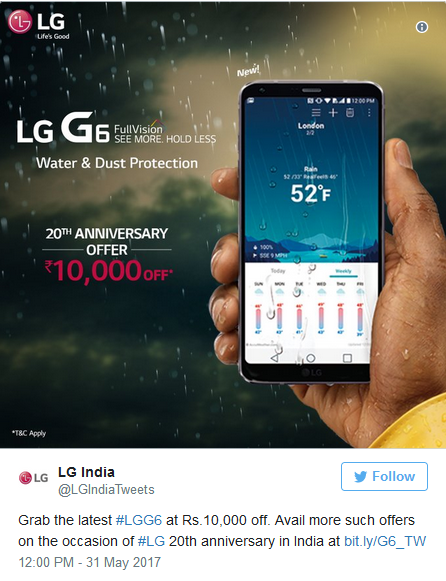 To recall, the smartphone was first unveiled during Mobile World Congress 2017. As far as specifications are concerned, the LG G6 feature a 5.7-inch 18:9 QHD+ FullVision display with a resolution of 2880 x 1440 pixels and is powered by a Qualcomm Snapdragon 821 processor. It comes with 4GB LPDDR4 RAM and 32GB/64GB on internal storage, which can be further expandable up to 2TB via MicroSD card. It runs on Android 7.0 Nougat operating system and is backed up by a 3,300mAh (embedded) battery with Qualcomm Quick Charge 3.0 support. It also houses a fingerprint scanner and comes with USB Type-C 2.0 (3.1 compatible) as well.