An unannounced Huawei smartphone with model name ‘Huawei CPN-AL00’ has been spotted on a GeekBench benchmarking website. The listing has spilled some beans on the expected specifications of the upcoming smartphone.

In the GeekBench listing, the Huawei CPN-AL00 got 667 points in single-core test and in muli-core test it received 3244 points. As per the listing on Geekbench, the Huawei CPN-AL00 has 3GB RAM and Qualcomm Snapdragon 430 1.40 GHz octa-core processor. The handset is based on the Android 7.0 Nougat operating system. 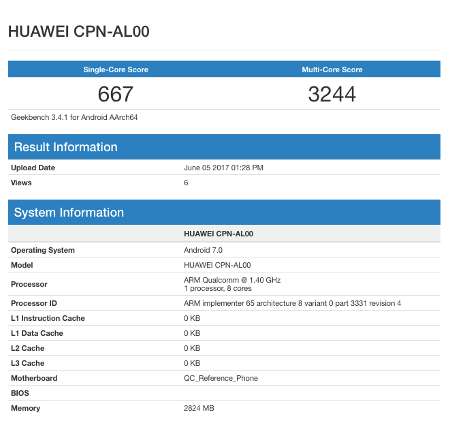 Meanwhile, Huawei’s sub-brand Honor is expected to launch the Honor 9 smartphone on June 12. The device is reported to boast a 5.2-inch Full HD display and will be powered by the latest Kirin 960 processor. On the camera front, the phone is reported to boast a dual rear camera setup, which consists of 20-megapixel and 12-megapixel sensors. For the front, there might be an 8-megapixel shooter for selfies and video calling. One could expect a 3100 mAh battery as well on the Honor 9.