HTC working on a new mid-ranger codenamed as Ocean Life

Just like HTC U11, the new mid-range smartphone will come loaded with Edge Sense feature

HTC recently launched its flagship device, the HTC U11 and it is now reported that the brand is working on a new mid-ranger codenamed as Ocean Life.
According to a tweet by LlabTooFeR, the smartphone will sport a 5.2-inch Full HD display. Just like HTC U11, the new mid-range smartphone will come loaded with Edge Sense feature. For the unintended, the Edge Sense feature basically allows users to interact with the edges of the smartphone. A simple squeeze will allow users to interact with the side panel that allows you to initiate actions like take photos, open Facebook, or launch any of your favourite apps. 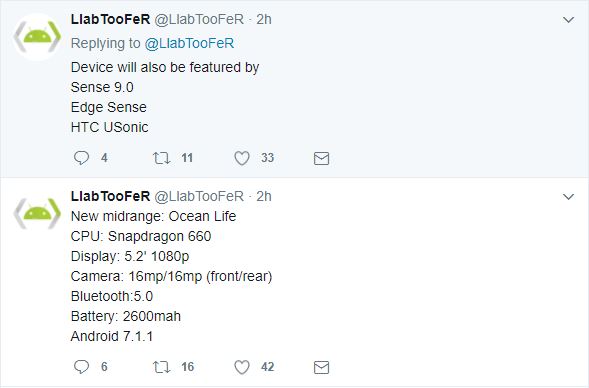 One can even use squeeze functionality to use voice to text feature. One needs to Lightly squeeze, speak your message and send your texts on the go. And because Edge Sense is based on the actual pressure applied to the side of the device, it can be used in nearly any condition – including while wearing gloves or in weather such as snow or rain that would normally be a challenge with capacitive buttons.
The phone is reported to feature HTC USonic as well and it runs on the latest Sense 9.0 UI, which is based on Android Nougat. On the hardware front, the device is expected to be powered by the latest Qualcomm Snapdragon 660 chipset and it will be backed by a 2,600mAh battery. On the camera front, there will be a 16-megapixel rear and front cameras. However, the leak did not reveal the pricing and other specifications of the device, so stay tuned with us more details about the upcoming Ocean Life.
Note: The lead image is for representational purpose only