The device has been spotted on the GFXBench, which reveals almost all the specifications of the upcoming flagship from HTC.

As we are heading closer to the launch of HTC’s upcoming flagship smartphone – HTC U 11 – rumours about the device are doing rounds in the tech town. The device has been spotted on the GFXBench, which reveals almost all the specifications of the upcoming flagship smartphone from HTC.
According to the listing, the smartphone will boast a 5.5-inch Quad HD display with a screen resolution of 2560 x 1440 pixels. Under the hood, it will be powered by the latest Qualcomm Snapdragon 835 processor clocked at 2.4GHz along with Adreno 540 GPU. The listing further reveals that the smartphone will be backed by a 4GB of RAM and 64GB of internal storage out of which 54GB will available for the users. 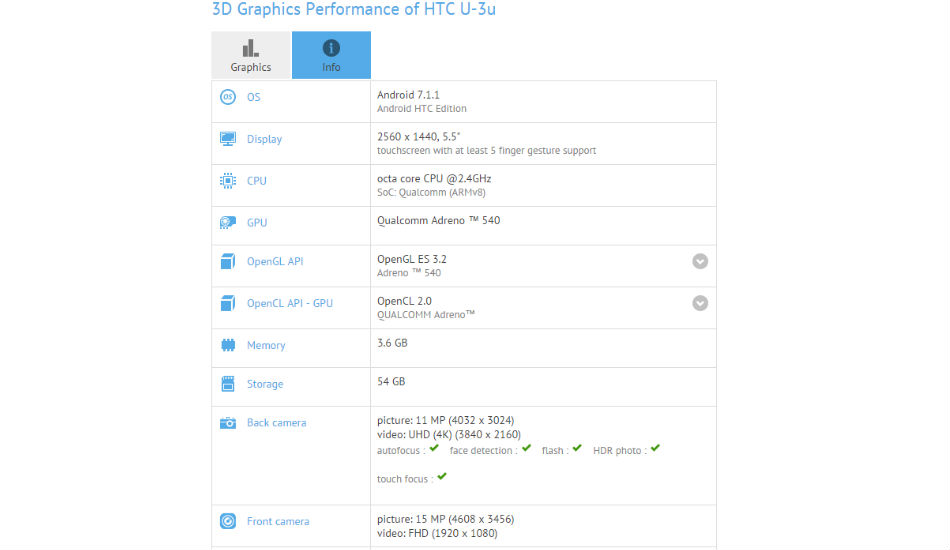 On the camera front, the listing reveals that it comes loaded with a 12-megapixel rear camera with 4K recording, auto focus, HDR photo, LED Flash and face detection. However, these are some basic features, which are being listed on the benchmarking site. The device is also rumoured to come with advanced HDR setting such as HDR+, Smart Video Zoom, 3D Audio and Hi-Res recording features.
Similar to what we saw in the U Ultra, the HTC U will come with an option record Hi-Red audio and 3D Audio. The HDR+ “Real-Time HDR scene detection”, which might improve the quality of the images. For the front, there is a 16-megapixel shooter for selfies and video calling.
The listing further reveals that it run on the latest Android 7.1.1 Nougat and it is reported that Sense 9.0 will run on top of it. However, there is no mention of the battery size, but previous rumours indicate that it will be juiced up by a 3000mAh battery with Qualcomm Quick Charge 3.0.
If we go by the rumours than HTC U 11 is turning to be a good contender to the likes of Samsung and LG. The major highlight of the device would be Edge Sense technology. According to various rumours, users need to short squeeze the Edge Sense in order to perform tasks like launch Camera, Google Assistant, HTC Sense Companion, or even turning on the Wi-Fi Hotspot. There is also an option to long squeeze as well, which might have some different functionality as well.