Amazon India is also offering Rs 1,500 cash back on the purchase of the iPhone 8 using an ICIC Bank Credit Card's EMI payment option.

The Apple iPhone 64GB which was launched in India last year for Rs 64,000 has now received a price cut of Rs 9,000 on Amazon India. After the price cut, the smartphone is retailing at Rs 54,999 on Amazon. The smartphone comes in Space Grey, Gold and Silver colour options. It come in two storage options: 64GB and 256GB.

Amazon India is also offering Rs 1,500 cash back on the purchase of the iPhone 8 using an ICIC Bank Credit Card’s EMI payment option. 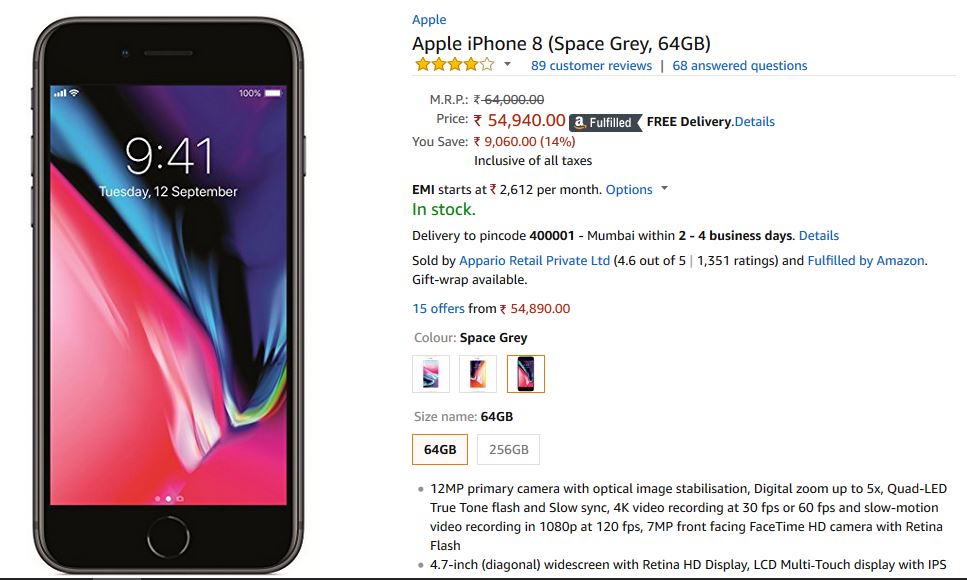 Recollecting some key specs, iPhone 8 sports Retina HD displays with True Tone feature that adjust the white balance of the display to match the surrounding light for a more natural, paper-like viewing experience. The iPhone 8 features a 4.7-inch screen. The iPhone 8 sports a single 12-megapixel sensor at the rear panel.

The iPhone 8 is powered by the latest A11 Bionic chipset, which the company’s claim is “the most powerful and smartest chip ever in a smartphone.” The chipset features two performance cores that are 25 percent faster and four efficiency cores that are 70 percent faster than the A10 Fusion. A11 Bionic also integrates an Apple-designed GPU with a three-core design that delivers up to 30 percent faster graphics performance than the previous generation. All this power enables incredible new machine learning, AR apps and immersive 3D games.