The Airtel app store offers more than 71,000 applications, making it the largest app store in the country, claims the operator. 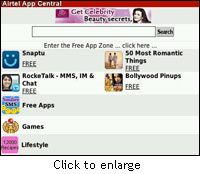 Bharti Airtel has announced that its applications store Airtel App Central, has seen 13 million application downloads within four months of its launch. Airtel says that on average its mobile subscribers downloaded at the rate of 1.2 applications per second over four months.
Bharti Airtel had forayed into the -growing mobile applications market by launching Airtel App Central in February. It had claimed more than 2.5 million application downloads within 30 days of launching the store.
While in March the company’s app store had over 1,500 apps available for download across over 550 devices, today the operator offers more than 71,000 apps for download across 780 mobile devices.
Atul Bindal, president, mobile services, Bharti Airtel, said in a statement, “Airtel customers have identified our easy single click purchase mechanism as the most popular aspect of the store. With over 32 per cent of downloads paid for, App Central is also emerging as the preferred destination for existing and upcoming developers in India and the world over.”
Airtel’s mobile customers can choose from apps in 25 categories, including social networking, games, business, news, sports, health, education and travel. Customers can visit Airtel Live on their mobile phones to browse App Central, or SMS a toll free number to receive App Central’s URL.