How to enable Google Assistant on your Android smartphone

Note that, you need to be on Android 6.0 Marshmallow or above to enable Google Assistant with this trick.

Google Assistant was first rolled out back in October 2016 when the search engine giant unveiled their Pixel and Pixel XL smartphones. Back then, Google firmly confirmed that the new AI-powered personal assistant will be limited to select Google devices which were quite surprising after even Nexus devices didn’t get to taste the Google Assistant. However, things begin to change gradually as last month at the Mobile World Congress, various vendors such as LG, Nokia and Lenovo (for Moto devices) announced that their upcoming smartphones will come with Google Assistant inbuilt. Soon after, the US-based multinational announced that Google Assistant will finally make its way to Android Marshmallow and Nougat devices. However, the update was scheduled to roll out only for English (US) regions with other English variants along with German soon to follow. However, we got the hand of a nifty little trick which actually enables Google Assistant on any smartphone running Android Marshmallow and Nougat. Follow this Guide.Note that this trick might not work on your device as it didn’t work on some of our devices.

Step 1:Make sure the Google Play Services on your devices is updated to version 10.2.98 or later. If not, either download the latest version from here, or wait for your device to update it automatically.

Step 3:Now make sure your Google App is updated to the latest version. If not, just go to Google Play Store and update the Google App. My device was running version 6.13.25.21 at the time of writing this story. 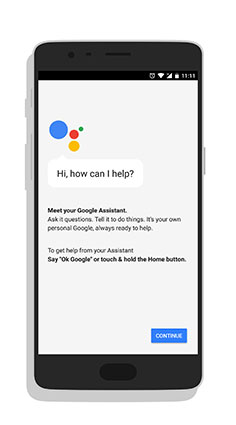 Step 5:Once done, just tap and hold the Home Button of your device and you will see a message pop from the bottom asking you get started with ‘Google Assistant’. Enjoy!