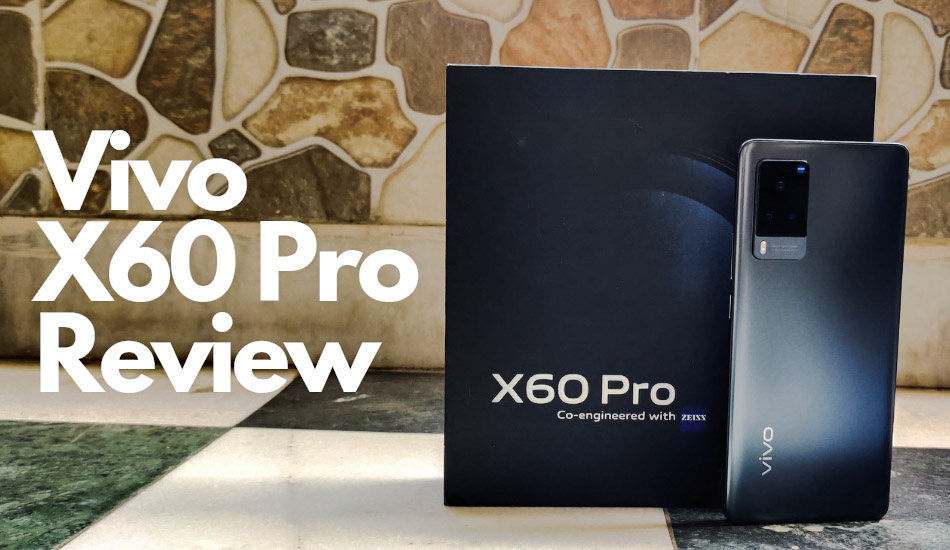 Vivo X60 Pro has been launched in India but is a little different from the variant launched in China. Let's see what Vivo's next flagship has in stores for us

Vivo X60 Pro has stepped foot in the Indian market as a flagship device but this model of the Vivo X60 Pro is different than what was launched in China. The one launched in India is powered by a Snapdragon 870 SoC compared to the Exynos 1080 5nm SoC that powers the chinese variant of the smartphone.

The Indian variant runs on FunTouch OS 11 whereas the chinese variant runs on Vivo’s newest OriginOS. The price of the smartphone is set at Rs 49,990 for the Indian region. Does the differences between the variants mean the smartphone differs in performance as well when compared to the chinese variant? Let’s find out in our review of the Vivo X60 Pro. 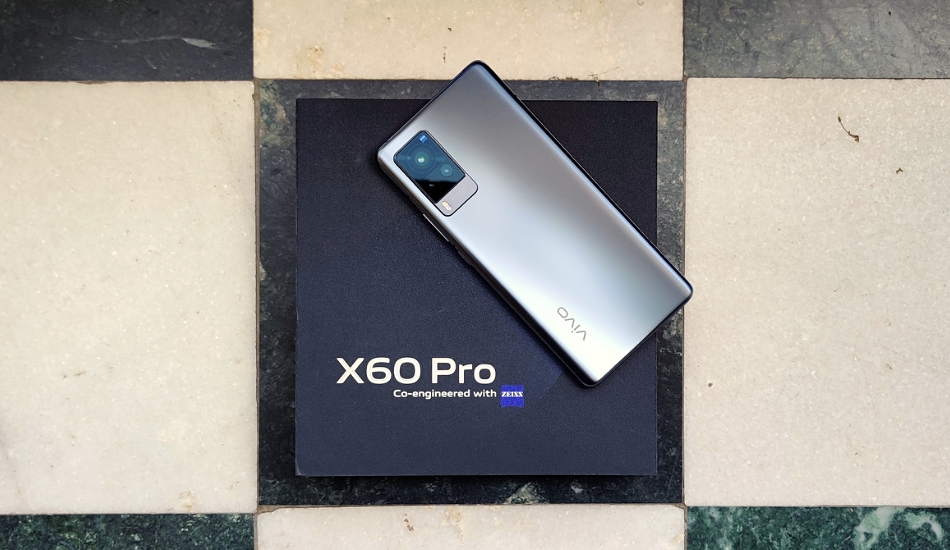 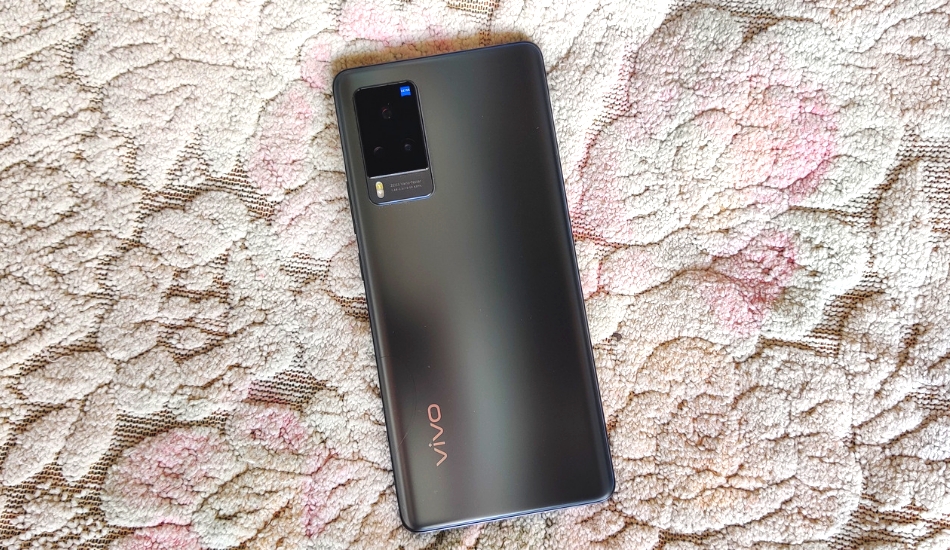 The Vivo X60 Pro comes in a big square box with the ultimate premium feel while you unbox it. The variant we got was a grey coloured one with 12 gb of RAM and 256 gb of storage. The phone when held in hand gives out a very premium feel with its matte finish sides and the rear glass as well which is a frosted matte one. The phone, when put on a flat surface, wobbles a lot because of the considerably big camera bump. 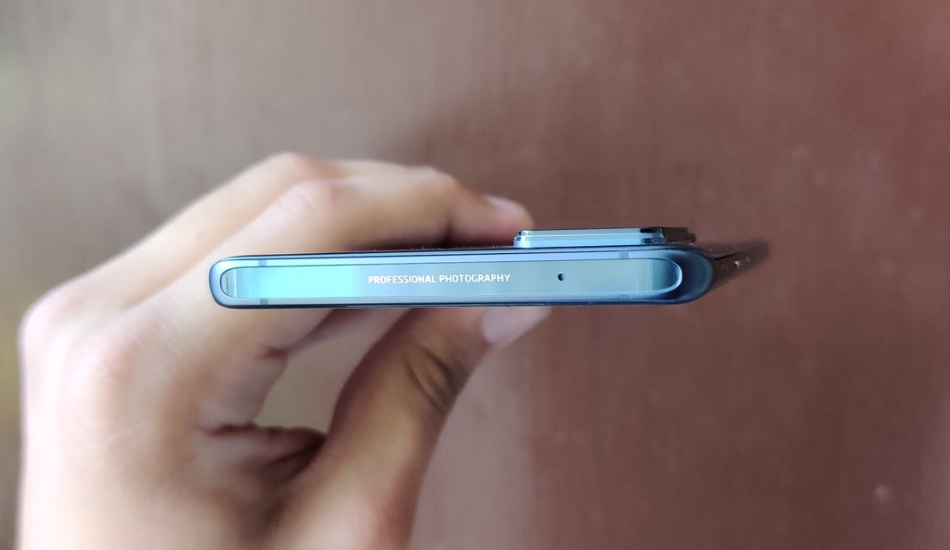 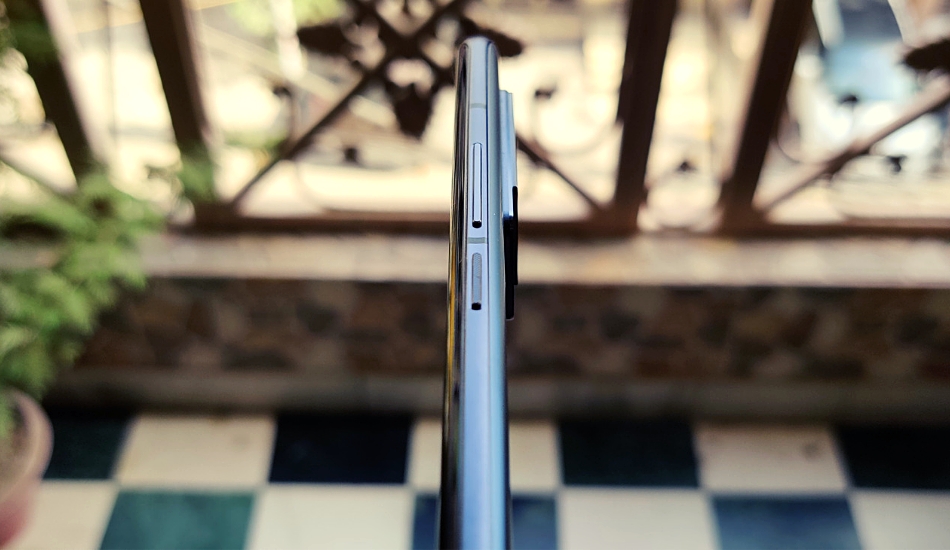 The volume and power buttons on the right felt a bit wobbly but gave a tactile and clicky feel. The power button even has a textured finish which is a nice touch. You get a ‘Professional Photography’ branding up top along with a mic. On the bottom you have a single speaker, a mic, a Type-C port and a SIM tray. As there’s no 3.5mm headphone jack, you get a Type-C to 3.5mm Audio adapter as well included in the box so you can connect the wired earphones with the Vivo X60 Pro. 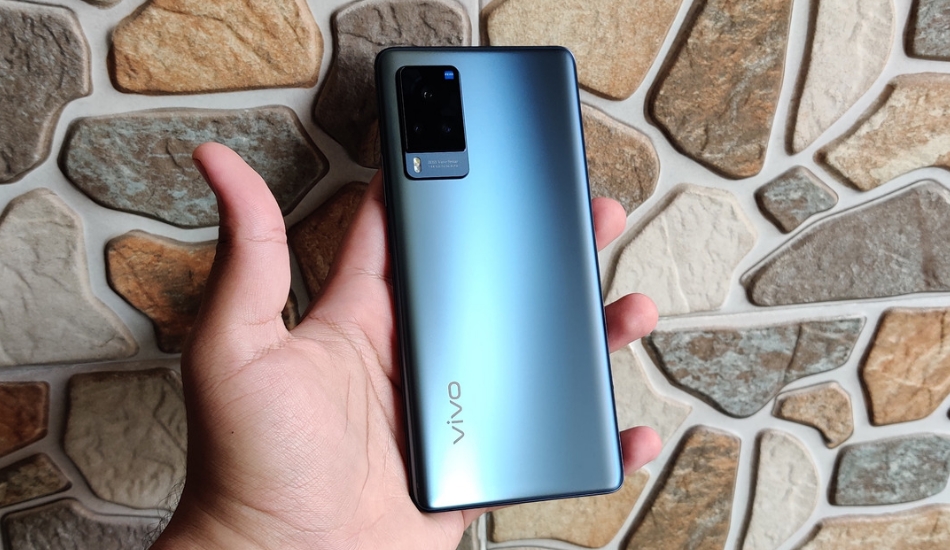 The phone looks and feels super sleek and modern in the grey colour and this is the one to go for if you are looking for a professional look.

Display: It’s gorgeous to look at 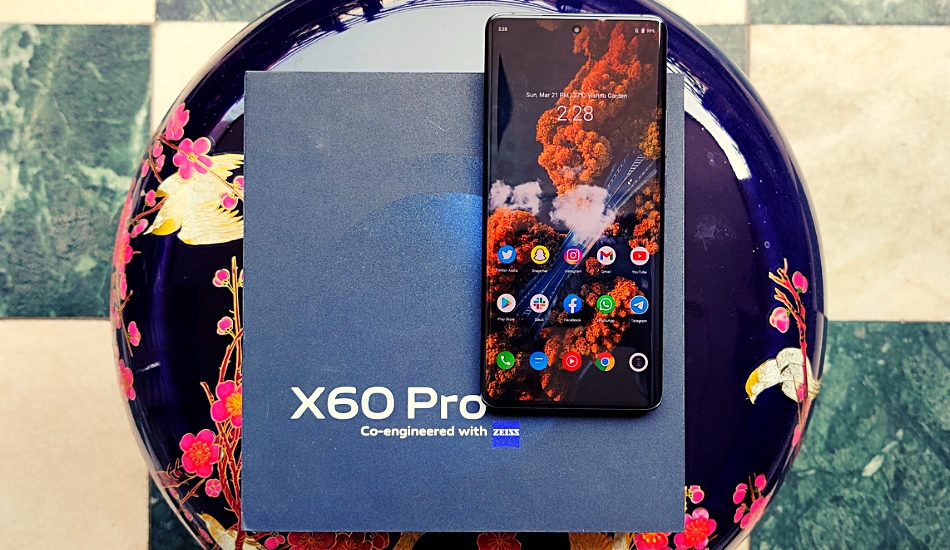 The Vivo X60 Pro sports a 6.56-inch E3 AMOLED display and is a curved one. It comes with a resolution of 2376 x 1080 pixels and also comes with HDR10+ support, 120Hz refresh rate and 240Hz touch response. It also has an under-display fingerprint scanner.

The fingerprint sensor works well and quickly recognizes the fingerprint without any issues. The display on the X60 Pro looks gorgeous and you can gaze at it for hours. The punchy colours, deep blacks, a 120Hz refresh rate along with 240Hz of touch response just keeps on adding to the experience. 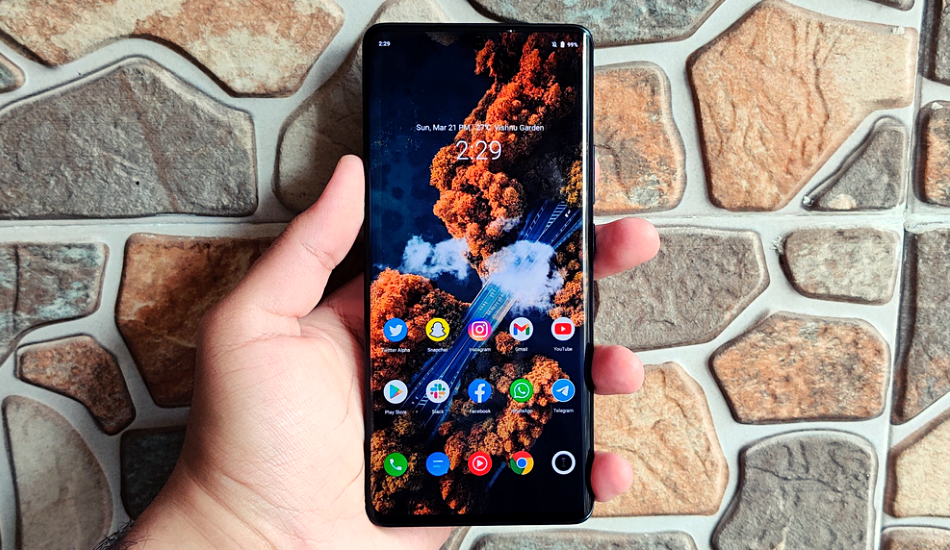 Every element on the display looks sharp and even the brightness gets high enough to keep things visible when you are under direct sunlight. The curved display flows over the edges and there were no accidental touches. Curved displays are a topic of debate. While some don’t like them at all, others feel it makes the phone feel more premium and adds to the looks. I belong to the latter group and I find curved displays appealing. There’s nothing I could find which this display did wrong.

Performance and Software: Takes away some of the fun

The Vivo X60 Pro aims to target the flagship phones available in the market. As a result, the smartphone has been equipped with the latest Qualcomm Snapdragon 870 SoC clocked at 3.2Ghz along with 12GB of RAM. 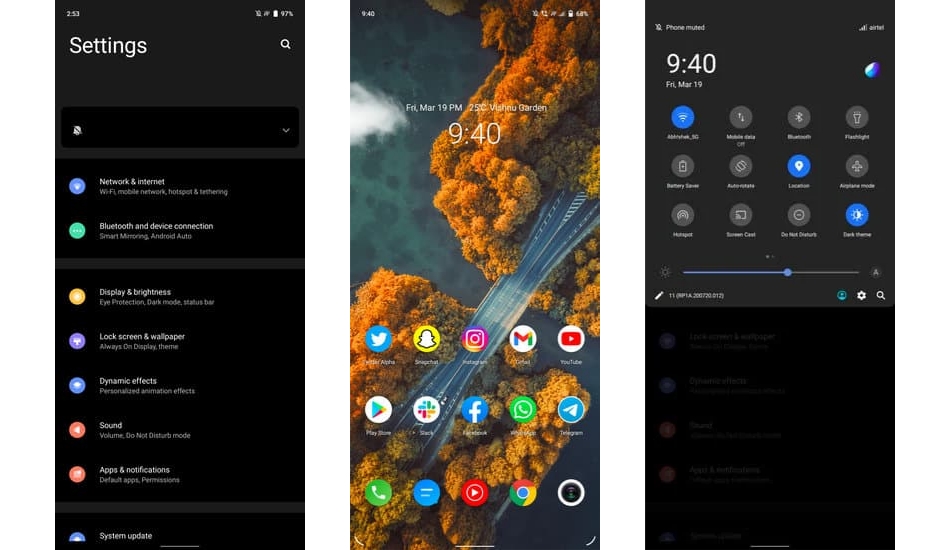 This phone flew through everything I threw at it. Be it tasks that are power-consuming or locking apps in memory, the X60 Pro handled everything with breeze. The app launches were quick, and the RAM management wasn’t aggressive which was a good thing. The phone kept necessary apps in memory making them launch faster whenever I needed them.

Even gaming on the X60 Pro was a fun task to do. Games including Call Of Duty Mobile, Asphalt 9 and some others played perfectly fine without any frame drops, and that too at max graphics coupled with max fps.

Now, the only thing which disappoints me was the software. The X60 Pro runs on FunTouch OS 11 based on Android 11. There are some inconsistencies in the software that restricted the phone from feeling as flagship-grade as it should have felt. First of all, the amount of bloat the device comes filled with is unbearable. Apps such as Moj, and others were pre-installed when I booted the device for the first time.

You don’t expect ads and this much bloatware when you purchase a phone that costs this much. Half of it is uninstallable but you will have to live with the other half. The inconsistencies I talked about include elements overlapping each other, the conversations which I set to priority reverting back to normal, no option to show more notification icons in AOD apart from phone, messages, and WhatsApp, and some more.

One thing I did like though was the level customization on offer. From fingerprint animations, to home screen lock and unlock effects, you get everything. There’s a gaming mode as well to help you game better. 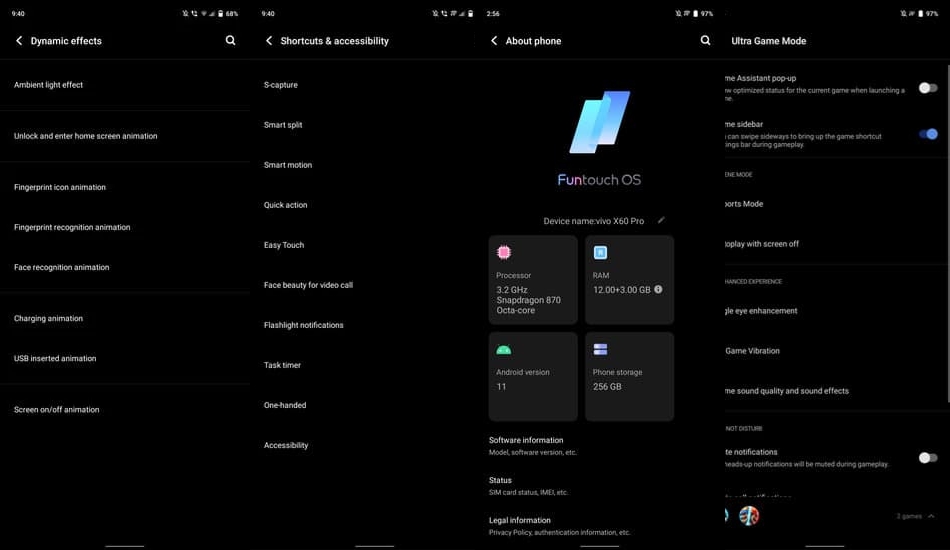 Talking about connectivity, the Vivo X60 Pro performed perfectly fine through voice calls. The other person sounded loud and super clear and on the receiving end, things sounded fine as well. Wi-Fi and Bluetooth connectivity weren’t an issue as well.

I would have been much happier if the phone came with OriginOS but unfortunately we have to live with what we have.

Haptics and Audio: Could have been better

Haptics and Audio play a major role in making a flagship smartphone feel more… flagship. The Haptics on this thing are not as strong as you would expect from a top-grade smartphone but it’s decent and doesn’t rattle like some other phones. You can feel the phone vibrate with every key press on the keyboard and that was on-par for me.

The Audio on this device is a bit disappointing. Most of the flagships including those from Samsung, OnePlus, Oppo, Realme, Xiaomi, and even Asus, feature stereo speakers but the X60 Pro has a single mono speaker on the bottom and even that single speaker sounds bad. During our testing, the speaker didn’t get as loud as it should have been and sounded a bit muffled. At the highest volume, I even faced sound distortion which was quite a bummer.

Battery Life: Good for the price

Vivo X60 Pro packs a 4300mAh battery under the hood with 33W flash charge support. The battery on the Vivo X60 Pro barely lasted me a day with about 6 hours of screen-on time. I could stretch it to 7 hours with light usage. 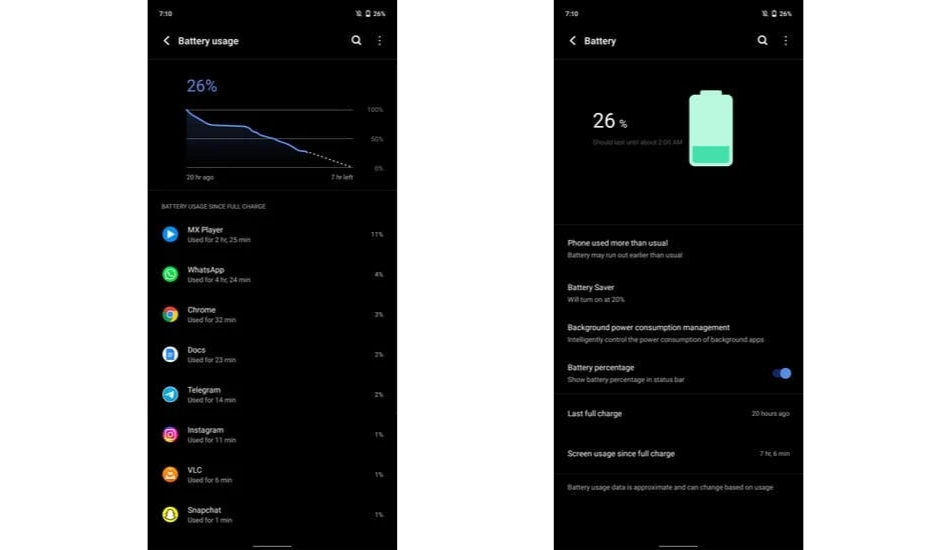 I could kill the smartphone before my day ended with heavy usage. My usage included a bit of gaming along with a lot of browsing, YouTube Video Streaming and WhatsApp chatting. Even the brightness of the smartphone was kept at more than half level at all times.

As for charging speed, the phone can charge from 20 – 100% within an hour which is not bad. A 4300mAh battery lasting this long with a 120Hz display is fine and you can’t expect it to last longer than it already is. 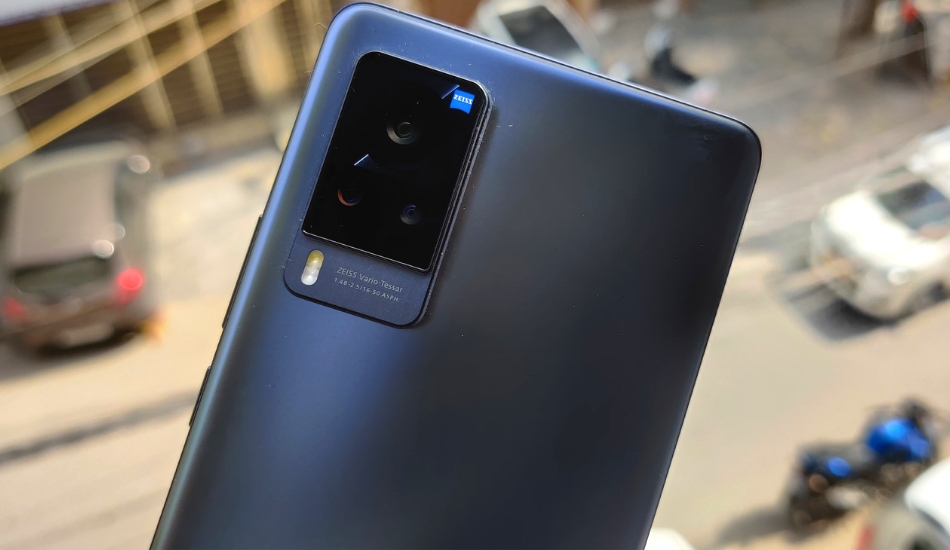 The Vivo X60 Pro sports triple cameras at the back in a rectangular array along with the Zeiss logo as the cameras on the smartphone feature Zeiss optics lenses. These include a 48MP primary camera with Sony IMX598 sensor with f/1.79 aperture. It also features second-generation 4-axis OIS anti-shake feature which the company calls as Micro-Gimbal Stabilization 2.0.

The camera app has a simple UI with 5 main tabs at the bottom including Night mode, portrait shot, normal photo, normal video and a ‘more’ tab that houses all the additional modes including slo-mo, a dedicated 48MP mode, super-moon, pro sports, astro, panorama and bunch of others.

Other features including HDR, AI Scene optimization, Super Macro are also included. The app also has a full set of filters for changing the look of the final photo. All in all, the camera app is loaded with features and various modes so you don’t miss out on nothing. 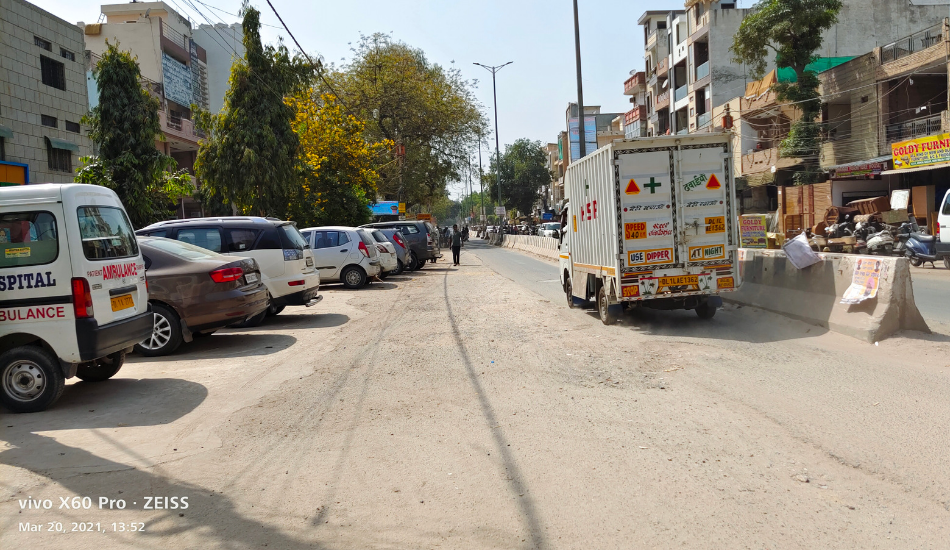 Talking about the actual shots from the primary sensor, the dynamic range seemed to be pretty good along with plenty of details and natural looking colours. Even if you zoom in, you can notice each of the leaves on the tree and there was no blurriness at all. 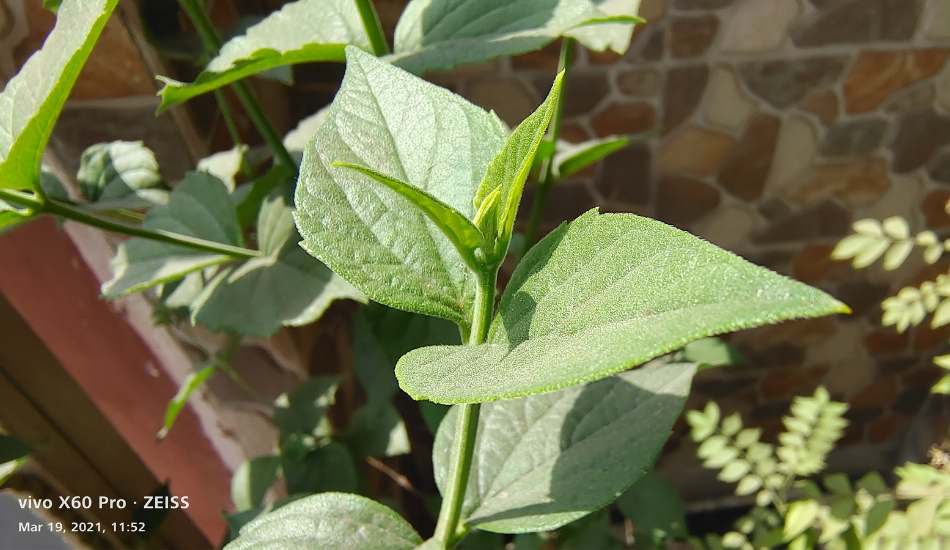 When taking portrait shots, the camera was quick to focus on the subject. Not only while clicking portraits, but even while using the phone normally, the cameras quickly focused on what I intended it to focus on. For portraits, there was again a good amount of detail be it under artificial lighting or outdoors. The edge detection was also on point. 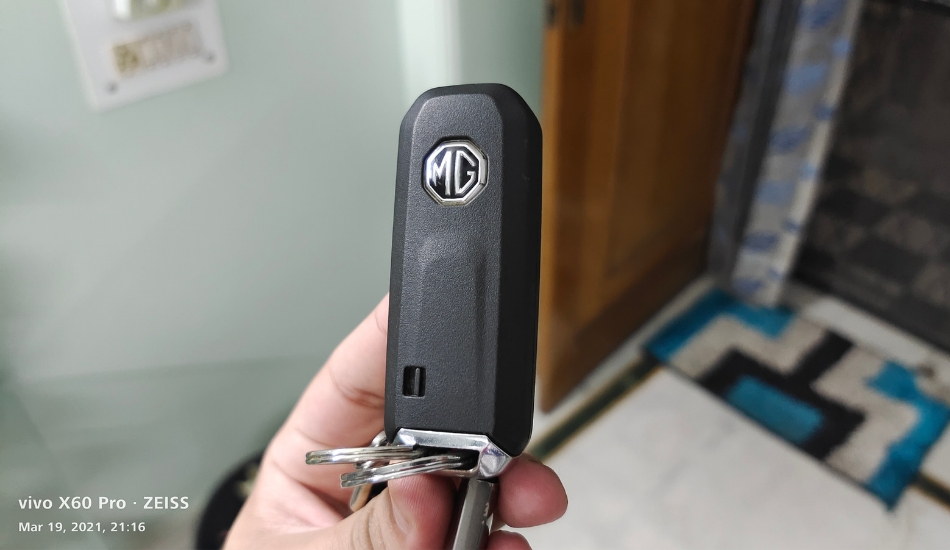 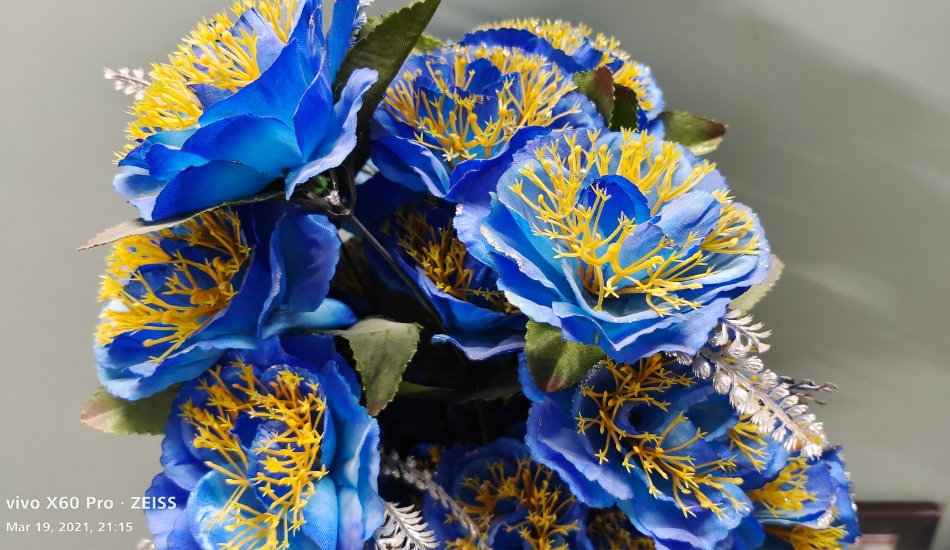 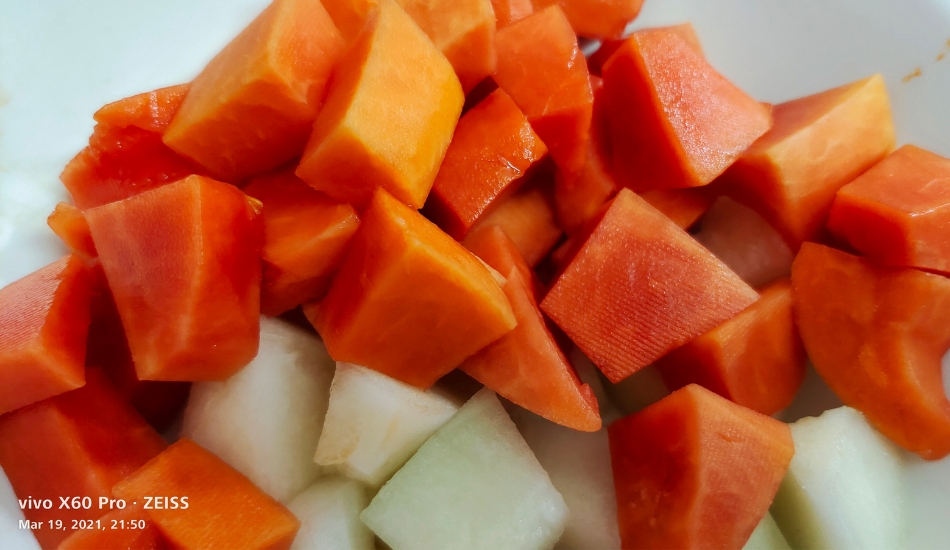 Photography under artificial lighting wasn’t a pain either as the phone focused on the correct subject with a good amount of blur in the background along with natural and good looking colours. Though, with AI Scene enhancement ON, the photos were a bit oversaturated at times. For example, the photo I have clicked above, you can see how the pieces of the fruit have been over saturated. 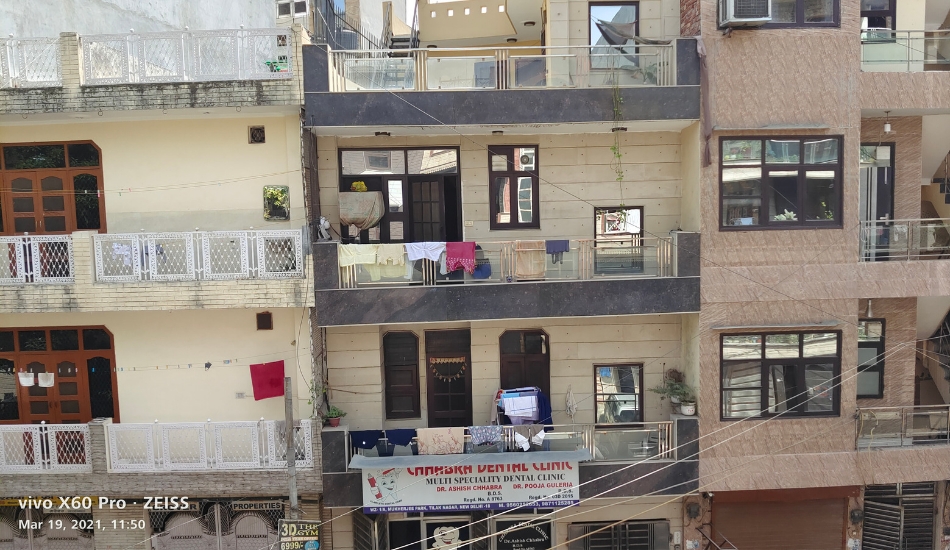 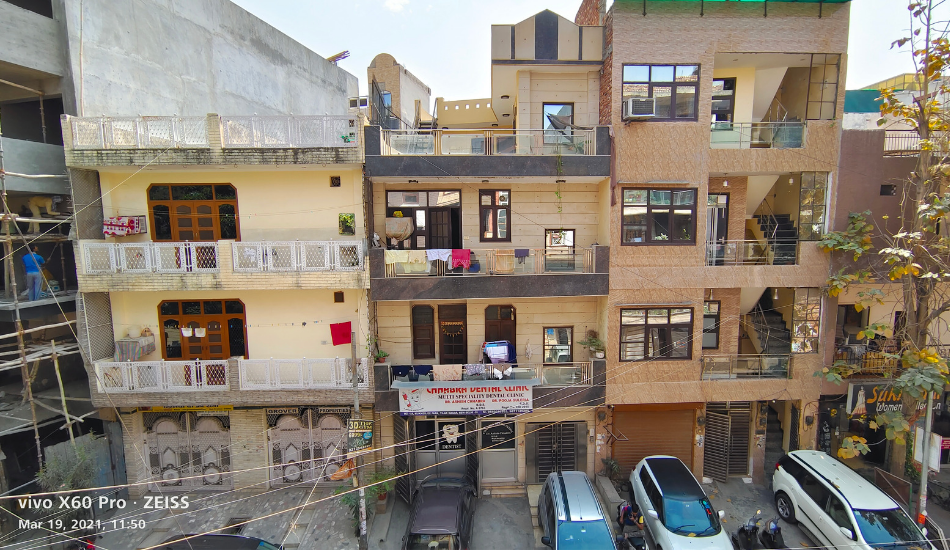 Coming to wide-angle shots, I couldn’t notice much colour shifting when compared to the photos from the primary sensor and that is great. But, the fish-eye effect on the edges was quite a lot which I hadn’t expected. The photo seemed to stretch a lot from the edges. Usually OEMs add a feature where there is software-level fish-eye effect correction but I couldn’t find anything as such on the X60 Pro. 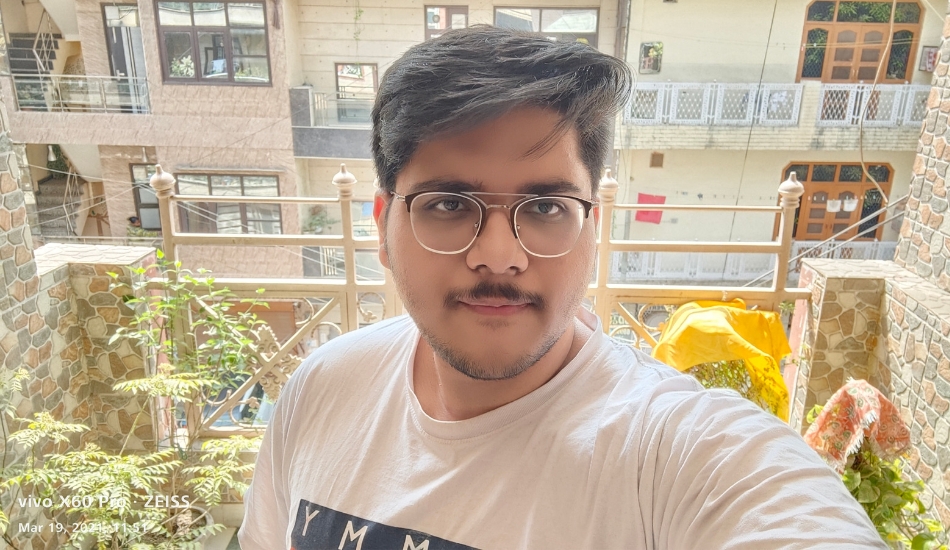 Selfies are as important as photos from the back camera and the Vivo X60 Pro gets them right too. The skin tone of the face looked natural and there was a nice level of detailing as well. The colours also looked great and the selfies from the Vivo X60 Pro are definitely worth sharing on social media if you ever need to do that.

The overall output of the camera was really good under every condition.

One can shoot with ultimate level of stability only at 1080p, no matter the fps, be it 30 or 60. Features such as Audio focus where the phone picks up audio only from the subject that is within the view of the camera, is also present. The colours, sharpness, and the detailing were all great in the video we shot on the Vivo X60 Pro.

The Vivo X60 Pro comes really close to being a perfect flagship. It has a great display, top-level performance and some great pair of cameras that help in elevating the experience to new heights. But compared to its main competitor - OnePlus 9R, the Vivo X60 Pro despite being a great device falls short on the pricing because of which it might fail to appeal to the audience.