Recently Indian tablet market saw a flood of low cost Android tablets as manufacturers trying to reap the benefit of the immense popularity Android has over other operating systems. 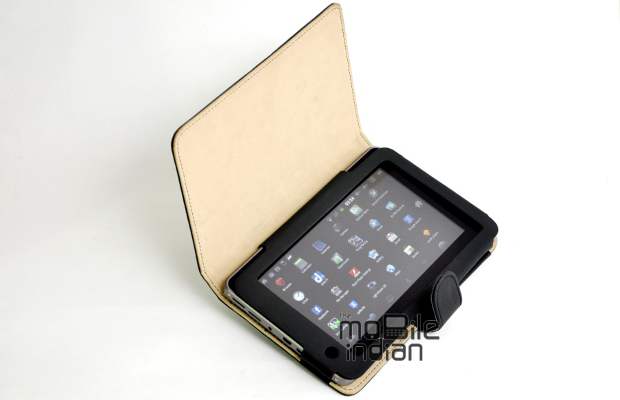 Chennai based iBerry India had also announced its entry in the Android tablet market last year with a 7 inch and a 10 inch Android tablet. The 7 inch capacitive touchscreen variant, named BT07i, is a limited edition variant and comes with impressive features and specifications.

Here’s how it performed when put to a grueling test.

The iBerry BT07i is positioned as a low cost tablet but the device certainly does not show any signs of being one. Its metal body makes the tablet quite sturdy while giving it a slim look. The graphite colour finish of the tablet also to a great extent helps in giving the much needed appeal for eyes. 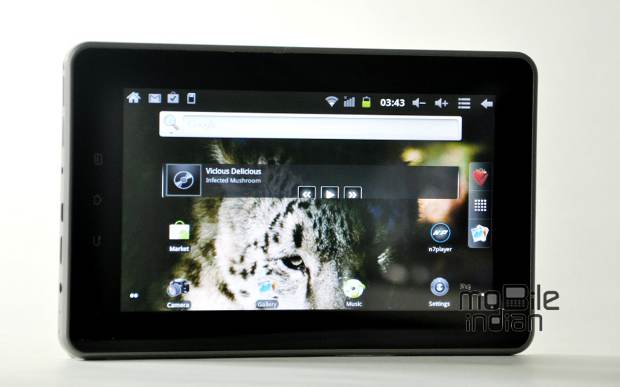 The volume rocker and the power key have been placed on the lower right hand side of the iBerry BT07i for easy access. The chrome finish of the buttons further adds to the looks, giving the tablet a neat finish.

At 376 grams, the tablet is also light and thus is easier to hold for longer times. The edges, especially on the front side of the tablet however, are a bit too sharp and cause some discomfort while holding.

The iBerry BT07i borrows its design from tablets like Apple iPad but in a much smaller form factor. The bezel around the screen is quite small further helping in the reduction of the size of the tablet. The company is also providing a carry case along with the tablet but that is somehow does not fit perfectly. You may find it easier to operate the tablet without the case but the case in nonetheless good for storage and transportation of the tablet. 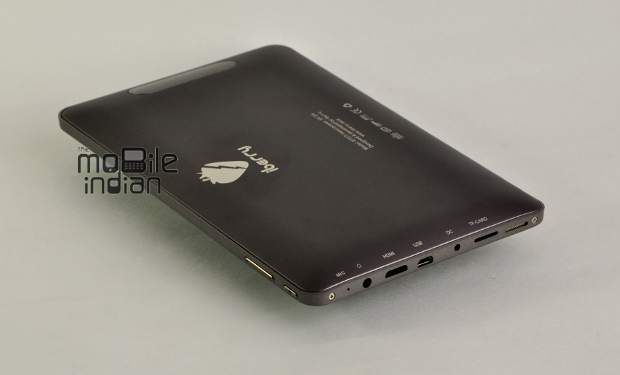 The device features minimum number of hardware keys and has three capacitive touch keys on the front which makes us believe that this device is actually best suited for Ice Cream sandwich but there has been no information on the update from the manufacturer till now.

The iBerry BT07i comes with a 7 inch display that features an 800 x 480 pixel resolution which is certainly on the lower side but since it is a low cost tablet we have no complaints. In terms of colour reproduction and brightness levels, the display is though highly impressive and it compliments every application or game that we played on this device. 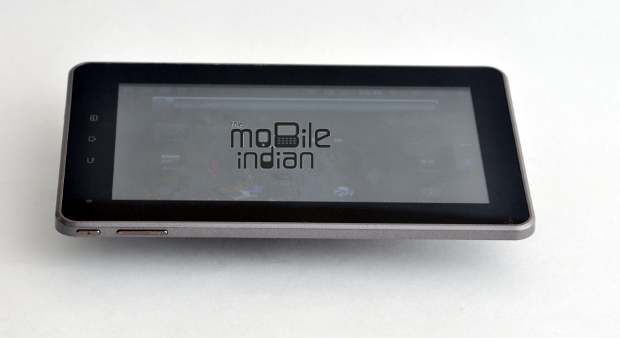 Although the resolution has been kept lower, the manufacturer has incorporated a multi point touch in this device that works for up to 5 points, which means the touch input system can identify and respond to 5 different touch points at any time. Five point touch is especially important for applications and games that require multiple inputs at times and is extremely good for speedy typing as well.

Another plus point for iBerry BT07i is the inclusion of a 400 MHz graphic processor which makes the device ready for full HD 1080p video playback, but then again the display resolution is too low for enjoying the High Definition content and users will have to make use of the mini HDMI port for enjoying content on a bigger screen only.

The device features a full metal body which is rock solid and sturdy enough to handle most day to day jerks and bruises. But the 7 inch display might be a little too fragile for a drop but no complaints here as most of the devices with bigger touchscreen today are prone to display damages during drops. 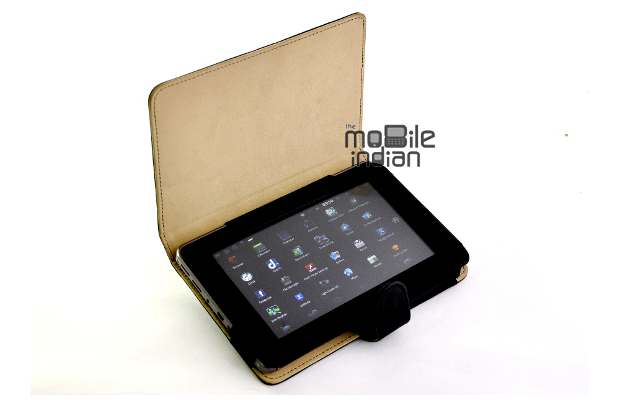 Overall the device has a good built quality that will last longer if you take good care of the device.

An ARM Cortex A8 processor running at 1 GHz makes the iBerry BT07i powerful enough to handle most tasks and multitasking requirements with ease. The 512 MB of DDR3 RAM further provides the tablet necessary muscle for speedier performance. 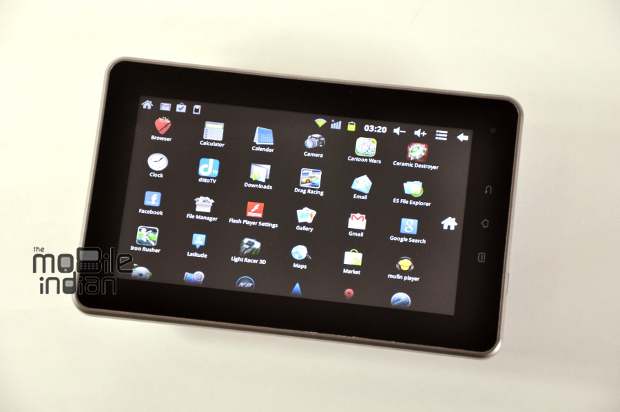 The device performed well and did not freeze during the review during which we tested a wide variety of applications on this device.

The operating system featured on the device is Google android Gingerbread 2.3 in its native state without any additional user interfaces being laid on top of it. But the interface on the tablet is quite similar to the one featured on resistive touchscreen version devices with dedicated keys for menu and volume control, placed above on the notification bar.

Having additional buttons does not cause any problem or harm but yes you sacrifice on precious space which hides notifications as the space runs out almost every time you install two applications or get an email.

The iBerry BT07i in terms of multimedia performance is great due to the inclusion of Gingerbread 2.3 as most of its applications can be installed on to SD card through some specialised applications. This will help you preserve the system memory for faster performance.

The device supports most audio and video codecs supported by the operating system natively plus users can easily download application from the Android Market as it is a registered Android device. The device features a 4 GB of internal storage memory which can be expanded up to 32 GB via SDHC cards as well. 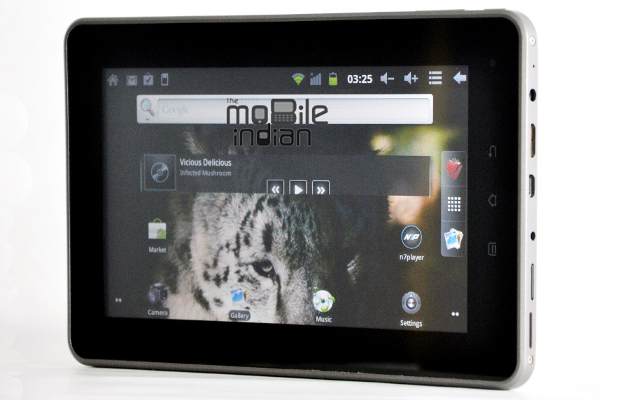 The tablet also features a nice 0.3 megapixel front facing camera that is good enough for video conferencing and that’s about it. The quality of the camera is good in bright light to medium light conditions while in low light the camera automatically adjusts the shutter speed to compensate the brightness loss but the low resolution really kicks in making it useless for taking pictures and videos alike.

You can use WiFi or USB dongles for internet connectivity on iBerry BT07i. WiFi is good and speedy while USB dongles provide speed based upon the data plan you have and till now the faster speed data plans cost slightly on the higher side. However, you need to purchase a USB adaptor to use data dongles as the box contents do not include one.

One of the biggest advantages of the iBerry BT07i is its battery that has impressed us highly. Its 3600 mAh battery is big and powers this device for abundant time for up to 5-6 hours of continuous usage or video playback or 1-2 day light usage.

The iBerry BT 07i although is from a less known device manufacturer and has its own set of issues to deal with like the low screen resolution and lack of a good camera, the tablet still makes up for all of that with the features and specifications it gives for a price tag of Rs 8,000. This device is good for people who want performance within a constrained budget but definitely makes a good buy for anyone. 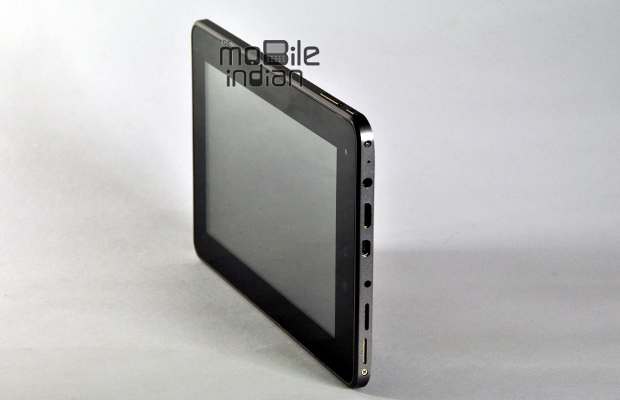 The company is offering doorstep warranty for the device and if you face any problem with the device, you can call the customer care and they will get the device collected from your place and will get it delivered right back at your doorstep once it is fixed.