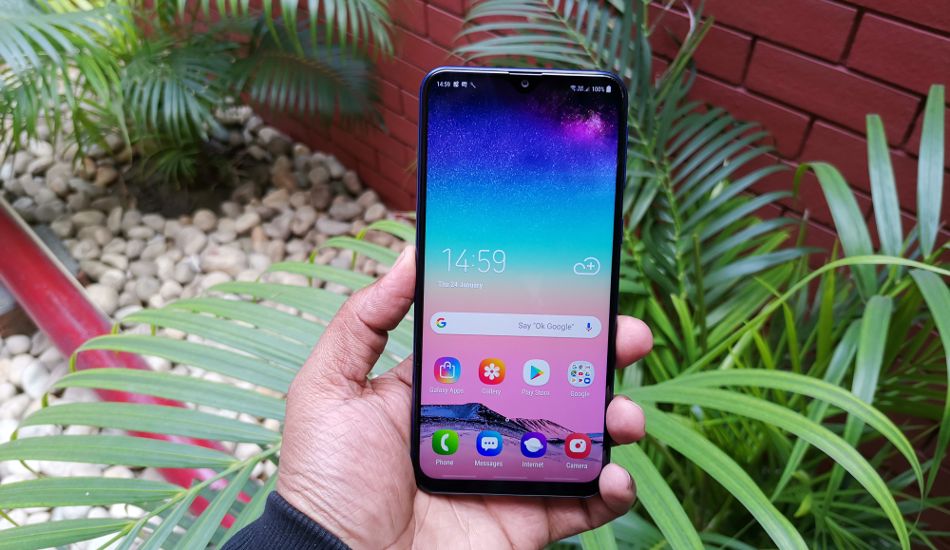 Let's talk about Samsung Galaxy M20 and how it competes with the rest of the competition.

For Samsung, the year 2018 was the time of reckoning. The brand lost its market share to the Chinese rival Xiaomi and its budget-centric series were not appealing to the masses. The brand did little to excite its loyal customers or the millennials who were looking smartphones in the budget segment.

However, it seems that in 2019 Samsung has finally come out from its shell to challenge the competitions with new products. And with Samsung Galaxy M10 and Galaxy M20, the company is now trying to capture the millennials. Both the smartphones have been priced quite competitively with Galaxy M20 costing you Rs 10,990 and Rs 12,990 for the 4GB+64GB variant and 3GB+32GB variants respectively. The Galaxy M10 comes with a price tag of Rs 8,990 for the 3GB+32GB variant and Rs 7,990 for the 2GB+16GB. In this review, we will be talking about Samsung Galaxy M20 and how it competes with the rest of the competition. So, without further ado, let’s get started. 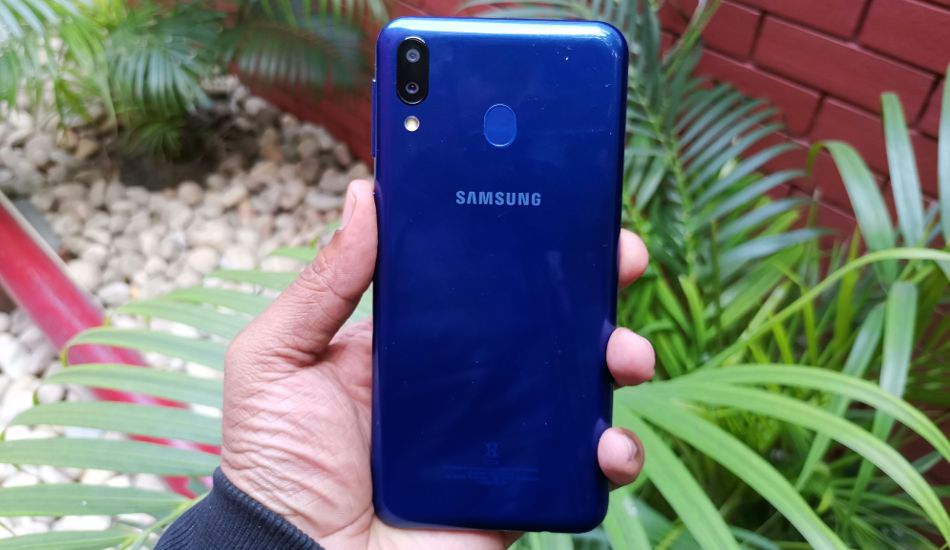 With the Galaxy M20, Samsung has finally entered the notch game, which it earlier refused. The smartphone is a first from the company in India that features new Infinity V-display. The new display is nothing but a waterdrop notch, which we have seen in different smartphones ranging from Asus, Realme and more in this price brand.

Coming to the Galaxy M20, it is not the best of what Samsung can offer, but the design is pretty much standard. You get a polycarbonate body at the back panel, which comes with a glossy finish. The finish looks similar to what we have seen in Asus Zenfone Max Pro M2, Realme U1 and more. However, the back is smooth and it doesn’t look cheap as compared to the competition.

The edges are curved, which makes it easier to hold in hands. The phone weighs 180 grams despite featuring a 5000mAh battery and it sure feels lightweight. The front panel features waterdrop notch with minimal bezels on the edges, giving an immersive feel. That said, the phone is prone to scratches and it attracts smudges, so a protective case is a must with this device. 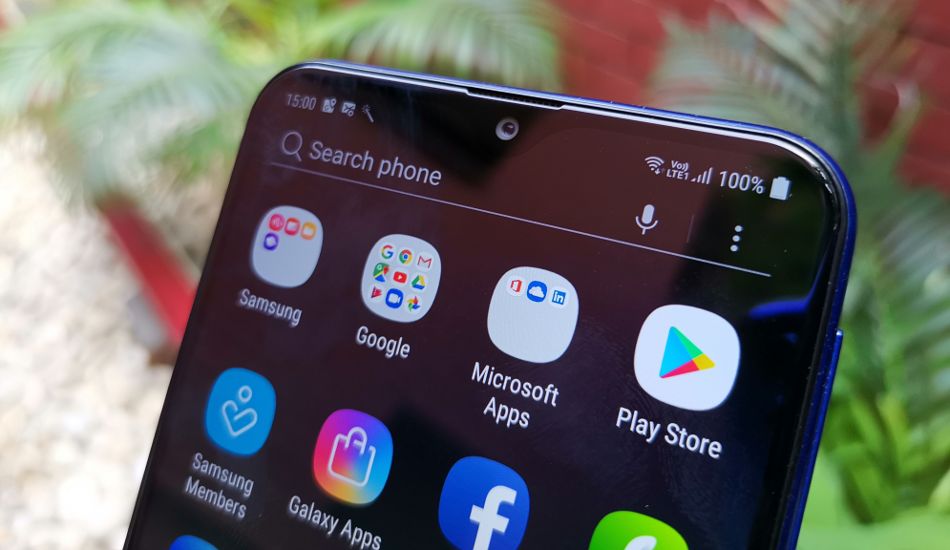 Coming to the display, the Samsung Galaxy M20 features a 6.3-inch Full HD+ PLS IPS Infinity V display with a screen resolution of 2340 x 1080 pixels. Samsung has used a TFT panel in this smartphone as opposed to AMOLED displays which are quite common in Galaxy J and On series. That said, the display is still one of the best displays present in this price band.

The screen delivers punchy colours with good viewing angles and outdoor visibility. You will notice the display the moment you switch on the device. Another plus here is the support of Widevine L1, which simply means that you can enjoy HD content on Netflix and Amazon Prime Videos. We tried watching a few series on this device and was impressed with the display quality used by Samsung. However, when you compare it AMOLED display used in other Samsung devices, then surely you will miss that detailed deep blacks. 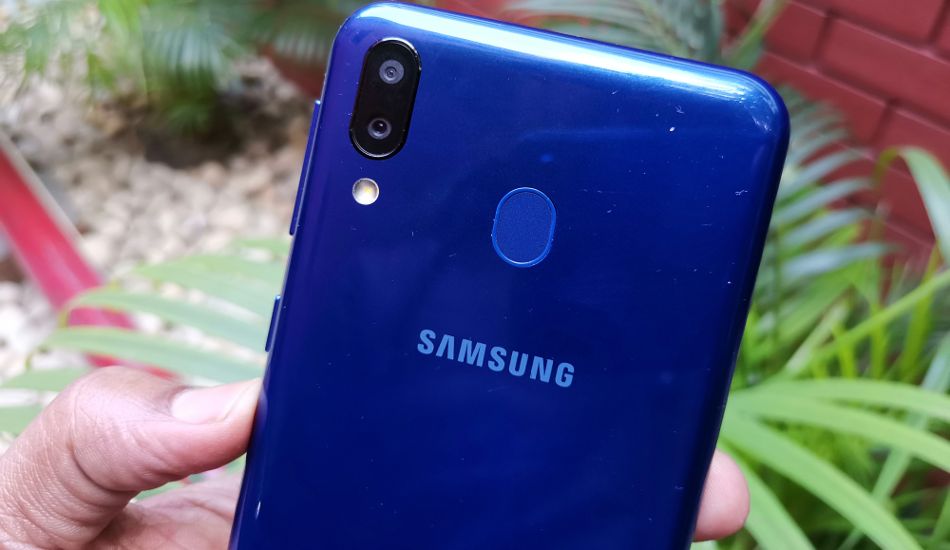 Samsung Galaxy M20 features a dual-camera setup, which comes with a combination of a 13-megapixel primary sensor with f/1.9 aperture and a 5-megapixel ultra-wide sensor. For the front, the company has employed an 8-megapixel shooter with f/2.0 aperture. Unlike other companies, which majorly uses a secondary camera for depth sensing, Samsung has given you ultra-wide lens, which is a rarity in this price band. With this, you can now actually use both the lens present in this smartphone to capture images.

Coming to the camera UI first, the user interface is quite simple and minimalistic. You get an option to choose between normal mode and wide-angle mode just above the shutter button. One can also just swipe up or down to switch to the selfie camera. The camera UI has different modes like Beauty, Live Focus, Auto, Stickers and Continous Shot. That said, the camera performance is not that great when compared to other phones.

The Galaxy M20 is able to take some good shots in broad daylight, though it sometimes oversaturates the colours. The wide-angle lens does a decent job in capturing a wider area, though it is prone to the barrel distortion. Barrel distortion is a common problem with the wide-angle lens used in smartphones. However, the company has given an option to fix this issue in the gallery application. That said, we still feel that the camera could have been better as the detailing is not at par with the phones like Nokia 6.1 Plus or Zenfone Max Pro M2. 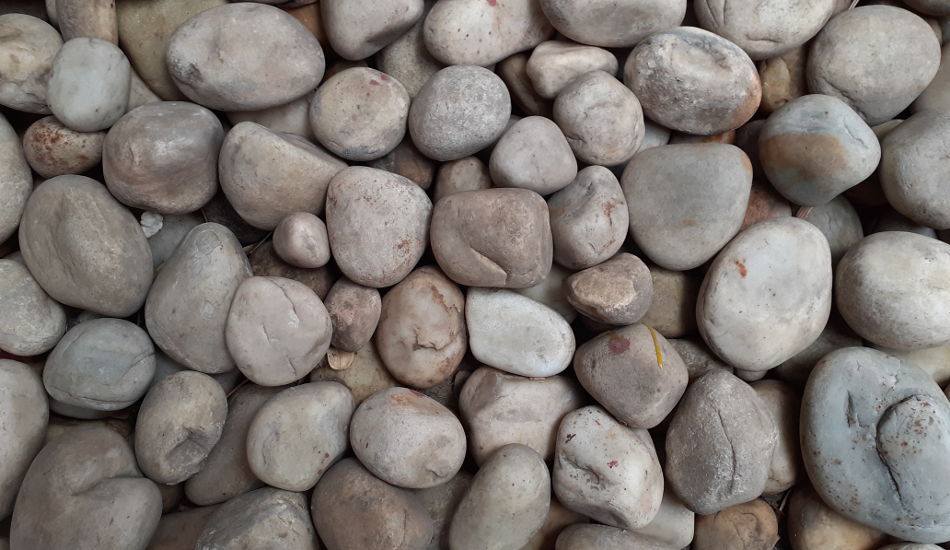 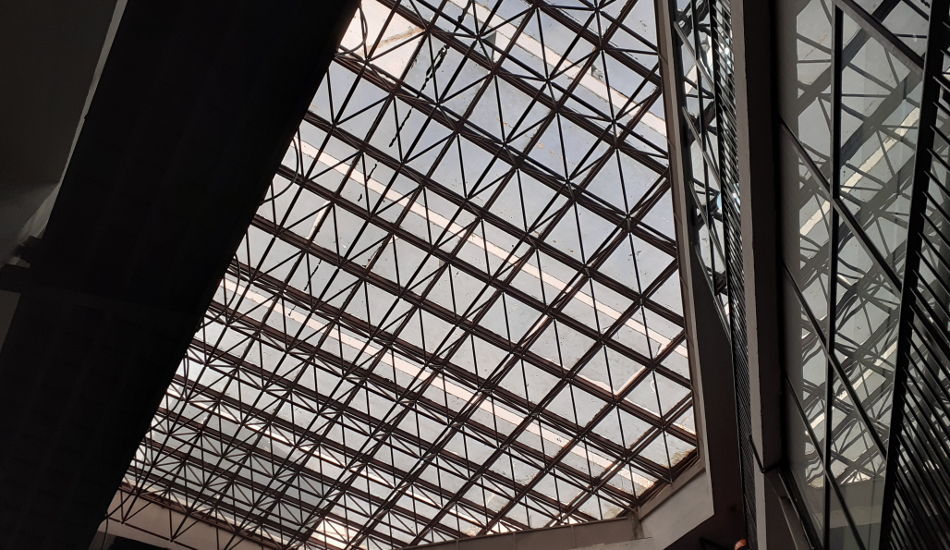 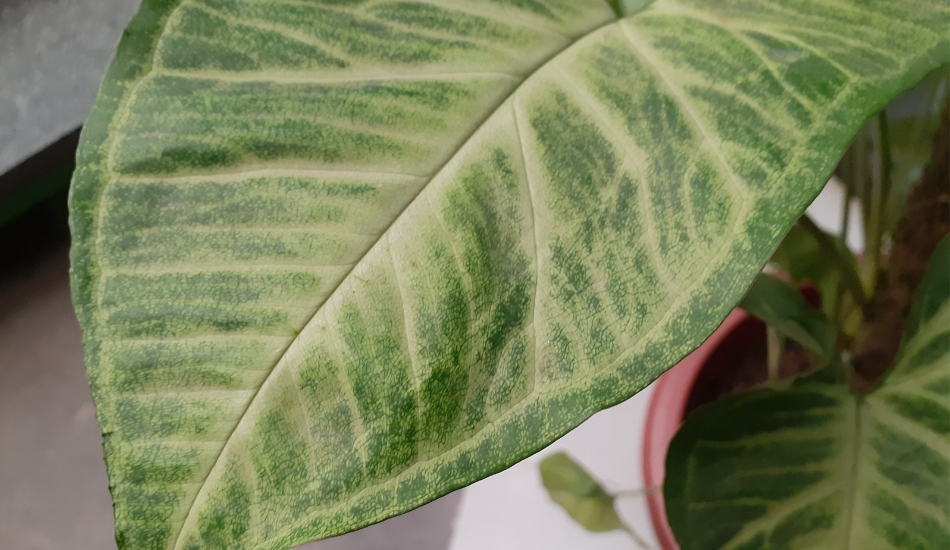 In low light conditions, the photos came out to quite average in our opinion as the noises and graininess were quite visible. The front camera does a decent job in capturing selfies when the lights are good, though the quality is reduced drastically. The Live Focus feature works perfectly fine and the phone is able to highlight the subjects properly.

Talking about performance, the Samsung Galaxy M20 is the first smartphone from the company to feature the latest Exynos 7904 octa-core processor. The phone is available in two memory configurations, 3GB + 32GB and 4GB + 64GB. We got the latter version for review. The phone is able to handle most of the daily tasks like using WhatsApp, Facebook, replying to emails and more without any hassle and multi-tasking is decent, though you will feel a slight sluggishness when you open more than 10 apps in the background and then multitask. 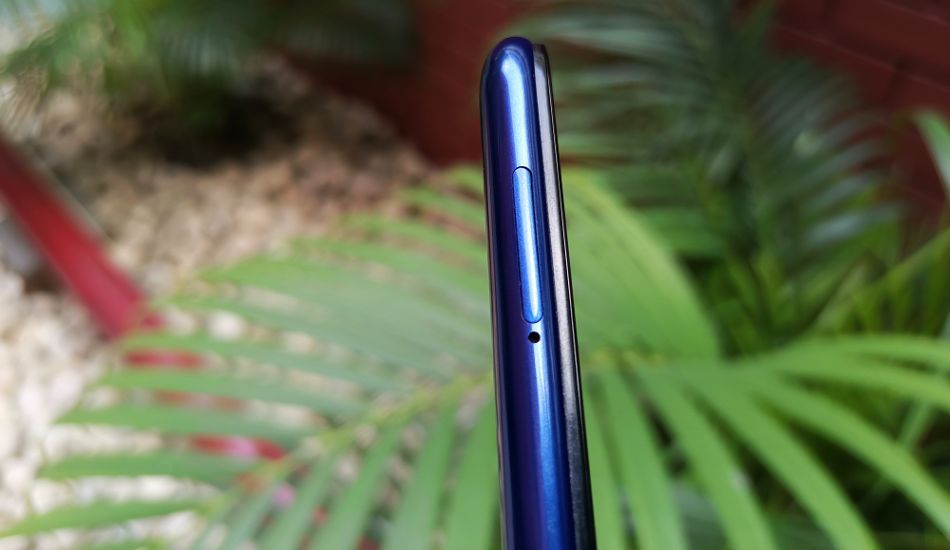 On day-to-day front, the chipset a comparable performance to the Snapdragon 636 chipset. However, it lags a bit in the gaming department. Playing PUBG Mobile in medium setting, we found out that the phone was not able to handle it properly as we noticed some lags and frame drops during the gameplay. It is safe to say that the phone is meant for casual gaming.

Coming to the software front, the Galaxy M20 runs on Samsung Experience UX 9.5, which is still based on Android 8.1 Oreo. It is a sad thing to see that in 2019, the phone still runs a dated operating system. However, the Experience 9.5 UX offers highly customizable options. You have an option to choose different icons packs, change icon size and grids. 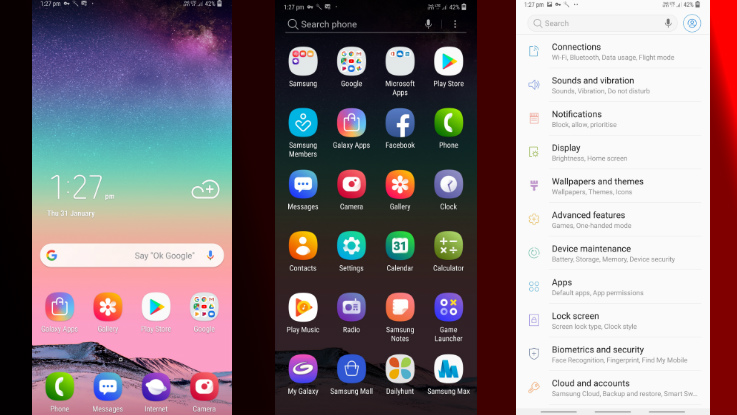 The app drawer can be opened with a simple swipe-up, which is pretty smooth and animations are pleasing to the eyes. However, in near future, when the phone’s memory is full, you will notice lags. That time the only option you have is to tone down animation scale in Developer Options. There are some good apps like Game Launcher and Samsung Max. The latter helps in saving mobile data and gives privacy protection.

That said, what we didn’t like about the UI was the fact that it comes with lots of bloatware. You get third-party apps like Dailyhunt, Facebook, Microsoft app suites and Google apps. Then there is Samsung’s own app suite. While most of the apps can be deleted, but you cannot uninstall Microsoft apps and Facebook. All you can do is disable them. 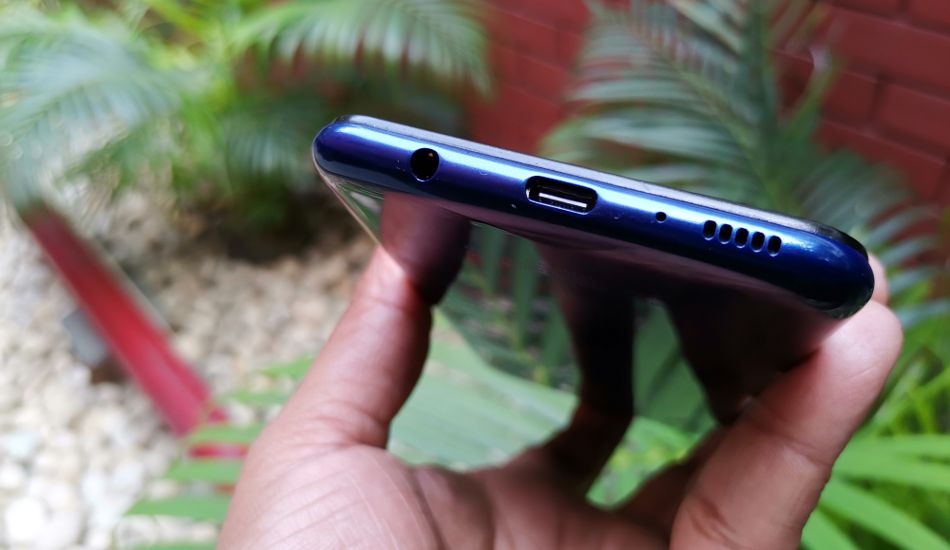 Coming to battery life, the Samsung Galaxy M20 features an impressive 5000mAh juice. In our testing, we found out that the phone was able to last almost 2 days under normal usage. We tested the battery capability by turning on the navigation for almost 3 hours and playing music simultaneously. The result was pretty good as the phone was able to last one whole day with some battery juice left in it.

Another positive point here is the inclusion of USB Type-C port and 15W fast charger. With this, the phone gets full charged up faster as compared to the rest of the competition in this price band. You can get from 30 per cent to 80 per cent in less than 60 minutes, which is a good thing. The Exynos 7904 balanced performance also helps in delivering better battery life.

With the Galaxy M20, Samsung has finally offered an interesting proposition for its loyal fanbase. The phone is loaded with a standard design, though the display is quite interesting. The performance as a daily driver is good, though it is not meant for some serious gaming. The phone offers smooth and highly-customisable user interface, though it is still loaded with bloatware. Camera performance is a mixed bag and hopefully, a software update can improve it. The battery life is really impressive, in our testing. Overall, if you are Samsung fanboy, who was earlier disappointed with the company’s product lineup, the Galaxy M20 might excite you.