This is one of the most innovative and powerful handsets in the market.

Same as for many other people, Samsung’s Galaxy Note 2 had impressed us a lot. So when the Korean handset giant came out with Note 3 a few months back we expected nothing less. 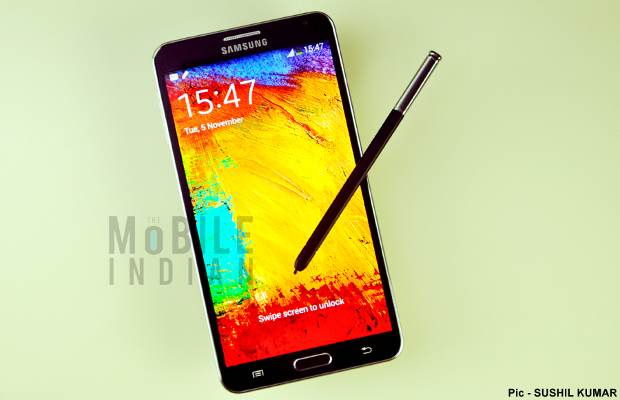 Note 3 from the very start generated a lot of hope with its features, which included a huge 5.7 inch display, octa core processor, 3 GB RAM, 32 GB internal storage etc. In fact, it had the best features among all flagship products of MNC players, barring a few features like Lumia 1020’s 41 megapixel camera or the metallic body of HTC One and iPhone 5. 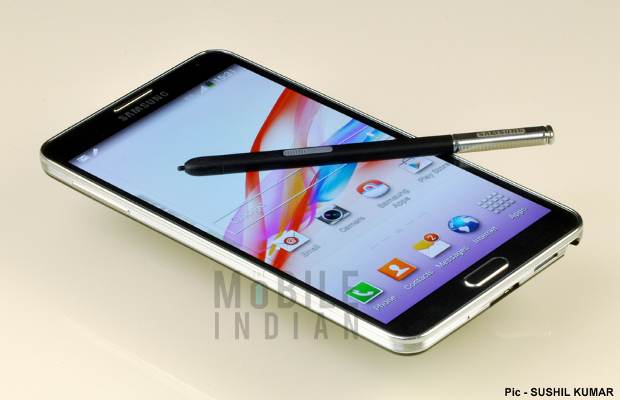 As its features suggest as well, it is priced very steeply; these days for around Rs 47,000. So is it worth that much, considering it has opponents like Apple iPhone 5s, HTC One and Nokia Lumia 1020? 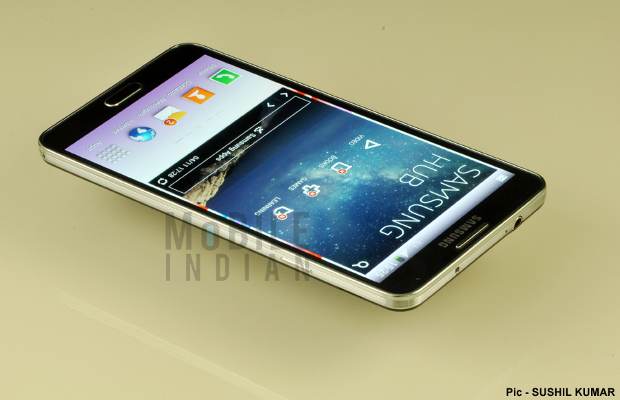 We had the opportunity to use Samsung Galaxy Note 3 for quite some time, during which we tried to inspect it from all possible angles and here is a brief account of what we found.

In a premium smartphone not only do the insides, but the appearance matters a lot as well. Samsung Galaxy Note 3, though, entices a lot as a product; while its looks are loathsome. 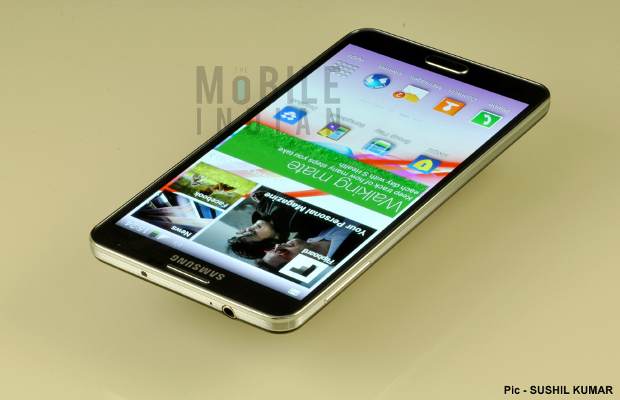 It’s not that Samsung has not worked on looks, but just that beauty lies in the eyes of the beholder. Note 3 is in fact very different from all other Samsung devices. Instead of a shiny, slippery plastic back panel – a blot associated with most Samsung smartphones – the Note 3 has used a faux leather rear panel 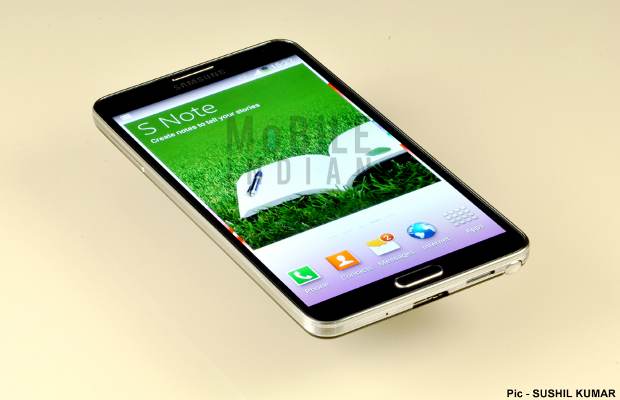 The rear panel not only looks regal but also has a good grip. 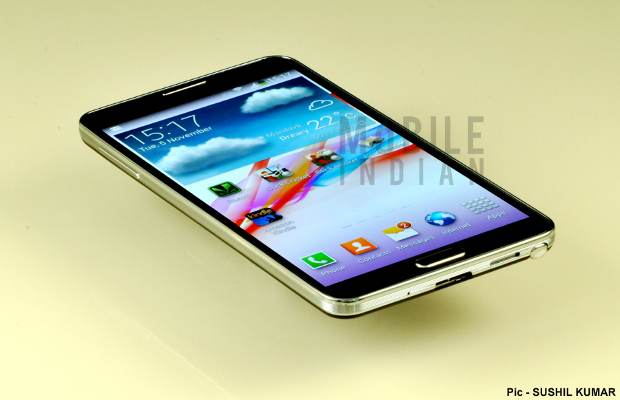 Like Note 2, it comes with an S Pen stylus and a groove for holding it. The sides of Note 3 are barricaded with metal strip for extra protection and enhanced looks. 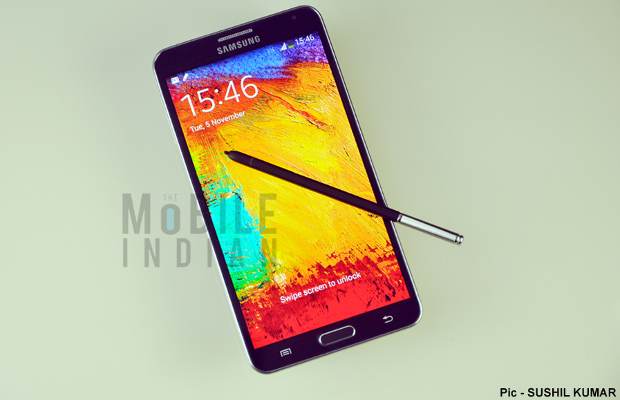 But all these good things do not make it as gorgeous as the HTC One or iPhone 5s. Perhaps, Samsung has avoided a metal panel for fear of increasing its weight (it weighs only 168 grams) or of making it slippery, which would have been devastating as a slippery 5.7 inch smartphone would be virtually impossible to use. Also, a metal panel would have forced Samsung to use a non-removable back panel in Note 3, which has the disadvantages we have seen in many devices. In a nutshell, I would like to say that the Note 3’s design is made keeping utility in mind, and not looks.

Note 3 with its 5.7 inch display is among the few devices of its size in the market. The huge display makes it almost like a tablet where you could do a lot of work effortlessly. But it is not size that makes it so good. The display has full HD resolution with an astonishing 480 ppi pixel density. The sharpness, colour output, viewing angle, and even brightness are top notch.

This is of course the USP of the phone. First of all, Note 3 comes with an octa core processor which is assisted by a huge 3 GB RAM. And it has Android 4.3 Jelly Bean. It would be foolish to think the device won’t perform while gaming and multi-tasking.

Yet it is not muscle that makes it so special but the user interface that impressed us the most. TouchWiz user interface in Note 3 brings the old goodies like Multi Window. There is a magazine-like home screen; just a quick tap on the home button brings up the page where you can see your phone’s content, updates from social networks, and news apps like Flipboard all arranged in a nice magazine like format – something like in HTC’s Blinkfeed UI. 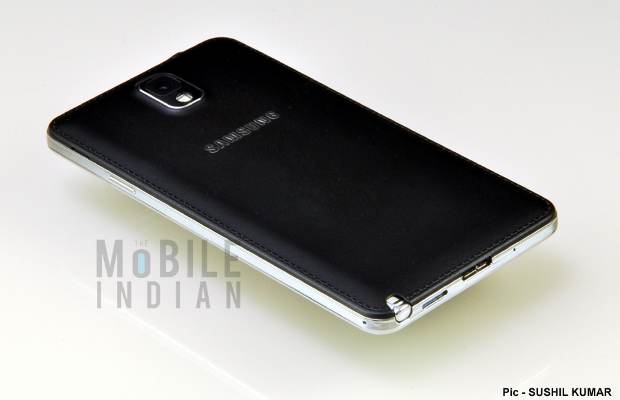 There is an Easy Mode as well, which brings up important apps in big fonts to the home page (there is no app page though). This mode has been designed for first time smartphone users. 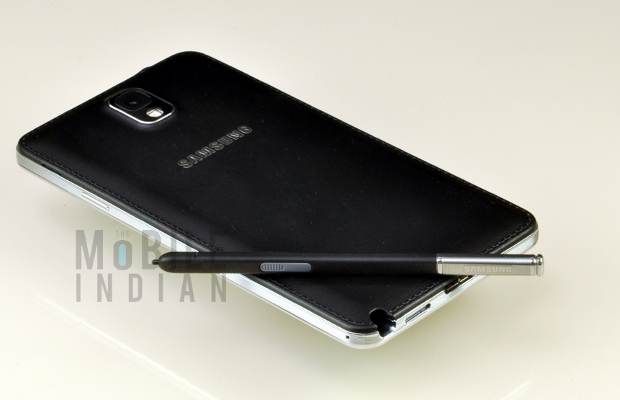 Note 3 comes with the very useful S Pen. The moment you take out the S Pen, a notification comes up at the top telling you that that’s what you did. You can switch off this feature to save battery. The S Pen in Note 3 comes with Air Command – action memo, scrap booker, screen writer, S finder, and pen window. Action memo allows you to quickly open the memo page to note down something while the scrap booker lets you capture a page and write anything on that. Another great utility of the S Pen is its handwriting option; just use the S Pen to write on an entry area in your natural style; no need to use the onscreen keyboard. 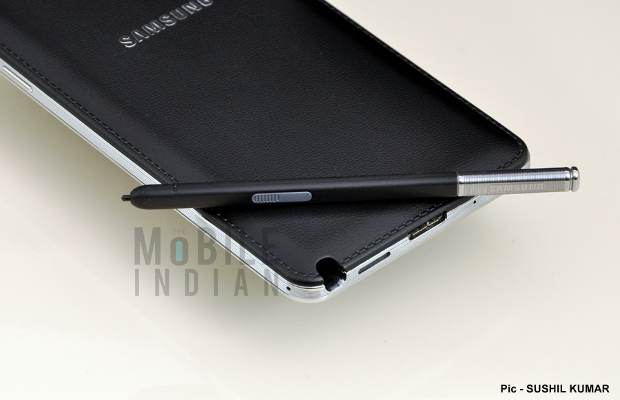 There are features like smart stay, smart rotation, smart pause, and smart scroll as well, all of which work fine and make it truly a smart-phone.

The Samsung Galaxy Note 3 comes with a 13 megapixel rear camera and a 2 megapixel front camera. There is an LED flash in the rear panel to help the primary camera. The rear camera is able to capture full HD resolution videos at 30 frames per second. 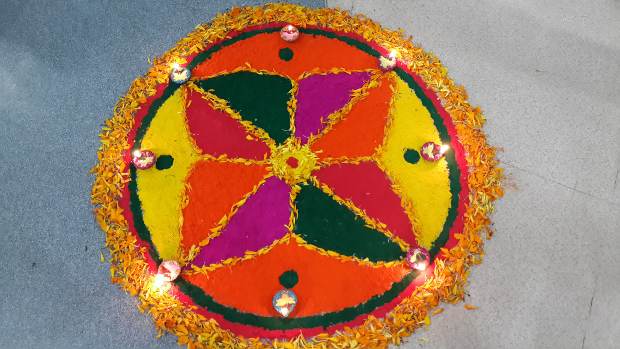 The camera application is quite fast; it takes a fraction of a second to process an image. The app is also quite simple. On the right side the video and image capture buttons are located alongside the modes menu, which has auto, beauty face, panorama, best photo, animated photo and many other options. 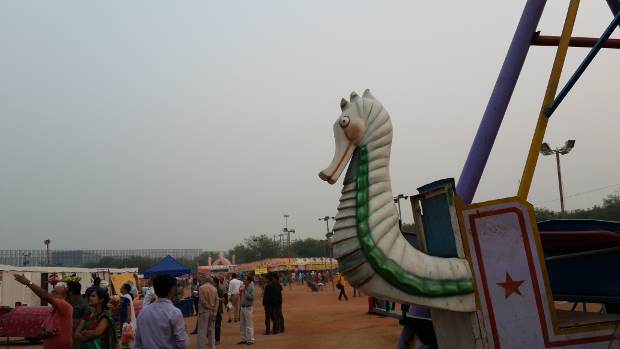 At the bottom you can see the effects applied while switch camera and dual capture options are displayed at the settings on top. 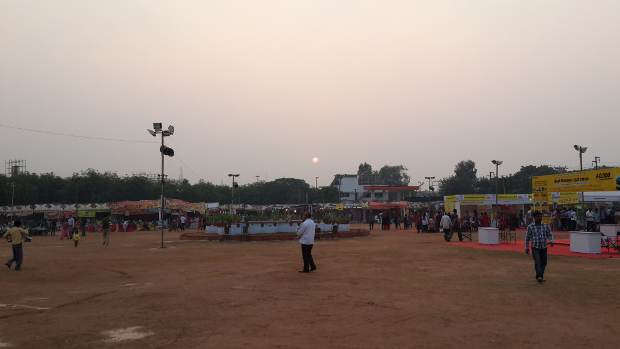 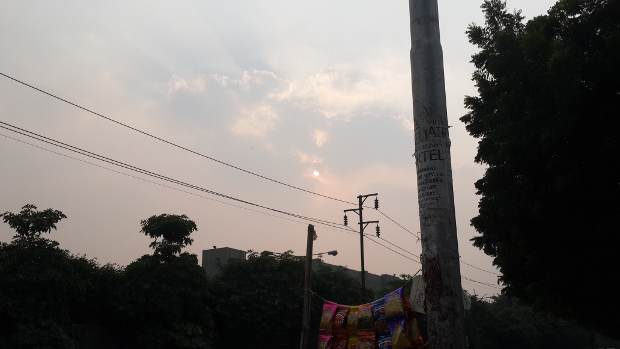 A very good feature of Note 3 is its dual capture mode. In this, you could use both the rear and front cameras to capture images and videos. For instance, while the rear camera captures scenery, the front camera can click your picture and place it inside the main image. You can shoot videos in normal or slow motion or in fast pace.

Note 3 has a 3200 mAh Li-Ion removable battery. Though it looks a bit small in view of its huge display it does a good job thanks to the Samsung Exynos 5 processor, which combines a 1.9 GHz A15 core and a 1.3 GHz A7 core and is meant to save power. On average use involving a few minutes of calls, gaming, music and web browsing, the phone easily lasts for a days’ time. However, it has a proprietary charging port, which means that you cannot charge it with any other charger; you have to keep its charging cable with you all the time. 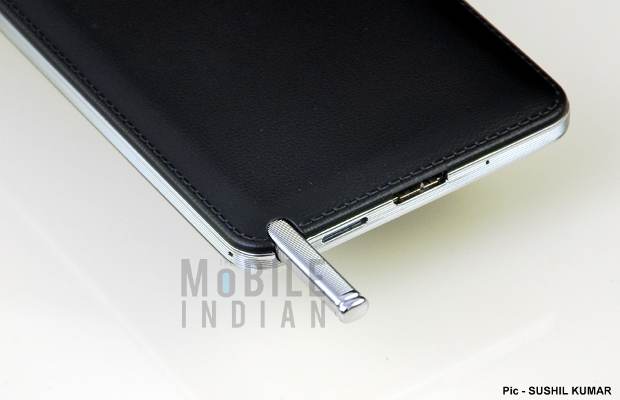 Note 3 has a huge 32 GB internal storage and 64 GB micro SD card slot. Besides, it has a massive 3 GB RAM. This again makes it the best smartphone under Rs 50,000 in terms of memory. 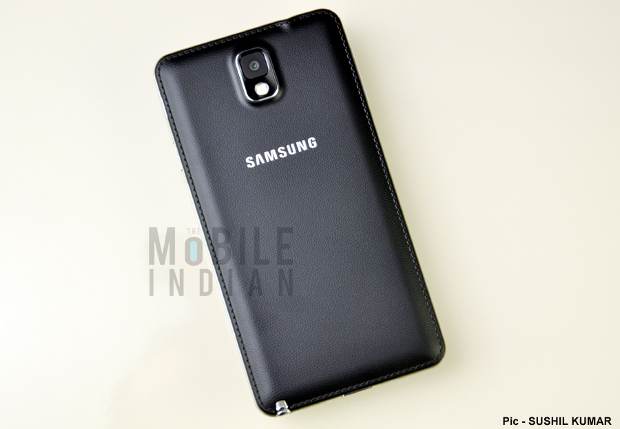 The octa core version of Note 3 is sadly a non-LTE device (its quad core version is not compatible with India’s TDD LTE version either). Otherwise, Samsung Galaxy Note 3 is quite rich in terms of connectivity with its WiFi (b/g/n), Bluetooth, NFC, MHL (HDMI) and micro USB. It has GPS and Glonass support for navigation. 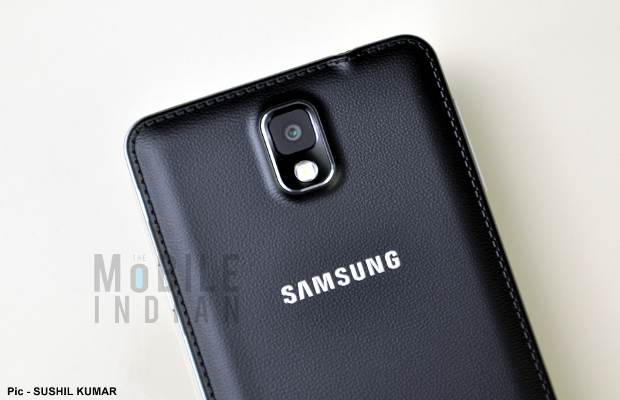 Note 3 has all the sensors that you could think a phone would have including Gesture, Accelerometer, Geo-magnetic, Gyroscope, RGB, Proximity, Barometer, Temperature & Humidity, and Hall Sensor.

The Galaxy Note 3 has everything that even an advance user would like to see in his/her smartphone. The noticeable absentees are support for TDD LTE and a universal charging port. But in any case no smartphone currently supports the TDD LTE version of 4G so Note 3 cannot be singled out about this. It would have been nice if the device was water and dust proof but in that case it would need a non-removable battery, and that would complicate matters. So in a nutshell, the Galaxy Note 3 is a well balanced and well made smartphone with features that make it truly a smartphone. Its design is entirely a different matter and you are the only one to decide whether it is good or not.