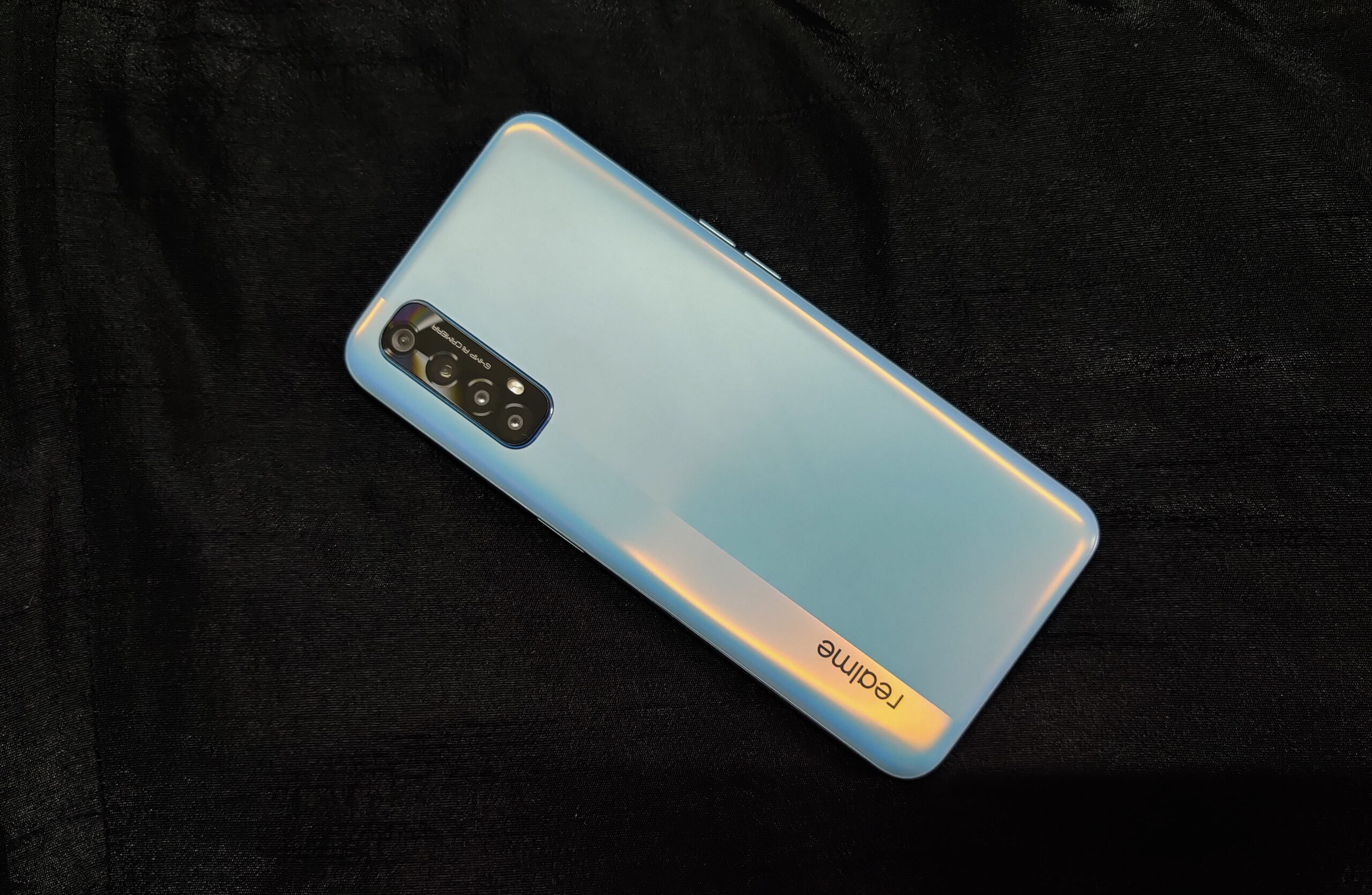 Here we review the RealMe 7, the new budget device by RealMe. Take a look at our thoughts about how the device performs in real life. 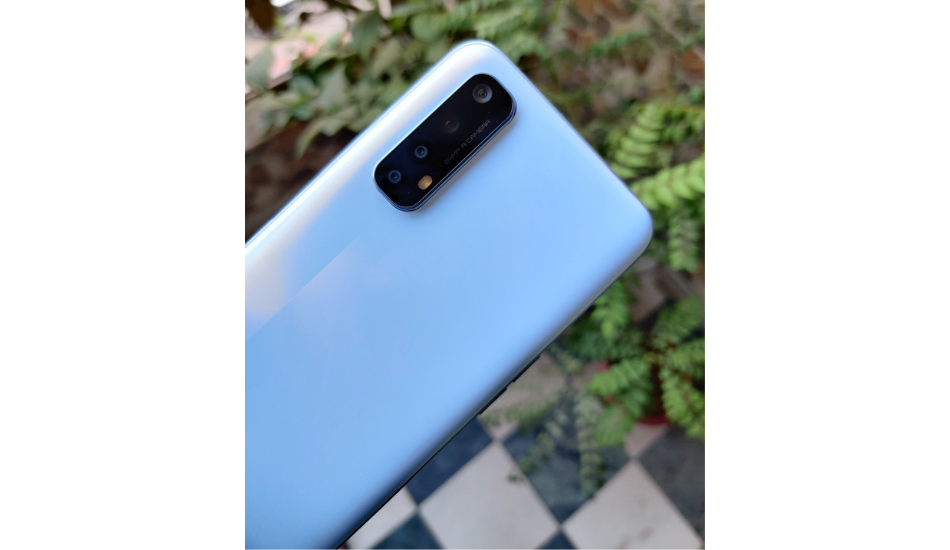 The design of the RealMe 7 is not very striking but is simple and sleek. On the front, we have a 6.5-inch 90Hz Full HD+ LCD display with a resolution of 1080×2040, which we’ll talk about in a sec. On the top left corner, we have an in-display front camera, on the left we have the volume buttons and on the right we have the power button that also doubles as a fingerprint scanner. The buttons felt good, tactile and clicky. 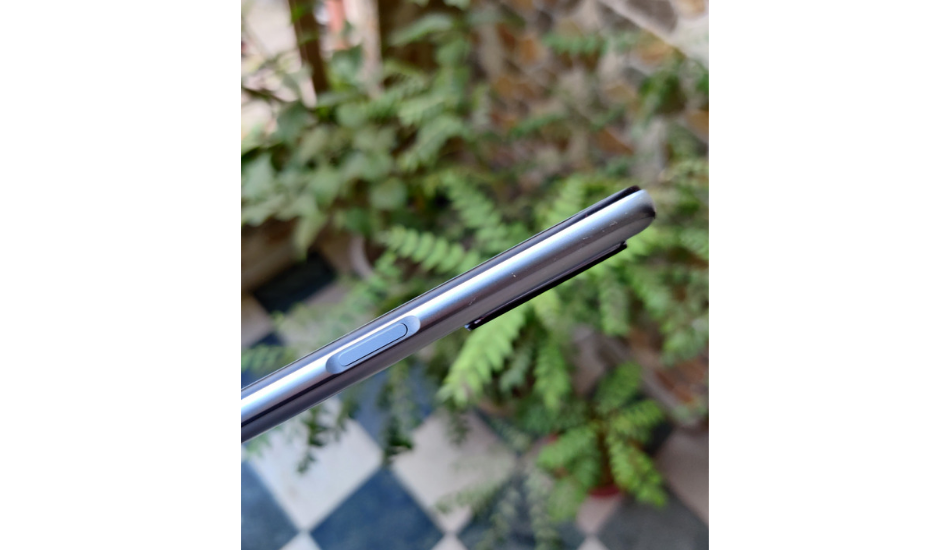 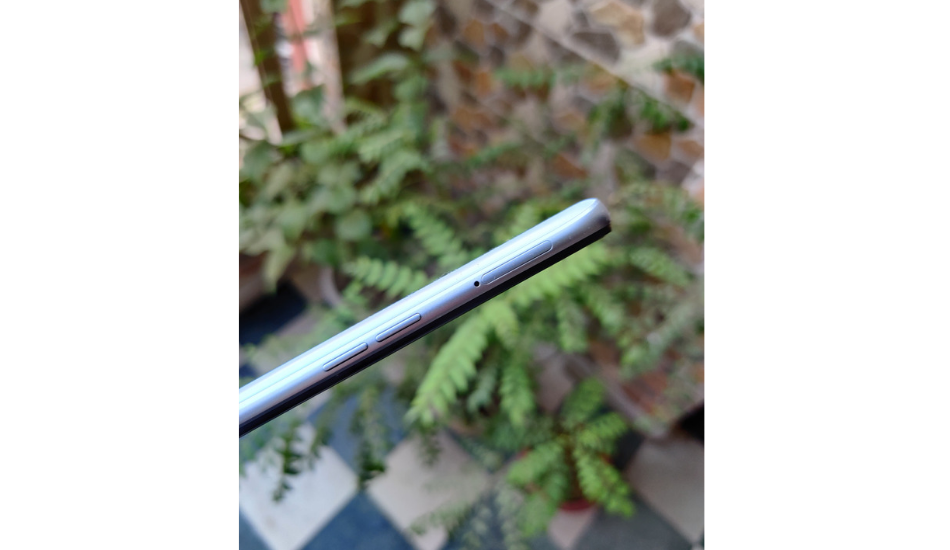 When you hold the device, you do get the premium feel, but as the device is a bit on the thicker side, it also feels a bit heavy and bulky. On the bottom, we have a mic, a 3.5mm headphone jack, Type-C port for charging, and a single mono speaker that to be honest doesn’t sound good. It is loud enough, but sounds too muffled. 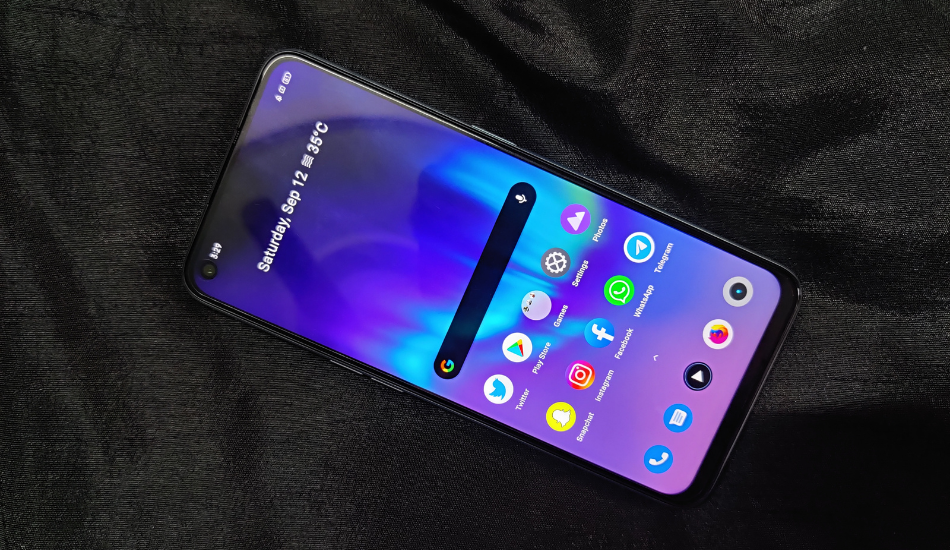 Talking about the display, this is not the best you can get in a smartphone. The viewing angles are okay, the text looked sharp, but the colors don’t look too good. As it’s a LCD display, the blacks are not really deep blacks and we could see the backlight at the edges of the screen. The colors did tend to fade no matter what setting I chose for display. The viewing angles were okay. Talking about the brightness, it isn’t too bright and because of this, outdoor readability does get affected even at maximum brightness. Even indoors, I had to keep the brightness more than 50% because anything below that looked very low to me.

The only good I see in this display is the 90Hz refresh rate. The refresh rate plays an important role in the experience and the device didn’t disappoint in that aspect.

The RealMe 7 is powered by the MediaTek Helio G95 and the unit we got had 8GB of RAM and 128GB of Storage. The storage is also expandable and there’s a 3 card slot where you can put in 2 SIM cards and a Micro SD card. 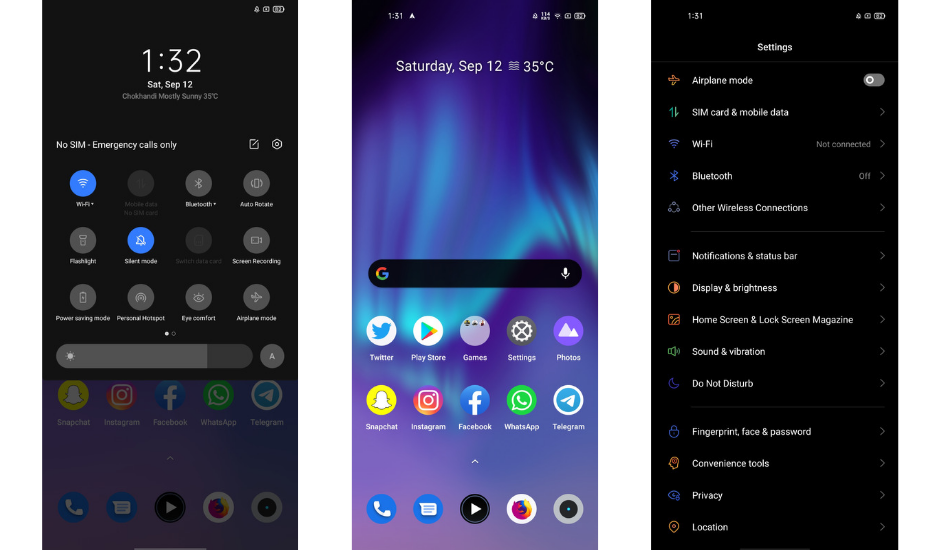 The device runs on RealMe UI 1.0 which is based on Android 10. Some bloat is included out of the box, like a browser app, WPS office, etc. The performance for the most part was good, the app launches were quick, the RAM management was great, but I did notice some issues in the UI until I received an update. First, while using gesture navigation where we have to swipe from the right or left side to go back, the device couldn’t identify my swipe and hence, I had to swipe 3-4 times to go back a screen. Secondly, even though I had set the refresh rate to 90Hz (and not auto adjust), I could see the device performing in 60Hz even while using the stock launcher and scrolling through the UI. Thirdly, there are minor lags and choppiness in animations throughout the UI, for example, right after unlocking the device if I opened WhatsApp or some other app, I could see the device struggle with the animation of opening the app. This got solved on its own just after a few minutes.

These were some issues that could be easily fixed with a software update which RealMe did quite quickly. I did receive a software update which solved almost all these issues. The lag was almost negligible after the update and navigation gesture issue was also solved. The performance was super smooth after the update. RealMe UI is totally feature packed as it is heavily inspired by ColorOS. Gestures like Raise to wake, off-screen Gestures, flip to mute call, etc are all present. Face Unlock is also present which works smoothly. The Fingerprint scanner which is present on the right side of the phone, was super fast in recognizing my finger. The moment I touch the scanner, the phone unlocks and there isn’t even a second of a delay.

Coming to the Gaming performance, I was able to play Call Of Duty: Mobile and Asphalt 9 both on the highest graphics available and couldn’t notice any major frame drops or lags. The new gaming processor from Mediatek was easily able to handle these games without any issues. One thing I would like to point out is that the phone’s temperature did go to a hotter side while gaming. The ROM also features Game Space which improves performance by giving CPU priority to games and also uses Dual-Channel network acceleration for less latency issues.

RealMe 7 is backed by a 5000mAh battery which supports 30W Dart fast Charging. This battery gave me 6.5 hours of screen-on time with 17.5 hours of total usage. Out of these 17.5 hours, the phone was on stand-by for 7 hours in which the battery did drop by 3-4%. It also included 25-35 minutes of gaming in which I played Asphalt 9 and Call Of Duty Mobile at high graphics. 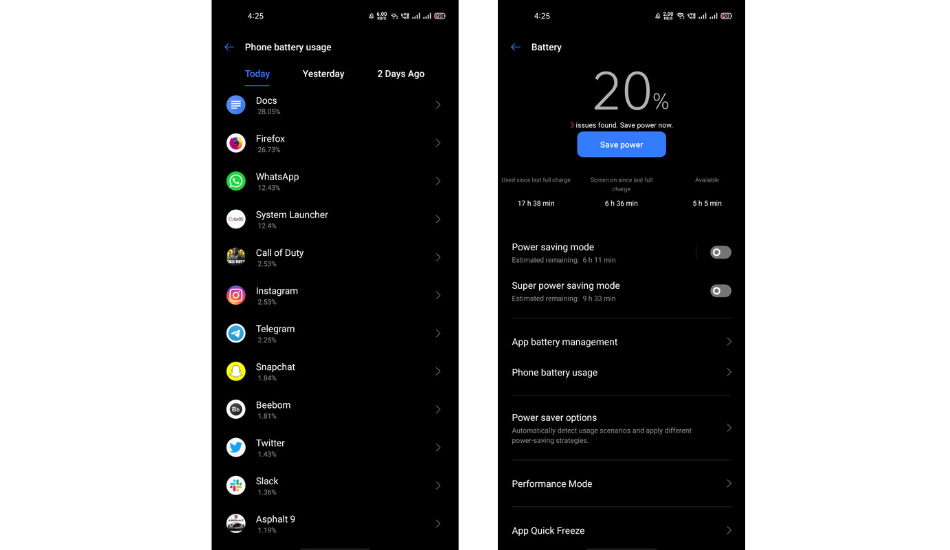 Without gaming, I could easily get more than 7 hours of screen-on time which is insanely good.

When I put it on charge, the phone went from 20% to 100% in about 56 minutes which is also pretty good considering its a 5000mAh battery. Also, the phone tends to get warm while charging.

Overall, the RealMe 7 just excels in the battery department with fast charging and great battery backup.

The RealMe 7 has a quad-camera setup at the rear. It has a 64MP Sony IMX682 Primary sensor with f/1.8 aperture, an 8MP Ultra Wide-Angle lens with a 119-degree field of view and f/2.3 aperture, a 2MP Black & White Portrait lens and a 2MP Macro Camera for those close-up shots.

The camera performed well both in low-light and in outdoor conditions. I did receive the OTA update after which the performance did improve. The colours looked over-saturated before the OTA but it was improved afterwards. The pictures were a bit over-sharpened in my opinion. The 64MP Pro Mode which was added in the update performed well too. The colors in the picture clicked with the main camera looked great and vivid. The portrait photos were clean and edge detection was good. When switched to the wide angle camera, the picture came out to be soft but the colours were maintained. 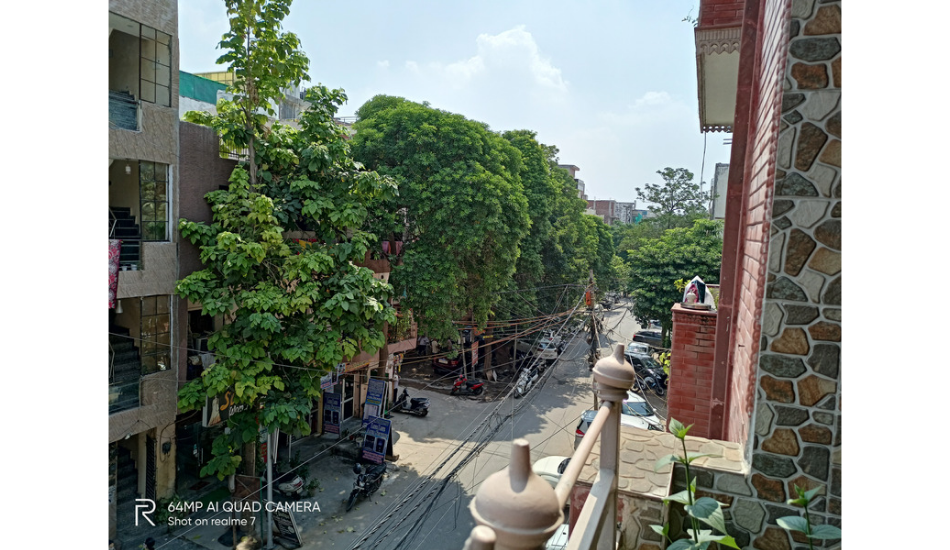 While capturing photos in artificial lighting, the cameras did a good job and the pictures looked surprisingly sharp and colours were retained. 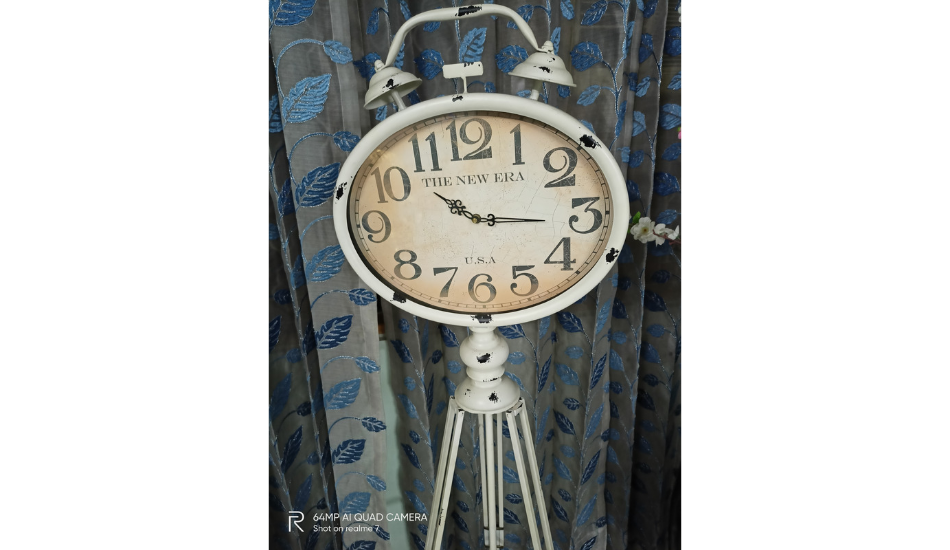 The night mode shots were okay, the details were good but the picture did look soft. Macro shots were great with amazing edge detection.

Coming to the front camera, selfies in daylight were great. Colours came out to be natural and the photo looked great overall. In artificial lighting or low lighting, you will be needing a bit of light to click a usable selfie, as in low-lighting the front camera does struggle a bit.

Overall, the cameras on the back perform really good both in artificial lighting and daylight conditions. Selfies were also great and the new Sony sensor on the rear does make a difference.

The RealMe 7 won't disappoint you while gaming at high graphics. The only aspect in which the phone lacked was punchy display. Even though it is a 90Hz display, the experience of using it does get hampered because of the colours and low brightness. Other than that, the phone is bang for the buck at a price of Rs 14,999 for 6GB/64GB variant and Rs 16,999 for 8GB/128GB variant.