Following the launch of the Gionee Dream D1, Gionee has launched the Gionee Elife E3 smartphone for the Indian Market.

The Elife E3 is the new flagship Android based smartphone from Gionee and has a sleek body along with the latest processor and Android operating system. While the device looks good in terms of specification, let’s find out how does Gionee Elife E3 perform in the real life scenario.

The Gionee Elife E3 is quite slim as compared to be its predecessor Dream D1. It is 7.9 mm thick and weight around 110 grams. 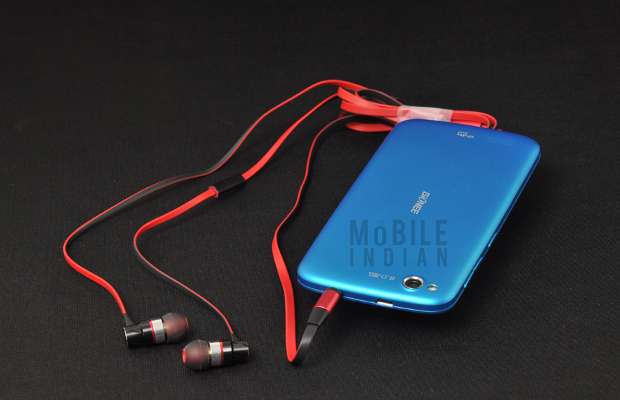 The device has a clean flush finish with the absence of hardware keys on the front of the device. The Gionee Elife E3 has got capacitive touch sensitive keys. The back panel of the device features a glossy finish but the color options will make sure that minor scratches get ignored very easily. The sideways placement of the power/standby key makes it easy to use.

The overall build quality of the device is good, it’s sturdy and the bundled snap on covers add a lot of additional protection as well.

The Gionee Elife E3 has s a 4.7 inch True HD, 720p display built using the IPS (In Plans Switching) technology. The display works great and has great contrast as well as color vibrancy as well. 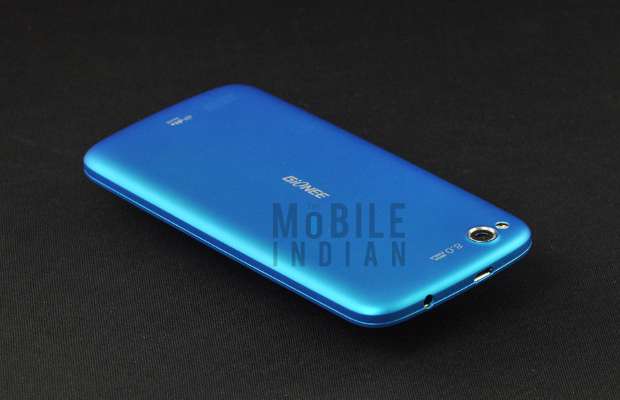 The native resolution supported by the device is 1280 x 720 pixels at 4.7 inches making it great for viewing HD movies as well as playing HD games. The display has a higher pixel density that makes visuals look great with no pixilation visible at all.

Performance wise the Gionee Elife E3 is your perfect everyday companion. The Gionee Elife E3 utilises a Mediatek MT6589 chipset that includes a 1.2GHz quad core processor along with an Ultra low power PowerVR SGX 544MP graphic processor. The hardware is the same as the older Gionee Dream D1 but again the optimisation has been done nicely which makes application even like the graphic intensive Real Racing 3 work freely on the device. 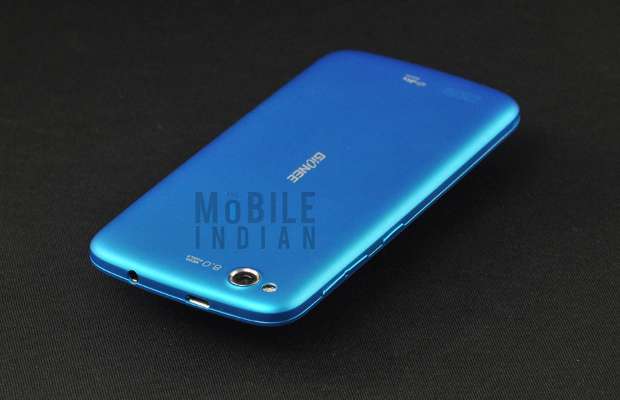 Within few minutes of [laying graphic intensive game one can feel the smartphone heating up. But the performance level stays intact and even after playing games like blood and glory for 2 hours the device performed as before.

The Gionee Elife E3 features a 1GB of RAM memory and 16GB of internal storage which can be furteh expanded up to 32 GB using a SD micro card.

In terms of multitasking there is ample headroom for applications with 1 GB RAM and a quad core processor.

The device makes use of a custom interface which is Gionee’s own developed user interface and is very easy to use as well. The home screens can be added and reduced in number to accommodate more stuff. Even the lock screens get a multi windows interface that offers quick access to apps and utilities. 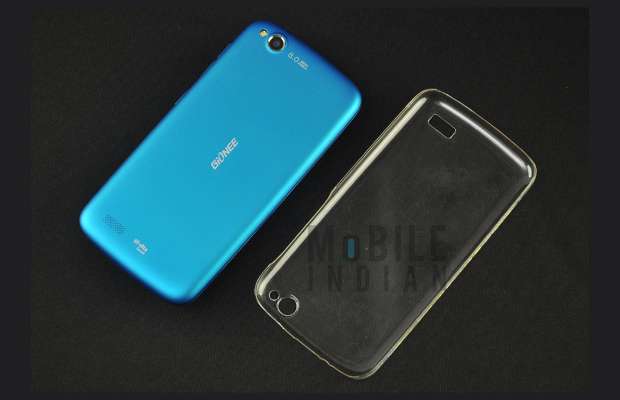 In terms of compatibility, most applications work easily and flawlessly on the smartphone.

The overall experience of the device is good and in future the company will roll out upgrades as and when they are ready for the device making it better.

During the course of the review the device underwent a lot of application testing and stressing but the device never hung or froze. The hardware and the 1GB RAM combo really makes a huge difference plus the 16 GB of internal storage really comes in handy while installing applications and even the heavy 2GB+ games like Real racing 3.

The 4.7 inch display is a major plus point of this device even the touch sensitivity of the device is very accurate and all the gestures are very accurately registered and translated by the device. 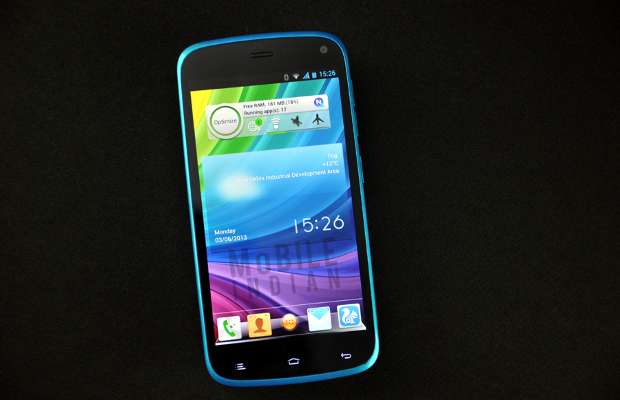 In terms of performance benchmarking using the Antutu benchmark the Gionee Elife E3 offered 13247 marks putting it above the Google Nexus 7 which is a quad core device as well and the Samsung galaxy Note N7000. While in comparison with the Micromax Canvas HD that has almost similar hardware specifications the Gionee Elife E3 has marginal but a certain edge as it offers better overall scores but with a smaller display at same resolution.

The call performance of this device is also another major plus point for the device. The calls are received and made without any issue. The earpiece and loudspeaker volume is abundant and the microphone also makes sure the receiver gets to hear every world loud and clear. The loudspeaker here needs a special mention as in a slim device the loudspakers generally go faint but not on the Gionee Elife E3.

Gionee Elife E3 comes with an 8 megapixel camera at the back. It might be a smaller number as compared to the 13 and 15 megapixel sensors coming in but its output is good. The camera features a zero lag shutter and a BIS (Backside illuminated sensor). The BIS Sensor really bumps up the colors and information detail in low light conditions. Overall the camera offers great variance in colors and Full HD 1080p video recording as well at 30 Frames/sec. 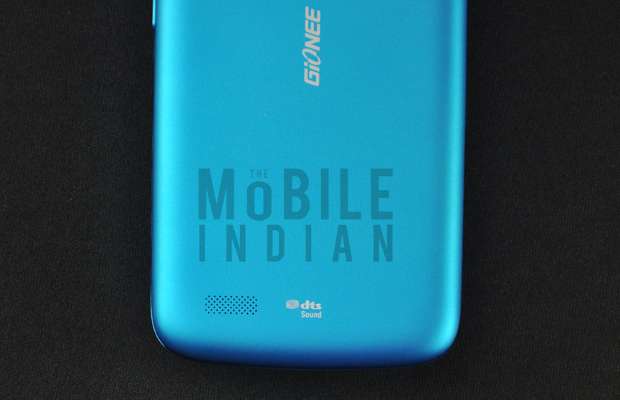 The image quality of the camera is good in both the outdoor and indoor modes provided. The LED flash comes in to play wherever needed but is only effective for very close objects. The front side camera is a 2 megapixel fixed focus one. The fixed focus in the rear camera limits the usage.

On multimedia front this device features support for all generic android formats plus like any other android device there’s a plethora of application available on android marketplace, which is now called the Google Play store to extend multimedia capabilities. There is also stereo FM in the smartphone which also supports high definition recording and automatic signal boost feature for low signal areas.

Battery backup is one of the major plus points for the Gionee Elife E3, the device lasts for 1-2 full days of usage between charges easily and even longer for light users. IF you play a lot of games and do net surfing regularly the battery lasts for 1-1.5 days while otherwise it can go up to 2 days if you are a light user.

The device manages power usage quite brilliantly and offers superior performance on demand as well. With a slim device this is one thing that most would not ask for but yes the Gionee Elife E3 also offers a great battery life too.

So finally the Gionee Elife E3 with the price of Rs 14,999 offers features and functionality in a sleek and slim profile. But again the only problem anyone would be facing would be related to the newness of the brand. 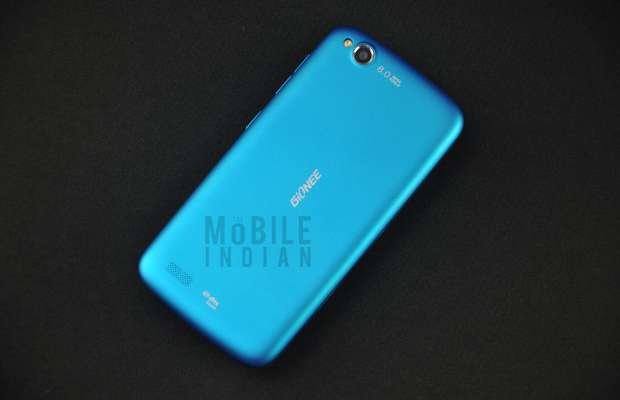