Though the phone is late by six months it still gets some latest hardware and operating system and comes at an amazing price. But how is it in real world usage? We find out.

Camera not so good No expandable memory No FM Radio

Two Google Nexus devices, made by Samsung, gave a miss to Indian market in the past. However the latest Nexus smartphone, made by LG, has arrived to India, though after a delay of six months. The phone in focus is the LG Nexus 4 which currently retailing in India for Rs 25,990.

What makes the phone super specially is the promise of latest Android version at all the time; if rumors are to be believed in next few weeks we will be seeing the latest version of Android – the Android 4.3 Jelly Bean as well. 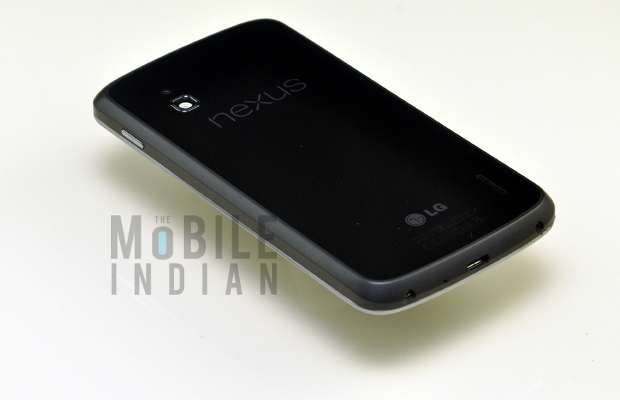 Moreover, the LG Nexus 4 has all the things that you can expect from a flagship device right now and that too at a very attractive price. Here is a detailed account of LG Nexus 4 which we have used quite extensively for more than a week.

LG has not been known for designing great looking phones even though it has been trying with the likes of its L-series. And while Nexus 4 too might not win many design awards for its looks, it certainly does have a very usable design. Its back panel is finished in glass with a pattern, and a big Nexus logo on it. The front gets a curved glass face, which is almost 90 per cent display with a very narrow bezel on the sides. The only drawback of this design is that you will need two screen guards, one at the back and the other in the front to protect the two glass panels from scratches (though Gorilla glass is used that claims to give protection from scratches). 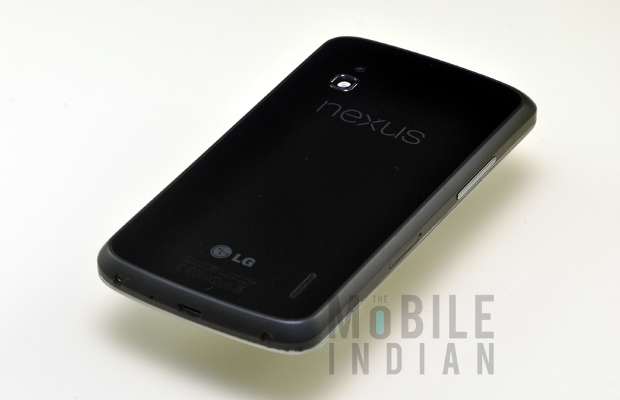 There is a chrome surround around the display and all these things are slippery, so LG has made the sides with a matte rubber type material, which allows a better grip on the device. The phone is on the smaller side with a slightly small 4.7 inch display (compared to the 5 inch phones popular these days). The phone is lightweight at just 139 grams. 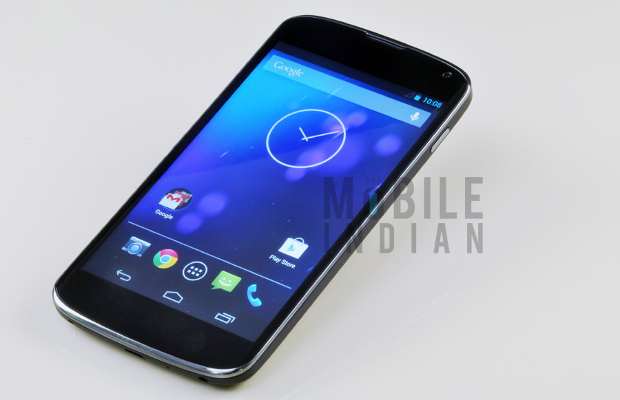 There is no capacitive touch button on the bottom bezel and all the three buttons are placed on the display itself. The USB port is at the bottom, volume rocker on the left side and power button on the top right. The top has a 3.5 mm jack and also a reset button since the battery is not removable. 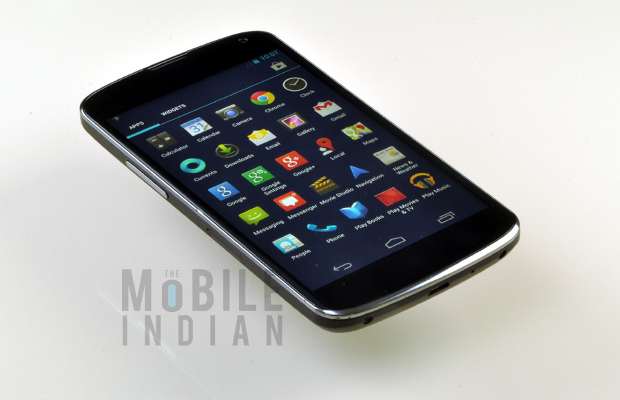 The camera at the back is almost invisible and is hidden inside the glass backside, similar to how front facing cameras appear in most phones. The LED display in fact is more prominently visible. There is a small speaker grill at the bottom portion of the back as well.

Nexus 4’s 4.7 inch HD (768 x 1280 pixel) display on the phone looks sharp and bright and has reasonably high pixel density of 320 ppi (pixel per inch). The colour reproduction is great; blacks are truly black as well. The curved glass on the display means that it cuts glare effectively and makes the display very usable in bright sunlight too. 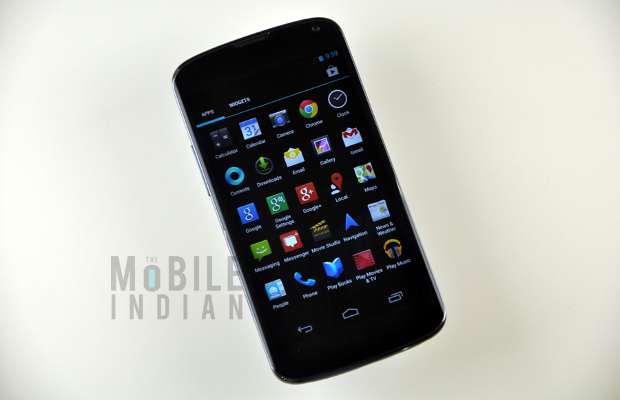 You also get Corning Gorilla Glass 2 for protection against scratch and falls. The touch response is top notch. While it might not be the best display it certainly is among the best in the industry. 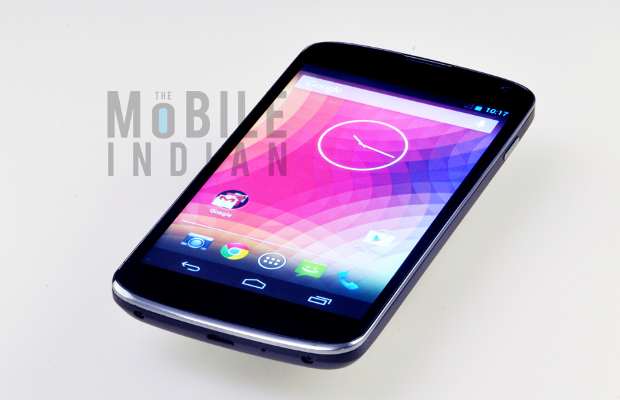 The phone offers top notch performance, we did not face any short of freezing or even framing while playing games or watching videos. There is no excessive heating either. 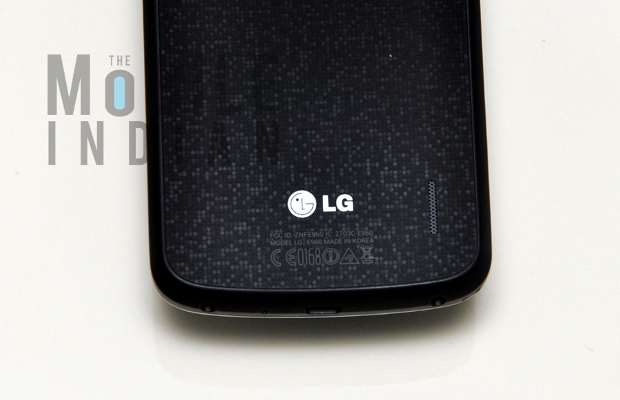 And though the phone is not the fastest out there with Galaxy S4 taking that spot, it is certainly amongst the best with the Antutu benchmark giving it a score of 15849. What aids its performance further is the fact that the Nexus 4 runs on stock Android and there is no extra user interface to slow it down.

The Nexus 4 has an 8 megapixel autofocus camera at the back with a single LED flash. The camera does quite a nice job outdoors where lighting is not an issue. The sharpness level is nice and pictures appear well balanced. However in terms of details the camera is not top notch even in bright conditions. 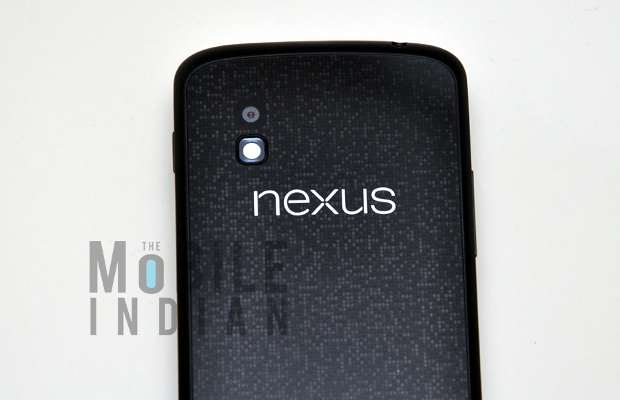 However indoors, even in decent light, pictures start getting grainy, though the graininess is at acceptable levels until you zoom in. The camera of LG Nexus 4 is thus not the best when you compare it to other flagship phones of others, but it is the best when you throw its pricing in the mix. There is also a front facing 1.3 megapixel camera.

The camera app is a bit innovative which gets very easy to use with passing times.

LG Nexus 4 is quite rich on the connectivity front as well with WiFi, 3G with support for up to 42 Mbps, Bluetooth 4.0, NFC (near field connectivity), GPS and wireless charging. However, it surprisingly misses out on the FM radio which is definitely a minus point in India. Another drawback is the lack of a micro SD card slot, which means you are stuck with around 12 GB of memory. 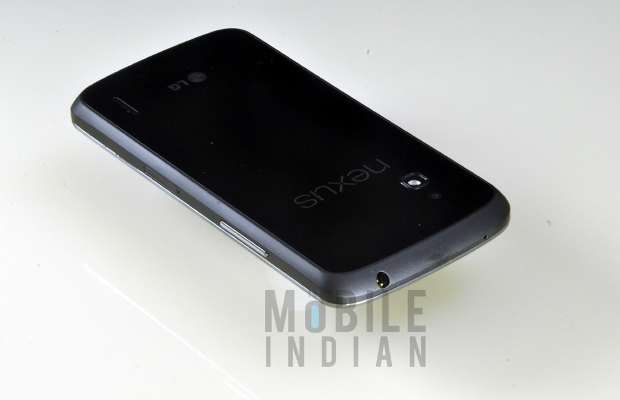 Nexus 4 also has some additional sensors like a barometer and a compass, apart from the regular ones like accelerometer, gyroscope, and ambient light. This means that the phone will give you a better idea of the weather around and also aid you in getting directions when you are out of network and can’t use Google Maps.

The Nexus 4 comes with stock Android 4.2 Jelly Bean and will be the first to get the next version of Android too. From the lock screen itself you can access notifications, basic settings, camera, and of course the home screen, with a single swipe. Inside, you will get many Google apps like Google Now, Maps, Play etc. 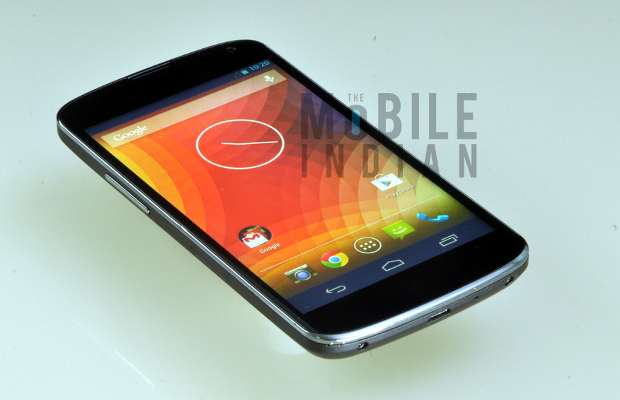 But there aren’t many apps other than that, which is a good thing because you can choose your own favourites without carrying along the preinstalled apps that you never use. The user interface is very smooth and well sorted, though you do lose on functionalities like dual camera video, and Qslide (which allows you to slide with your eye movements). Nonetheless, most of these functionalities will be available through apps at the Google Play store.

LG Nexus 4 comes with a 2100 mAh battery with a promise of up to 15 hours talktime on 3G, which is great. The phone easily serves for two days without the need to look for the charger with medium level of usage. Even for power users the phone will work for a day.

The phone offers very good performance, display and comes with a great price and promise of always having the latest Android version, which means that this phone is simply one of the best choice in the market today, even if you don’t have a budget constraint, you won’t mind saving Rs 10,000 plus on buying this handset as you will get everything that a smartphone can offer you today’s. 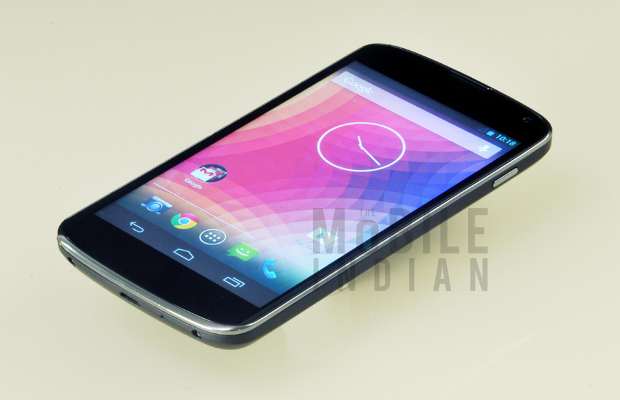 And yes it doesn’t have some of the features that Samsung offers through software gimmicks (dual camera, smart stay etc), but you can get the same functions by downloading apps if you need them, so that is something you won’t be missing. 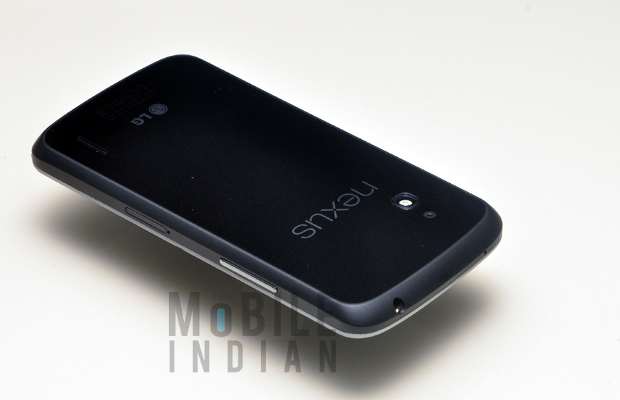 However the phone misses out on expandable memory and FM radio. Also, it has not the best camera, but then again the price point is just too good to ignore.