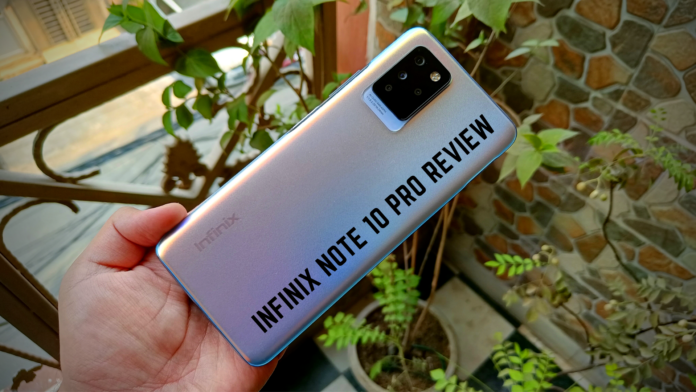 The name Infinix may not roll off the tongue right away if you think of budget phones, but the brand is upping its game with every launch. You may want to look at the brand’s most recent smartphone, Infinix Note 10 Pro, which even won a design award.

The Infinix Note 10 Pro already went on sale on June 24 with a pricing of Rs 16,999, and the phone comes in a single variant with an ample amount of storage and RAM.

The Infinix Note 10, which is a toned-down version of the Infinix Note 10 Pro had its own fair share of quirks and the major aspect where it lacked the punch was the software, in our opinion.

Is the Infinix Note 10 Pro riding on the same boat or does it manage to stand out? Let’s have a look at its review.

Let’s start the Infinix Note 10 Pro review with the display. An award-winning design should look beautiful and Infinix Note 10 Pro achieves that to some extent. The ‘Nordic Secret’ colour we got gives a gradient coloured look that switches colours between purple, golden, blue, and more, depending on where the light shines on the panel.

The other two colours get a different two-tone finish with a patterned lower back and a plain upper portion. In my opinion, though, the Black one would look the sleekest with a more professional look.

The Infinix Note 10 Pro is definitely not made for one-handed usage as it’s a huge phone for one-handed operations. Secondly, the build is still plastic which has been retained from the Infinix Note 10. But on the positive side, it has a matte finish which makes it feel more premium and even companies like Samsung have also used high-quality plastic in a Rs 50,000 phone, so that is not much of an issue. However, I would have liked it better if it wasn’t plastic and could have been frosted glass.

The phone isn’t that heavy, and the camera on the top left is fitted in a rectangular array that is ordinary looking. To conclude, we have seen this type of design in phones from other brands and this is nothing extraordinary, but it does look appealing in hand.

The huge 6.95-inch display on the front has a full-HD resolution with a 90Hz refresh rate, 180Hz touch sampling rate, and 480 nits of peak brightness. This display looks fine for the price and creates some sharp-looking images with accurate and punchy colours. Brightness was an issue on Infinix’s Hot 10S and this phone is no different as the brightness always had to be kept close to full, even indoors, for comfortable viewing.

With a high refresh rate and touch sampling rate, the panel was quick and responsive to my touch without any issues. The viewing angles were decent as well. The Infinix Note 10 Pro also gets TÜV Rheinland Eye Care certification for less blue light emission.

Performance is the space where Infinix has managed to keep things under its control and the Infinix Note 10 Pro is another proof of the same. The MediaTek Helio G95 paired with 8 GB of RAM performed well and matched my expectations for the most part. The app launches, animations, were all smooth, but the RAM management was a bit aggressive.

Even gaming performance was on par with other phones and I was able to play Call Of Duty Mobile at high graphics without any major frame drops, although some minor ones were present. However, the phone does get warm in the upper area while you play and might get a bit difficult to hold it at times.

Most of the operations were fine for connectivity, but I did face issues with Wi-Fi as the signals often dropped while holding the phone in landscape.

The dual speakers performed great and were loud. The music sounded very ‘full’. It didn’t lack the treble and the lyrics sounded clear while it lacked bass which I had expected.

Coming to the negatives, during the Infinix Note 10 Pro review, the phone often kept closing apps that made it difficult for me to keep up with my work. The apps had to load up from scratch because of which I even lost some of my docs which I didn’t save. And the second thing that has always bugged us about Infinix phones is the software.

Even though the software is filled with features up to the brim, the bugs and the user interface make it difficult to recommend this phone. The user interface just doesn’t match the standards of today where OEMs such as Oppo and Samsung have a more modern looking UI. In addition, Infinix’s proprietary software looks like it’s from the year 2015. It does pick up features from Android 11 but the implementation is just disappointing. And the bugs including app crashes, minor stutters while scrolling, etc ruined the experience.

We have been conveying this time and again that Infinix’s software needs to catch up and has to be worked upon a lot, but it seems like the brand prefers a more older UI that looks worse than how Android KitKat looked times.

A 5,000mAh battery backs the Infinix Note 10 Pro with support for 33W fast charging, while the charger has been included in the box. Even though the software isn’t the best looking, the company does know how to optimize it, which shows how the phone performed in this area.

The Infinix Note 10 Pro battery lasted me a whole day of heavy usage that included about 30 minutes of high graphics gaming, lots of browsing, video streaming, and more. With a screen on time of 7.5 hours, the battery life definitely won’t disappoint you on this phone. The phone took about 1.5 hours to charge from 15% to 100% with the bundled 33W charger which seemed fine.

The four cameras on the Infinix Note 10 Pro include a 64-megapixel primary sensor with quad-LED flash, an 8-megapixel wide-angle camera with f/2.3 aperture, a 2-megapixel mono camera and a 2-megapixel portrait lens. Along with a 16-megapixel camera on the front, Infinix has also included a flash for clearer selfies taken in the dark.

The camera app is fairly simple to use and all the modes are stacked up top in the hamburger menu. The main modes take the front seat, including AI Cam, Video, Portrait, Night mode, etc.

The shots taken using the primary camera come out to be average with the picture sometimes getting over-exposed. We felt the pictures also lacked colours and even lacked the natural tone. However, there was a decent amount of detail in the shots.

With wide-angle shots, the exposure problem was a bit more visible. And the colours were lacking in these shots as well. Apart from that, there was a considerable distortion at the edges while using the wide-angle camera that resulted in shots that didn’t meet our expectations.

With portraits and macro shots, the story was almost identical. The shots were high on detail but low on colour tones. Edge detection also took a hit when clicking portraits. We didn’t face even half of the issues on the Infinix Note 10 which is surprising considering it is the lower-powered counterpart of the Infinix Note 10 Pro.

Night Mode shots on the other hand, were decent with colours but there were almost no details in the shot, resulting in a lacklustre experience. The selfies when clicked in daylight played well with the colours but the detailing in the picture when zooming in was clearly disappointing. The selfie pictures were even noisy at times and again, the exposure issue persisted.

Under low lighting and artificial lighting conditions, the matter got even worse. There was no sharpness or details left in the picture, with the phone even struggling to focus on the subject. The colours were now close to natural but then the photos themselves looked like they were clicked from a phone that’s from 2015, just like the software.