Folding display Can run three apps together Battery Back up

I had spent around two and a half days with Samsung Galaxy Fold before returning it. So this article will be more of an opinion rather than a full-fledged review.

If we look at the initials report and reviews of the Samsung Galaxy Fold there were a lot of complaints about the durability, but the final product that has landed in India has taken care of most of them.

When Galaxy Fold was showcased for the 1st time, some reviewers accidentally removed this protective layer on display, but that is a thing of past. Samsung has now added an edge to edge protective layer on top of the screen. Secondly, Hinges now have caps on them to prevent debris and dust from entering the device. Also, a metal layer has been added below the display to improve rigidity.

The front screen, 4.6 inches, is tiny and feels like you are using a smartphone from 2010 but the 7.3-inch display is very immersive and lets you run three apps on the screen at once. Here I would like also to mention, that even after using the Fold as my primary device for two days I didn’t get used to the front screen as a go-to screen for most of the work that I do on the phone. I used it majorly for calling purpose, reading the notification and checking out messages. Whenever I wanted to type, respond to emails and messages, watch movies or pictures and click pictures ( will explain later) my go-to screen was the tablet screen. 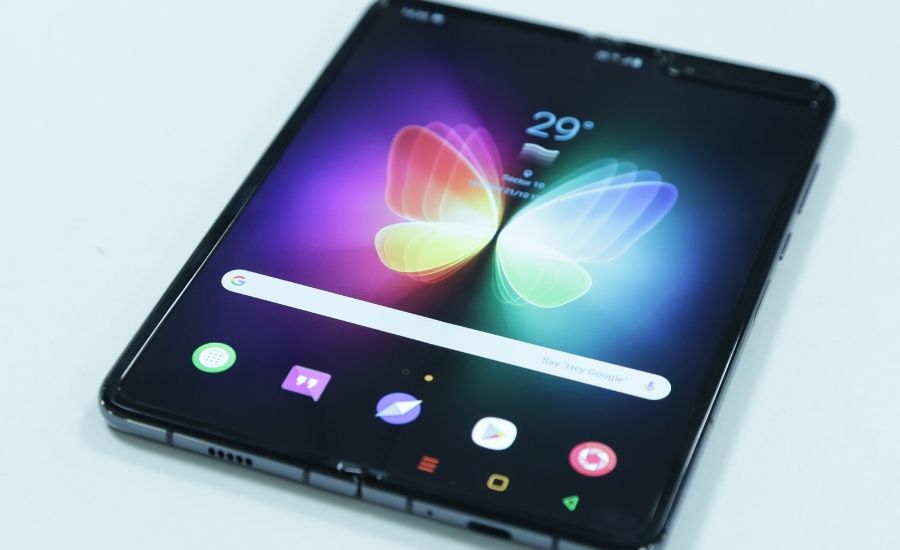 When folded, the Galaxy Fold is considerably thicker than other smartphones, which means carrying it is a bit of an issue. You cant keep it in the shirt’s pocket as it might fall and will attract a lot of attention because of the bulge and keeping it in the pant pocket is an option, but one has to get used to the weight. Having said that whenever I used the fold in public places, I suddenly made new friends as they started enquiring about the device and wanted to check it out.

If I talk about the battery backup, on an average, I was able to get around eight hours of battery backup on a full charge when I used the galaxy Fold extensively for multimedia consumption.

Thanks to dual-axis hinge, you can open this clamshell just like a book, transforming the Fold from phone to tablet mode. The motion is relatively smooth and natural. Also, closing the phone feels like closing a book and along with a clapping sound which feels good. Just in case you didn’t t know, the 7.2-inch display is made of plastic, not Gorilla Glass, like the front display. 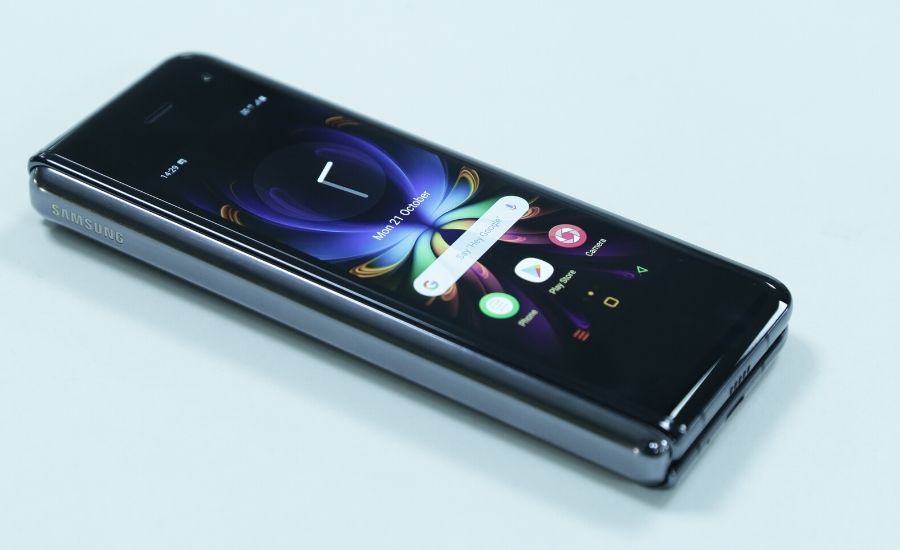 During the usage, I found the button placement to a bit off, Power button, volume keys and fingerprint scanner, as one has to adjust the holding style to access them. I preferred using facial recognition rather than fingerprint scanner to unlock the Fold because it’s simply faster and easier to use. The Fold has given the headphone jack a miss but to take care of its absence wireless Galaxy Buds are included in the box.

The interior 7.3-inch display is sharp and colourful, but the crease in the middle of the Fold’s screen is noticeable Especially when you use apps with a white background. It’s not an eyesore, just distracting and one can feel the crease while using the display.

The notch in the top right corner of the tablet display can hamper your viewing experience, but one can hide it by turning on an option in setting. It will create a black bar across the top of the screen.

The good part about using Fold is App Continuity, which enables you to open an app on the main display and then have the app immediately fill the tablet screen when you unfold the phone and vice verse. Here I would like to mention app continuity by default is off for tablet to the main screen. One has to enable it from the settings. 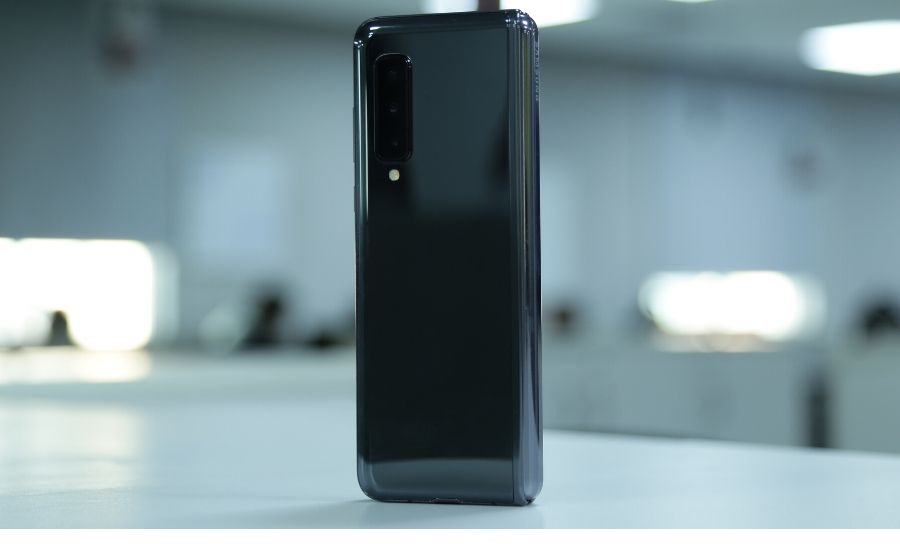 Another interesting feature in Fold is Multi-Active Window, which allows you to run up to three apps at the once large display. One can arrange and resize the app resize the apps. The only problem I encountered with multi-active windows was that I had to pin the app which required typing on the top; otherwise, the keyboards hides it. 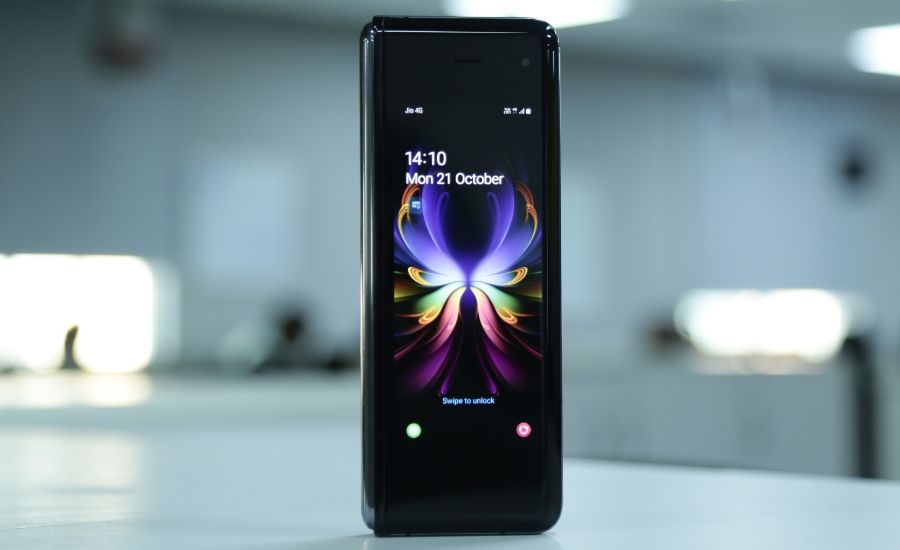 The six-camera setup of Galaxy Fold seems like an overdose of cameras. It has three shooters on the back of the Galaxy Fold: a 12-megapixel wide-angle camera, a 16-MP ultra-wide lens and a 12-MP telephoto lens; on the front, there’s a 10-MP camera; and when unfolded, another 10-MP primary camera plus an 8-MP depth camera for portraits.

Shooting with the Fold closed wasn’t a pleasurable task as framing shots on 4.6-inch screen was an exercise. On the other hand, when using the camera on the tablet mode, One had to use both the hands to hold the device, but the framing was not an issue.

The Galaxy Fold seems to be a step in the right direction. It is offering some new elements in the smartphone rather than adding on cosmetic changes which have become a norm in most of the smartphones launches nowadays. It has unfolded a new segment and going forward we might see consumers accepting it with open arms post the price correction because right now it is out of range for many consumers.