Yet another word guessing game to be played with a avatars and becomes addictive over a period of time.

Zynga, the creator of hysterical games like FarmVille and Cityville, has now released a new game for Google Android mobile platform &#151 Hanging with Friends. The game is available for free in Android Market.

Hanging with Friends is the modern day adaptation of the classic word game &#151 Hangman. For those who don’t know about either of the games, the gameplay involves guessing the word built by the opponent and then build a word for the opponent to guess.

Hanging with Friends is purely word-guessing game which is almost like a turn-based asynchronous multi-player version of the Hangman game. To get started, you will be asked to connect via Facebook or you can create your own different ID using your email address and also selected desired user name. After you’ve successfully logged in, choose your Avatar before you start off.

Once the avatar is chosen, one needs to ‘create’ (start) a game with an opponent. The app offers five different options to choose from. One can also log into Facebook and then play with friends. The second option is to let the app find a random opponent for you. 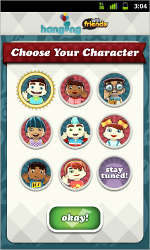 One can also search for a friend via user name which they commonly use or must have shared. For those who do not wish to play with strangers also have the option to choose the opponents from the contact list, which will require the app to access your contact list to scout for your friend who is needed to be registered for the game else you can send him an invite.

There is a Pass and Play option where in you can play with as many players you want by simply handing off your smartphone after relevant ‘moves’ to other players. Once the game is created the user is presented with two avatars representing him/her and the opponent &#151 both hanging in air by holding balloons. The game packs those typical Zynga style cute looking avatars and basic nice looking animated graphics.

This game involves two basic things. First, building an eight or less letter word for the opponent to guess and secondly, guessing the word correctly built by the opponent.

The game offers stack of 12 random letters to build word with up to eight letters which need to be dragged and dropped to the empty slots. In the eight letter word, the double letter and triple letter bonus is placed randomly. Once the word is created you can send it over to your opponent to solve it. That means the ball is in opponent’s court, metaphorically. 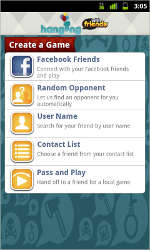 Four or five letter word offers more strikes whereas the eight letter word gives out less strikes. To help solve the word, the game offers three different ‘lifelines’ out of which only one can be used for at a time. One of the three lifelines eliminates four wrong tiles out of all 26 letters available. Once the opponent has finished his move, the sender of the word gets to replay and watch whether the opponent was successful or not. Second one highlights one of the four letters in the word and the last one simply allows removing one strike for false selection of letter.

Surprisingly, there are no points on winning or solving words. Solving the word is certainly based on the intelligence and skill of the user. However, the library of the word is limited and it won’t allow you to set names as mystery word. If either of the players fails to predict the word then the balloon of the respective avatar pops and the character falls down a bit.

Most interesting part of this game is that one can have a direct chat with your opponent. Also you will receive push notifications for your turn. One can play up to 20 games at a time with friends.

The app of Hanging with Friends game has been freshly released so some bugs could be a bit annoying. Getting started could be also jittery but one can easily pick up the pace. The only pitfall of it is the limited library of words and once that is expanded, the fun could be limitless.

Hanging with Friends is one of those easy to catch up social game that becomes strategically interesting and heavily addictive over a period of time. Free version of the app comes with ads whereas the paid version removes those ads.