The app is clean, easy to use for beginners and heavily functional along with super-integrated settings for notifications.

Google+ app will be usable only to those who are registered with the Google+ service. When you start the app, it asks for your Google email address and password. The homescreen interface of the Google+ app is neat with only five tab-buttons: Stream, Huddle, Photos, Profile, and Circles. Notifications are shown at the bottom of the app and it acts like a drawer similar to Android’s notification drawer. Now let’s take a look at each button and its function.

All posts that include text, images, URLs, links to videos and location are presented in a wide column in the center, which is called the Stream. It is a neat looking timeline with minimum information on it. So posts from any one, including those written by the owner of the Google+ account, will appear on that screen. The Nearby option on the top shows posts from people who are close to your physical location. Similarly, the Incoming option shows posts from people who have added you but have not been added by you. 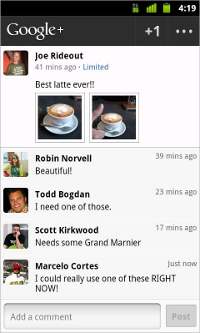 On top you’ll see a Tick icon which stands for Check-in, allowing you to check-in at a particular place. The Camera icon is meant to quickly upload and share photos in your stream. And there is a Pencil icon for composing a new post, wherein the user gets a text box on the top followed by Location, (provided the device GPS is on) and one can also attach photos to that post by clicking a new one or selecting one from the phone itself.

Also, you can check on the arrow just below the Post button to select the Circles to whom you wish the post your message.

Just like several Social Networks have Lists and Groups Google Plus has Circles. The Circles icon will give you a list of all the existing and new Circles you have created along with the number of users in each Circle. You can add people to a Circle by tapping the icon on the top right corner of the app.

By default, Google+ has five Circles &#151 Acquaintances, Family, Following, Friends and Work. These are comprehensive enough for basic classification of friends. You can also add the same person to more than one Circle. Clicking on the People tab will show you a list of people connected to you and then you can tap on View Suggested People to add new folks. 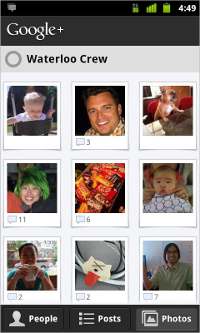 Huddles is the group chat option which shows up as a separate app on your device. Using huddle you can ask people to join group chat and can invite them by finding them via name or email. The best part is that whether you are a creator or just a participant you can always add more people to Huddle. Every Huddle is like a conversation session and it stays there until you leave the conversation. Do note that simply closing the Huddles app doesn’t remove you from conversations. In Huddles, you can see the list of participants on top.

At this moment, you can only leave those Huddles that have been created by you. Other huddles won’t get cleared from your list unless the creator removes them.

Google Plus’ Photos is one of the distinct features of the app. If you have clicked a photo using your phone camera, the Google Plus app caches and uploads that picture online to your Google+ account. The picture is then visible only to you and not to anyone else. This feature can be enabled by choosing the Instant Upload option in the Settings of Google Plus app. You can always customise instant upload’s settings to make the process faster, and can save some bucks by disabling instant upload when you are on roaming.

So when you click on the Photos button in the Google Plus app you see four albums: from your Circles, photos of you, your albums, and from your phone. Here the limitation is that at a time one can share not more than eight photos. The good part though is that it doesn’t matter what size the photos are.

On each photo under Albums you will see the number of comments received, which can be checked by tapping on the respective image.

Google Plus is really useful for people who wish to use a nonsense-free application without gut-loads of features. No need to master hidden gestures or short cut tricks. Everything is neatly placed and the app’s performance is nice &#151 considering you are on WiFi or 3G networks. The app is clean, easy to use for beginners and heavily functional along with super-integrated settings for notifications.

The Google+ app is certainly recommended to Android users. Google+ app for iOS has been submitted for review so in the coming weeks we can expect to see the app for iPhone and iPad devices as well.