Cutting ropes, popping balloons and pumping air is all you need to do for feeding a cute Om Nom with a candy.

Gaming is one such medium that has made even physics haters fall in love with physics all over again. An example that can be cited for use of physics in casual style game play is the Angry Birds.

Cut The Rope is one such physics based games from the Zepto Labs, the developers of the game. You might have come across this game’s icon but probably decided against downloading it after checking the frog like creature on its icon &#151 Om Nom. 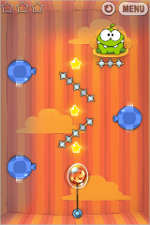 The puzzles in this game are pretty different and based on simpler physics which makes the gameplay interesting and challenging at times. Graphics are quite adorable and the colour tone is well-balanced by leaving out loud colours.

Games always have that rewarding tendency for those who put a little extra effort to achieve the tasks. Similar is the case here but the only thing is one has to procure all stars in all levels in order to turn golden.

The game play requires the player to collect all stars from the each level and eventually feed the candy to the Om Nom character. The supporting elements in each level are some key elements that are meant to be used with precise timing and super delicate control in order to manipulate the candy to take the stars. The ropes, bubbles and the air pumps are need to be chopped, popped and tapped respectively to manoeuvre the candy. 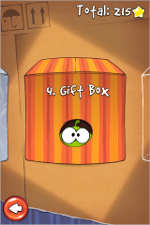 Using the different supporting elements, one must make the candy jump, float, swing or fall around. Be careful with the spikes, movable pegs and electrical areas in the different levels. The difficulty level and challenge becomes difficult as one moves further in different boxes. That makes anyone put the some concentration and thoughts before randomly tapping the screen.

Its engaging gameplay becomes challenging with every level and also frustrating at times, making every second worth spending. Its heavily addictive nature will certainly make you bit sharp with puzzles and quick with fingers on the touchscreen over a period of time. You can share your score with others through the Game Center.

One good part about the game is that it is more challenging than the Angry Birds which honestly becomes bit boring and redundant (of course, the opinion may differ) after certain levels.

Cut The Rope is available in Apple App Store for $0.99 (Rs 48 approximately) and certainly one of the must-have games on your iPhone, iPod touch and even iPad. The same game is also available for the Android but due to diversity of hardware and software update, the game at times gives hiccups to the users.