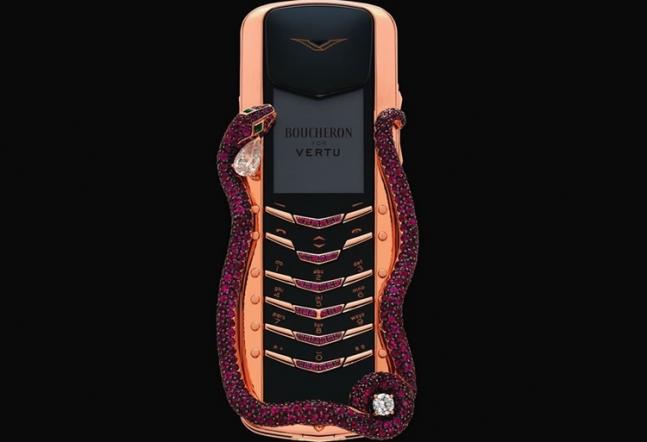 Vertu Signature Cobra Limited Edition phone launched online at a whopping price of Rs. 2.3 Crores. The phone will be delivered by helicopter.

Vertu, the luxury phone brand, has unveiled a new limited edition feature phone, the Signature Cobra. While industry watchers are yet to make up their mind on whether to brand Vertu owners ‘friends of trump’ or just plain crazy, the company has nevertheless gone ahead and announced the new launch.Predictably, the new Vertu Signature Cobra Limited Edition phone has been priced at an awe-inspiring Rs 2.3 crores. For Vertu, a firm that has built its reputation solely on the pricey and exclusive nature of its phones, the Cobra continues its legacy of devices that probably don’t even deserve to be called devices. Just a hushed ‘Vertu’ should do, for what is essentially a piece of expensive jewellery. That talks.

The Limited Edition phone will be available to buy after a down payment of roughly Rs 10,000. Buyers then have to pay the rest of the amount upfront. Another gimmick introduced by Vertu with this phone will be delivery by helicopter, which is feasible considering the price of the phone. Considering the state of the property market in this part of the world, it’s a wonder the firm did not throw in a 1 BHK in a great locality too.

Vertu is only going to make 8 units of the phone available across the world. Which makes you wonder about the need for a release at all. Though it probably helps to keep counterfeiters in check, we imagine. GizChina has reported that only one will be made available in its home country of China. No other details about the phone have been released. Of course, ownership is so exclusive that even the paparazzi have not been able to get the names out, or perhaps they just found cheaper pursuits.

The Vertu Signature Cobra has been designed by a French jewellery brand Boucheron. Some of the highlights of the new phone are the cobra design it features which is made up of 439 rubies. Being true to its name, the phone has a cobra design around the front with two emeralds making up the eyes of the cobras. Design-wise, the Vertu Signature Cobra Limited Edition closely follows the design cues and build of the original Signature phone.

GizChina reports that the new Vertu phone features 388 different parts and is assembled in the UK. The company is said to use manual assembly in order to ensure precision and quality, and of course exclusivity. In fact, we imagine a story about the Vertu would not be complete without mentioning the word exclusivity at least 4 times, hence this extra line.