Samsung Galaxy A50 update brings August Android security patch as well as bug fixes and improvements to the phone.

After recently rolling out an update, Samsung has again rolled out a new software update to its Galaxy A50 smartphone. The update brings August Android security patch as well as bug fixes and improvements to the phone.

The new update improves the performance of the touchscreen and the charger/USB port’s moisture detection algorithm. The latter feature will automatically disable charging if the sensor detects moisture inside the port. 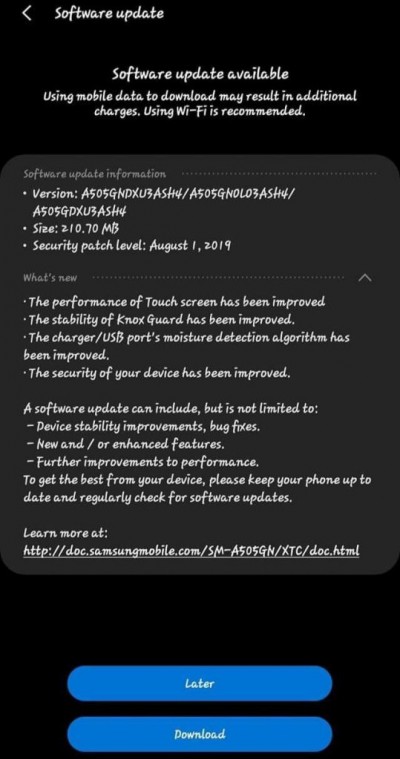 The firmware version for the latest update is A505GNDXU3ASH4 and is 210.70MB in size. Since it is rolling out via OTA, it may take several days to reach all the units. In order to check for the latest update, users can go to Settings > Software Update > Download and Install.

To recall, theGalaxy A50 was launched in India in February along with Galaxy A30 and Galaxy A10. It features a 6.4-inch (2340 x 1080 pixels) Full HD+ Infinity-U Super AMOLED display. It is powered by a 2.3GHz octa-core Exynos 9610 10nm processor. It features an in-display fingerprint sensor.