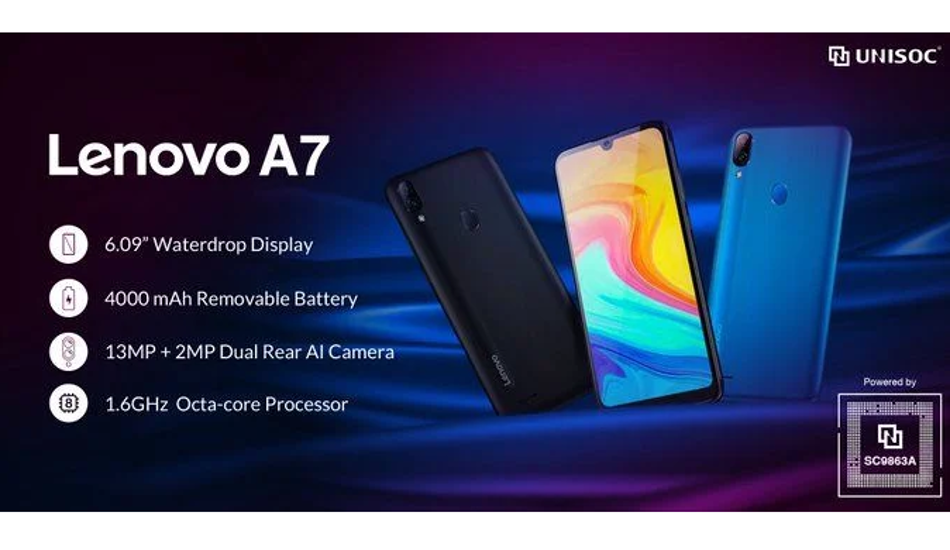 Lenovo has launched Lenovo A7 in the Middle East, and subsequently listed in Europe and Africa. The Lenovo A7 comes in black and blue colours. However, the pricing and availability of the Lenovo A7 phone are not revealed at the moment.

As for the specs, the Lenovo A7 features a 6.07-inch waterdrop display with 87% high screen ratio design. The resolution is not revealed but as per Google Play Console listing which surfaced last month, the phone will have a 720 x 1560 pixels HD+ resolution and a pixel density of 320 ppi.

The smartphone is powered by 1.6GHz octa-core Unisoc SC9863A processor with PoweVR IMG8322 GPU. The listing also revealed that it has 2GB RAM and runs on Android 9 Pie OS. A fingerprint reader is available on the backside of the device.

The A7 comes with a 6.09-inch waterdrop display, 4000 mAh high-capacity removable battery with up to 416-hour standby time, a 13MP + 2MP dual rear camera and a 5MP front camera. pic.twitter.com/2tksgEDTGf

The phone is loaded with a 4000mAh removable battery with which the company claims to offer 10 hours of audio playback, 57 hours of talk, 416 hours of standby and 84 hours of music playback time.

On the camera front, the Lenovo A7 is equipped with a dual-camera setup with a combination of 13-megapixel primary lens and a 2-megapixel depth sensor. For the front, the phone is loaded with a 5-megapixel selfie shooter housed inside the waterdrop notch. The camera supports AI intelligent scene recognition, can identify 12 types of scenes, and automatically adjusts the camera parameters according to the scene recognition results, allowing users to take more photos Good photo.