Let’s do a comparison of LavaAgni 5G vs Realme 8s 5G to find out which one fares out to be the better one. 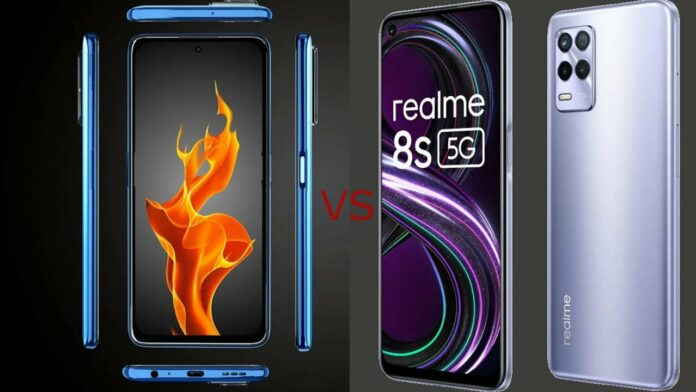 Indian smartphone maker Lava recently launched Lava Agni 5G as its first 5G phone at Rs 19,999. However, as a part of an introductory offer, those who pre-book the phone before November 17 will get it for Rs 17,999.

The smartphone comes with MediaTek Dimensity 810 SoC and includes features such as quad rear cameras and 30W fast charging support. The Lava Agni 5G competes against the Realme 8s 5G, Moto G 5G, and the Samsung Galaxy M32 5G. So let’s compare LavaAgni 5G vs Realme 8s 5G to find out which one fares out to be the better one. Furthermore, the comparison would help you understand how Realme 8s 5G stands against Lava Agni 5G and which one should you buy.

Lava Agni 5G currently comes in a single variant that features 8GB of RAM and 128GB of storage. It can be purchased in Fiery Blue colour only.

Realme 8s 5G comes in two RAM variants – 6GB RAM and 8GB RAM with 128GB storage. They are priced at Rs 17,999 and Rs 19,999, respectively. It can be purchased in Universe Purple and Universe Blue colours.

So, both smartphones are available at the same price for the same storage configurations. However, Realme is offering you another 6GB RAM variant which is a plus point.

The Lava Agni 5G smartphone features a punch-hole display at the top-centre position. At the back, there is a rear camera module that is aligned vertically along with a dual-LED flash. A fingerprint sensor also doubles as a power on/off button on the right side.

The Realme 8s 5G offers a punch-hole display, which is located at the top-centre position. In addition, one will find a square-shaped triple camera module at the back panel.

The Lava Agni has a large display as compared to Realme 8s. It features a massive 6.78-inch LCD punch-hole display that offers an FHD+ resolution of 1080 x 2460 pixels, a 20.5:9 aspect ratio, and a 90Hz refresh rate. The screen also supports a 91.7 per cent screen-to-body ratio along with Corning Gorilla Glass 3 protection.

The display present on the Lava Agni in no doubt bigger than Realme 8s. So people who like a big display phone with a punch-hole in the center can opt for the new Lava phone.

The Lava Agni 5G is the company’s first smartphone that offers 5G connectivity. The phone is powered by an octa-core MediaTek Dimensity 810 SoC, along with 8GB of RAM. The handset runs on the Android 11 operating system. It is claimed by the company that you will get a stock Android experience with this device.

The Realme 8s 5G is powered by the MediaTek Dimensity 810U 5G chipset based on the 6nm process. The handset is loaded with up to 8GB of RAM and 128GB of internal storage. The dynamic RAM expansion offered in the device allows expanding the RAM up to 5GB in both variants. In addition, realme has provided 128GB onboard storage in both models. The Realme 8s 5G runs on Android 11 with Realme UI 3.0 on top of it.

The Realme 8s supports additional storage expansion of up to 1TB, while the Lava Agni 5G only supports 256GB external storage. In addition, both offer security features like face unlock and a side-facing fingerprint scanner.

In terms of performance, both phones come with similar octa-core chipsets based on the 6nm process. But on the other hand, Realme 8s comes with an expandable storage option compared to the Lava Agni.

Since both the phones run on Android 11, topped over by their respective skins, nothing compares. Therefore, the final choice purely depends on your preference.

The Lava Agni 5G comes equipped with a 5,000mAh battery and supports 30W SuperFast charging technology. The Realme 8s 5G, on the other hand, packs a 4,880mAh battery with a slightly better 33W fast charging support.

Lava Agni 5G comes with the quad rear camera setup that houses the 64-megapixel primary sensor and an f/1.79 six-piece lens,5-megapixel wide-angle shooter, a 2-megapixel depth sensor, and a 2-megapixel macro shooter. You will also get preloaded camera modes, including an AI Mode, Super Night, and a Pro Mode. On the front, you get a 16MP AI-enabled selfie shooter.

Realme 8s 5G offers a tripe-camera setup on the rear panel. It consists of a 64-megapixel primary Nightscape shooter, a 2-megapixel portrait shooter, and a 2-megapixel macro shooter. As you can see, it does not have a dedicated ultra-wide-angle lens. The phone also sports a 16MP sensor at the front of the device for selfies and video calls.

Although we have not reviewed these devices, we can’t say much about them. Going by the sheer specifications, the Lava Agni 5G Plus seems to be a better option as it it has a wide-angle lens. The Realme 8s, sadly, misses out on ultra-wide-angle lens in its triple-camera setup. Lava Agni has a clear edge over the Realme 8s here with better cameras. On the front, both have the same 16MP sensors.

Lava Agni 5G vs Realme 8s 5G: Which one should you buy?

The Lava Agni 5G is an budget 5G phone packed with good specs and design. You get a large display and better camera features on the new Lava device.

The Realme 8s 5G is also a decent option to consider when it comes to better-charging speed. The smartphone also comes in two different RAM variants and two colour options, so the users have more choices here.