OnePlus has confirmed that the OnePlus 9RT and OnePlus Buds Z2 TWS will launch in India on January 14th at 5PM. 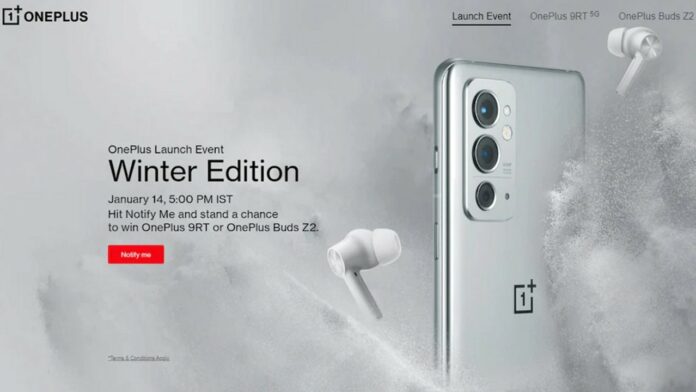 The OnePlus 9RT and OnePlus Buds Z2 will be launched at the virtual Winter Edition launch event set on the said date at 5 pm IST. The launch will be live-streamed on OnePlus India’s YouTube channel. There is a ‘Notify Me’ page on the OnePlus website and Amazon as well for the updates for the launch.

As for software, the handset runs Android 12 with ColorOS 12 on top. There’s also a 4500mAh battery with Warp Charge 65 Fast Charging.

The OnePlus Buds Z2 come with Adaptive Noise Cancellation that cancels noise up to 40dB. They also have support mono mode and transparency mode.

OnePlus’s Flash Charge technology can give you 5 hours of music playback from a 10-minute charge. The TWS earbuds are IP55-certified, though the charging case has an IPX4 certification.