The brand says that it will only focus on the mid-range and flagship segments from now on.

Sony has reportedly confirmed to drop the ‘Premium Standard’ segment, which usually consists of Xperia X and Xperia Compact, from its smartphone portfolio.The brand says that it will only focus on the mid-range and flagship segments from now on.

For the unintended, the Premium Standard segment was focused on offering flagship-level specifications at a reasonable price point. However, the segment failed to garner the much-needed praise and end up with lacklustre sales. According to a report, these models were popular in Japan and accounted 85 percent of its sales figure, but in the international market, it was only able to get 31 percent. With these less than average sales figures, the company chose to shut down the segment altogether. 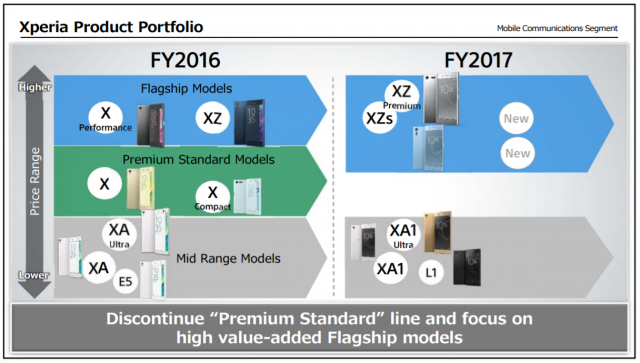 Further, with this move, the brand also hopes to differentiate its products “with technologies that only Sony can deliver”. It is a well-known fact that Sony is trying its level best to gain a respectable market share in the smartphone market and the report further adds that it will focus select markets including India, where it can leverage its brand strength.