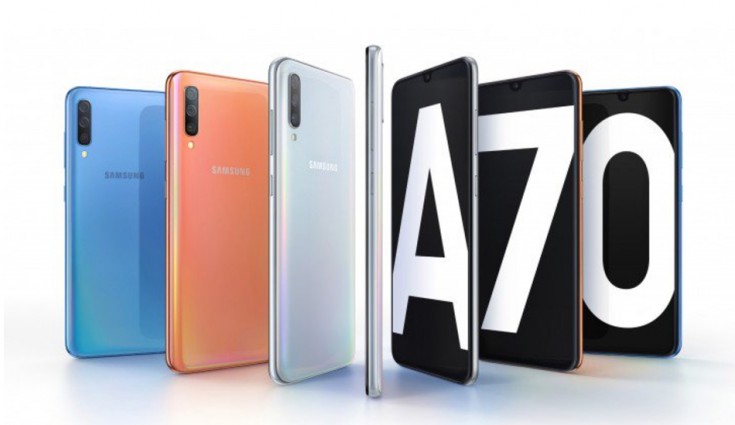 Company started the pre-booking of the Galaxy A70 on April 20 and ended yesterday. Customers who pre-booked the new smartphone is going to get the Samsung U Flex Bluetooth device at a discounted price of Rs 999.

Samsung had announced Galaxy A70 smartphone in India last month with a price tag of Rs 28,990. Now the smartphone is available for purchase through Samsung official website, Samsung Opera House, offline retailers and Flipkart.

The company started the pre-booking of the Samsung Galaxy A70 on April 20 and ended yesterday. Customers who pre-booked the new smartphone are going to get the Samsung U Flex Bluetooth device at a discounted price of Rs 999, against its original price of Rs 3,799. The phone is available in Black, Blue and White colour options.

As far as specifications are concerned, the Galaxy A70 has a 6.7-inch Full HD+ Super AMOLED Infinity-U display with a resolution of 1080 x 2400 pixels. The smartphone is comes equipped with octa-core Snapdragon 675 processor alongside 6GB of RAM and 128GB of internal storage, which can be further expanded up to 512GB via microSD card slot.

The USP of Galaxy A70 is its camera setup, which sports a triple-sensor at the back panel, with a combination of 32-megapixel primary camera with f/1.7 aperture, an 8-megapixel ultra-wide lens with f/2.2 aperture, 123-degree field-of-view and a 5-megapixel depth-sensing camera with f/2.2 aperture. For the front, there is a 32-megapixel selfie shooter with f/2.0 aperture. The smartphone gets its juices from a 4,500mAh battery and runs on Samsung One UI based on Android 9 Pie with Night Mode, Samsung Pay, Knox, and Samsung Pass. There’s an in-display fingerprint scanner on the front which works with Samsung Pass and lets you sign in to apps with just your fingerprint.

Galaxy A70 also features Samsung’s intelligent Scene Optimizer which analyses a scene across 20 modes and adjusts the colour, contrast, and brightness to optimise image quality. The smartphone comes with Widevine L1 Certification for streaming of true HD content and it is equipped with Dolby Atmos to provide a 360-degree surround sound experience.