According to the listing, OnePlus 5 will run on the latest Android 7.1.1 Nougat and will be powered by the latest Qualcomm Snapdragon 835 processor along with Adreno 540 GPU

OnePlus 5 has been doing rounds on the internet for a while now. After paying a visit on GeekBench, the upcoming smartphone from OnePlus has been spotted on AnTuTu benchmarking, revealing some key specs of the device.
According to the listing, OnePlus 5 will run on the latest Android 7.1.1 Nougat and will be powered by the latest Qualcomm Snapdragon 835 processor along with Adreno 540 GPU. Further, the OnePlus 5 will bear a model number A5000. 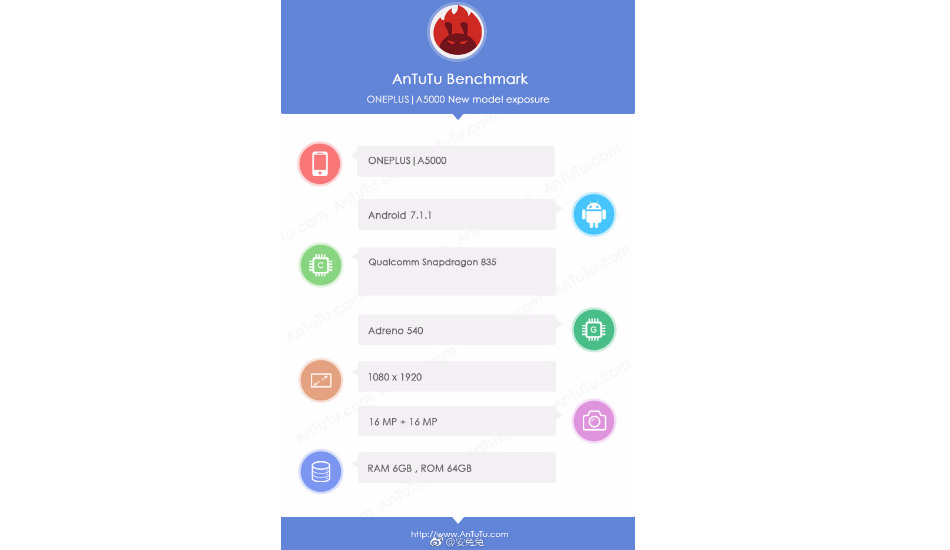 However, the bone contention lies in the display department. The listing reveals that it will boast a Full HD display with a screen resolution of 1080 x 1920 pixels, which contradicts previous rumours predicting a Quad HD display for the upcoming flagship device. The listing further shows that the device will be backed by a 6GB of RAM and 64GB of internal storage, which is not in the line of the previous reports that claims an 8GB of RAM on the OnePlus 5 along with 128GB storage option.
The benchmarking listing further states that the device will come with a 16-megapixel front and rear cameras, which is contrary to previous rumours that claimed a 23-megapixel rear camera on the device. Furthermore, some report also mentions that the device might sport a dual-camera setup.
Earlier, it was reported that it will come with a bigger 3600 mAh battery (Evan Blass leaked a 4000 mAh non-removable battery). Interestingly, similar to what we saw on OnePlus 3 and 3T, OnePlus is likely to go with a front-facing fingerprint scanner at the front. OnePlus is also expected to introduce the new Dash Charge 2.0.
Regarding the availability, a summer launch doesn’t necessarily mean next month (June). The official launch might happen sometime later than that say July or even August and we expect OnePlus to bring the OnePlus 5 soon after it is launched globally.