A new leak has emerged online showcasing the retail box of the device along with all the box contents and live images of the device.

It is a well-known fact that Motorola is destined to launch the Moto Z2 Play pretty soon and as we are heading towards the launch of the upcoming device, a new leak has emerged online showcasing the retail box of the device along with all the box contents and live images of the smartphone.
Starting with the retail box, the packaging comes in red colour and the Moto Snaps are mentioned on the front of the box in Spanish, which means that the device will support Moto Mods as well. On the side, there is Lenovo branding as well. Inside the box, one will find a phone with the plastic on display with the specification mentioned on it. Then there is Turbo Charger along with USB cable, earphones and some warranty papers. 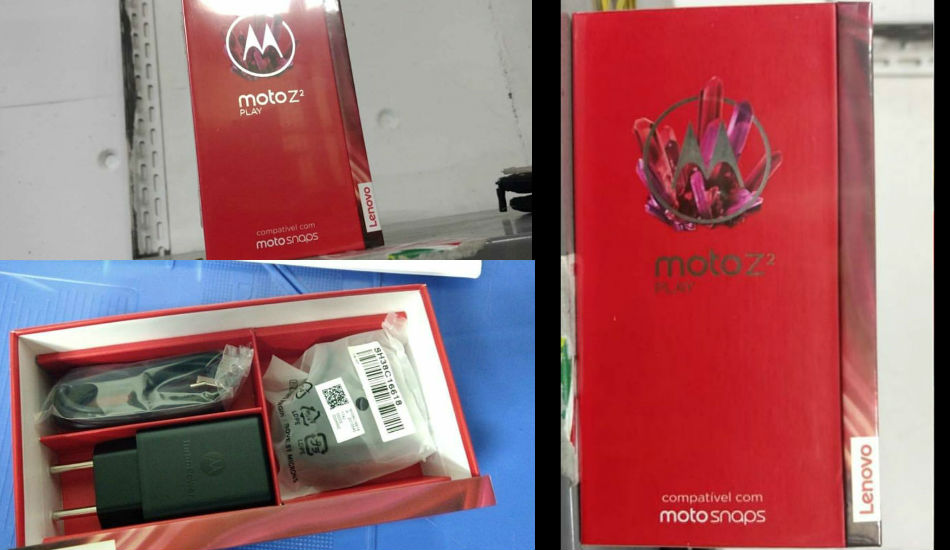 Talking about the device, the plastic on display reveals almost all the specifications. To start with, it will a 5.5-inch Full HD display with a screen resolution of 1080 x 1920 pixels. There will be a 3000mAh battery with Turbocharging feature coupled with a 12-megapixel dual autofocus pixel and laser autofocus at the rear. The phone has a fingerprint sensor at the front, which could also act as a home button. There will be a 4GB ofRAM and 64GB of internal storage.
The device design language is pretty similar to its predecessor, the Moto Z Play, meaning that you get the magnetic pins, which are intended to attach the Moto Mods at the bottom of the rear panel. The volume controls and power on/off buttons are on the right. The front panel sports a flash along with an earpiece and front camera at the top, while at the base you have a fingerprint sensor, which could boast a similar gestures features, which we saw in the Moto G5 and Moto G5 Plus.
Meanwhile, the Moto Z2 Play press renders were leaked online, which showed that the device might be unveiled on June 1. The renders also revealed that the smartphone would come in white/gold, black/grey and white/silver colour options. Recollecting some specifications, the device is rumoured to be powered by the Qualcomm Snapdragon 626 processor, an upgrade from the Snapdragon 625 present in the Moto Z Play.