The new leaked images reveal that the Meizu MX7 will feature an in-display fingerprint scanner and a curved display on its sides.

Two new images have been leaked of the alleged Meizu MX7 smartphone which reveals that the smartphone will launch on October 11, as per a report of Gizchina. The Meizu MX7 is the successor of Meizu MX6 which was launched in China last year. The successor was earlier expected to be unveiled in July this year, but we did not see any launch then.

The new leaked images reveal that the Meizu MX7 will feature an in-display fingerprint scanner and a curved display on its sides. We advise our readers to take this information with a pinch of salt as the teaser posters were not released officially by Meizu and were also not found on any of Meizu’s official Weibo handles. 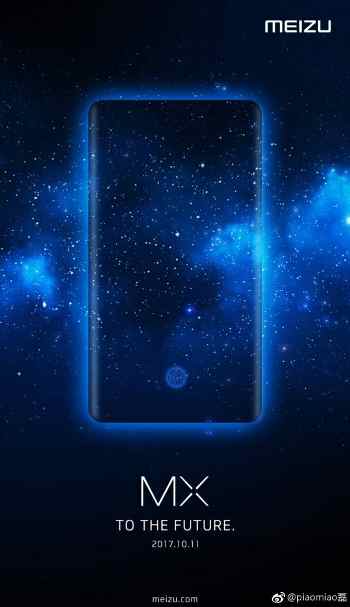 The Meizu MX7 was earlier also leaked in images this year. As per those leaks, Meizu MX7 smartphone will feature Meizu’s mBack home key below the device’s display which will double as a fingerprint scanner. With thin bezels, the sides of the smartphone are slightly curved which hints at 2.5D curved glass on top of its display.

As per rumours, Meizu MX7 will feature a metal body and will come with 4GB of RAM. The smartphone is expected to boast a 5.7-inch QHD display (2560 x 1440 pixel resolution). The device will be powered by either a MediaTek Helio X30 or Snapdragon 660 chipset, rumours suggest

For the optics, it will reportedly boast a 21-megapixel rear camera placed on the back of this phone. For the front panel, the device will boast 5-megapixel camera. Furthermore, the smartphone may feature Meizu’s mBack home key below the device’s display. It is rumoured to be running on Android Marshmallow or Android Nougat operating system with the company’s Flyme UI on top of the smartphone. A Type-C USB port and a 3.5mm headphone jack will be placed on the bottom of the Meizu MX7.