The Meizu M5X has 3GB RAM and an older Qualcomm Snapdragon 617 chipset.

Meizu had launched Meizu M6 Note in August this year in China. Now the company seems to be working on a new smartphone which is named as Meizu M5X. The mysterious smartphone has been spotted on a GeekBench benchmarking website. The listing has spilt some beans on the expected specifications of the upcoming smartphone.

In the GeekBench listing, the Meizu M5X got 1409 points in single-core test and in multi-core test it received 3795 points. As per the listing on Geekbench, the Meizu M5X has 3GB RAM and an older Qualcomm Snapdragon 617 hexa core processor clocked at 1.65 GHz. The handset is based on the Android 7.1.2 Nougat operating system. 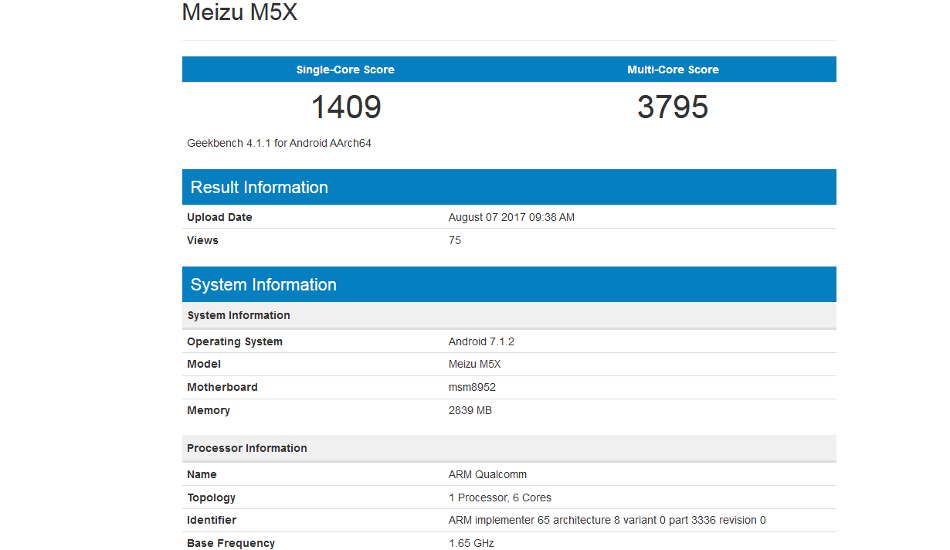 The Meizu M6 Note gets its strength from a 4000 mAh battery and comes with mCharge 18W fast charging technology. On the camera front, it comes with dual rear camera setup with 12-megapixel with high-end Sony IMX362 or Samsung 2L7 CMOS camera sensors, dual-tone quad-LED flash, f/1.9 aperture, 1.4um pixel size, 6P lens and 5-megapixel with f/2.0 aperture. On the front, it has a 16-megapixel camera for selfies and video calling with f/2.0 aperture, 5P lens. The smartphone houses an (mTouch) fingerprint scanner, which is integrated into the home button and claims to unlock smartphone in just 0.2 seconds. This smartphone supports 4G network with VoLTE and offers Hybrid Dual SIM, WiFi (802.11 a/b/g/n), Bluetooth 4.1, and GPS. The smartphone measures 154.6 x 75.2 x 8.35 mm and weighs 173 grams.