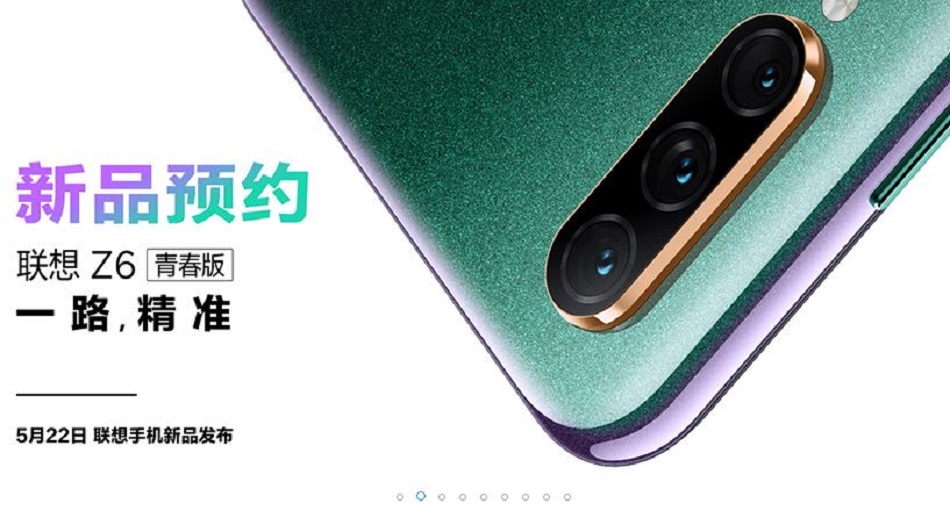 Few days back we have reported that Lenovo is all set to launch the lighter version of its recently launched flagship Levovo Z6 Pro smartphone, dubbed as Lenovo Z6 Youth edition May 22 in China. Now company has posted another teaser on its official Weibo page announcing that the smartphone is now open for reservations on its official website, Jingdong and Tmall. Further in the post, company revealed that the launch event will be held in Beidou Technology Park on May 22.

Further, in recent teaser,Lenovo Group Vice President has revealed that the company will launch new smartphone armed with Qualcomm Snapdragon chipset, which is not yet available in the market, which suggest that smartphone might bepowered by therecently launched Snapdragon 730or Snapdragon 730G chipset.

In the earlier teaser, company confirmed using Beidou dual-band GPS technology in this upcoming smartphone, which uses L1 and L5 frequencies to accurately track the location.

As per official website, the smartphone Lenovo Z6 Youth Edition has gone through 8-layer nano-scale NCOC optical progressive plating process and will have a AI triple rear camera setup with combination of 16-megapixels primary sensor, a 5-megapixels wide-angle lens and an 8-megapixels Telephoto lens. The phone will have a rear mounted fingerprint sensor alongside LED flash and will comes with stereo speakers with support for Dolby Atmos for surround sound. Further, the smartphone will get its juices from a 4050mAh battery and will come equipped with HDR 10 technology.

Further, it comes with an AI quad rear camera setup with a combination of 48MP primary Sony IMX586 sensor, a 2MP depth sensor and other two 16MP and 8MP sensors for ultra-wide-angle and telephoto zoom photos. On the front, it has 32MP single sensor which also supports face unlock feature. Hyper Video feature let you capture videos through rear as well as front cameras. The device runs on Android 9 Pie with Lenovo’s ZUI 11 out of the box and carry 4000mAh non-removable battery with 27W super fast charging through a Dual USB-Type C port and also supports reverse charging. Moreover, Z6 Pro comes with stereo speakers with support for Dolby Atmos for surround sound. Connectivity options include Dual SIM, VoLTE, Type-C port, Bluetooth 5.0, WiFi and a 3.5mm headphone jack. The smartphone measures 157.5 x 74.6 x 8.65mm and weighs around 185 grams.